How do I 'break' a film camera in order to get double exposures?

Film cameras typically refuse to double expose on the same frame of film. Let's take the Olympus trip 35 as the example. They're cheap as chips and don't expose unless you wind on the film. What part of the camera mechanism do I need to "modify" (destroy!) to allow it to expose as many times as I want without winding on the camera.

P.S. I know there are cameras like the La Sardina that take double exposures without modifications, and that you can re-roll the film and shoot over it again. This question is more about how to modify a camera to get a double exposure, not how to achieve a double exposure.

Not the same camera in these photos, but the button Stan mentioned should be there in your Olympus too.

Location of the rewind release button: 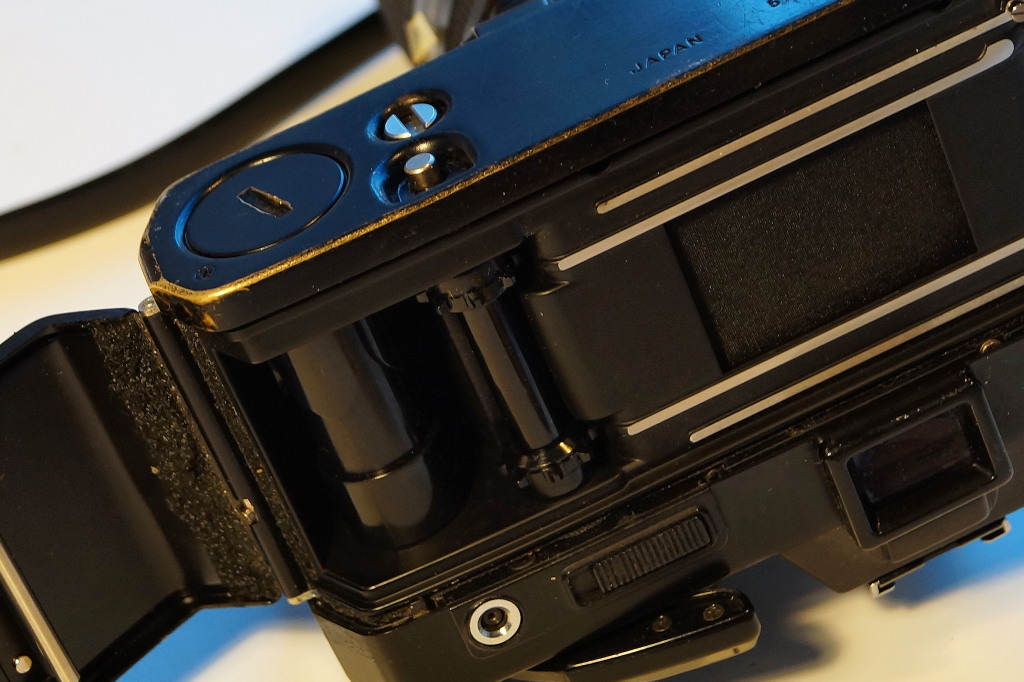 ^^ The release button is right there, underside of camera, where the sprocketed axel is inside the camera. Small detention around the button. Keep the button pressed down while you cock the shutter. 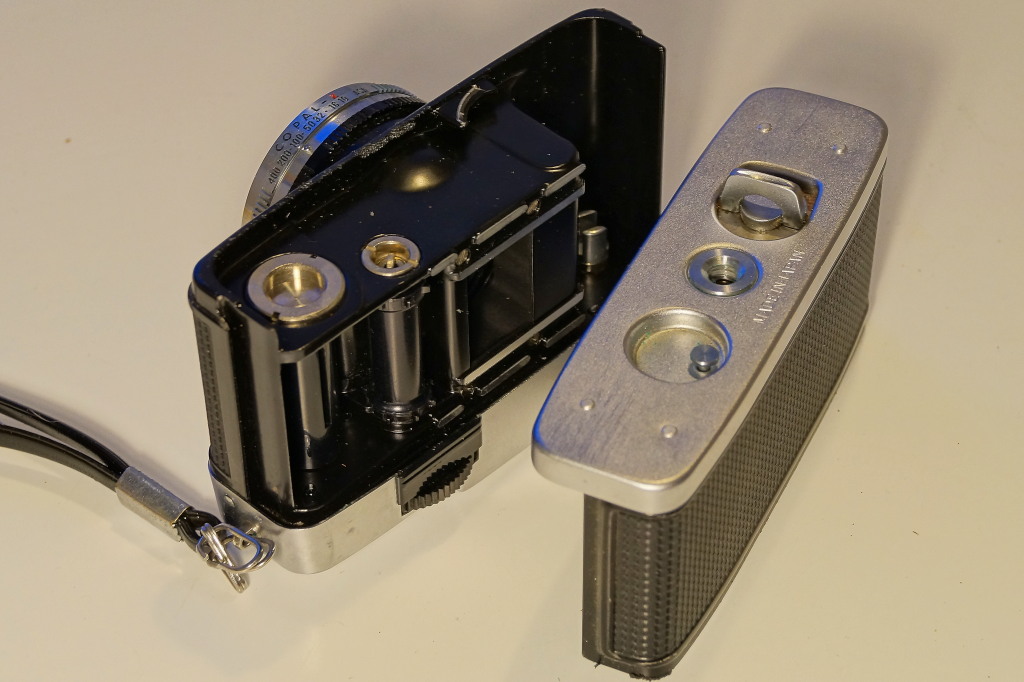 ^^ Olympus Pen D with backside opened. The button is again located in a detention, and right on the spot where the sprocketed axel is inside camera. Just that in this case the bottom of the camera comes off with the backside, not hinged like with that SLR camera in the first photo.

In an SLR body the button stays down until next time you cock the shutter, locking at the last moment of it. Though it is designed so that the film should not move while shutter is being reset, it may sometimes happen that the locking to the sprocket catches on a littlest bit early and the sprocket nudges the film a tiny fraction of a bit forward. That's why I suggest to hold the button down while resetting shutter. But, when doing that, you have to remember the sprocket has not locked and therefore the film will not move when you again cock the shutter after already having done your double-exposure. You need to put the lens cap on and press the shutter release once more, not to accidentally make it a triple-exposure.

In an old Olympus body the button does not lock down. At least not in the Olympus Pen D model, and I suspect this is the case with your Olympus Trip as well. To get a double-exposure you need to keep the rewind release button down while resetting the shutter after the first take of the double-exposure. And here again, the mechanics are so that, after taking the 2nd exposure, you have released the button and turned the shutter reset, the film should move like the release button was never pressed at all. But caution is adviced, for not to ruin your double-exposure. The first exposure after the double-exposure should happen with a lens cap on - just in case. Most likely it will only waste one frame of film, but that is a cheap price to pay for being sure that you have done all you can to make it a success.

Now, success it may not be, even with all that care taken not to let the film move while resetting the shutter. There really is nothing in the camera to actually hold the film in place, nothing preventing it from moving between the two exposures. You can hold the rewind crank in place while resetting shutter for the 2nd exposure, and surely you should do that, but it is still only a roll of film more or less tightly or loosely inside the camera. Some friction comes from the film being pressed between the guide rails and the backplate, and that is where we put our hope that the film doesn't move between shots. At least you can say you have done your best, and the rest is up to Luck.

No need to destroy anything — simply depress the rewind lock pin (usually on the base of the camera, directly beneath the sprocket drive) and, depending on the camera, secure the rewind crank with a finger/thumb, while winding on. The rewind lock will disengage the sprocket drive, allowing the shutter to be reset without advancing the film. The reason you may have to also secure the rewind crank is that on some cameras the take-up spool drive is a belt with slippage that doesn't get disengaged along with the sprocket, and while it doesn't produce enough force to completely advance the film, it can cause misregistration, which will not only screw up the image you're trying to create, but make automated processing (which finds the first frame, then does the eight-hole advance automatically thereafter) impossible.

Not the answer you're looking for? Browse other questions tagged film diy multiple-exposure or ask your own question.

4
Is it possible to do a multiple exposure on an Olympus 35sp?
7
What happens if I press the film rewind button early?

1
How can multiple exposure be achieved with a digital camera?
4
What happens if I take too many shots on a film?
2
Film advance lever does not go all the way and shutter button locked
4
Where can I find B&W film for an Imperial Satellite 127 camera?
5
Multiple exposures on medium format film
2
Why did my whole roll of film shot with my Olympus Infinity Zoom come out blank?
2
What distance should there be between two shots for a stereogram?
7
With which film camera should I start?
2
New roll of film rewound into canister after 4 exposures
2
Why does my multi-exposure film image appear darker than calculated?