How do manufacturers come up with focal lengths for lenses?

There are a lot of lenses for each camera, and I understand that each lens caters to a different use case, but my question is on how they arrive at the specific focal length numbers.

The question holds for zoom lenses also: on what basis do they determine the start and end focal length of such a lens?

First, most "label" focal lengths are approximate, so there may be a 29mm or a 32mm, but it's likely that they will be labelled 28mm and 35mm respectively (or, in this APS-C-is-a-valid-format world, they may both be labelled 30mm). To my knowledge, only a few makers (notably Hasselblad) will state their actual, measured focal length anywhere but on a data sheet hidden in the manual somewhere.

There is a major sequence of lenses that progresses along an approximately square-root-of-two ratio. Not exactly the square root of two, and some of the common focal lengths are inherited from different manufacturer's systems, but close enough for government work, as they say. That includes the 20/21mm, 24mm, 35mm, 50mm, [a gap exists], 100mm, 135mm, 200mm, 300mm, 400mm, 600mm, and 800mm focal lengths. Along that sequence, each lens's field of view varies by about the same proportion from the one preceding and the one following, so if you're stuck with all prime lenses, you can easily determine which one to use when. But there are notable gaps and additions to the sequence. The spot that should be occupied by a 70-ish millimetre lens is occupied by an 85mm in the prime world. That just happens to give a better perspective than anything on the main sequence for people pictures taken with a certain framing, and so it usurped the place of the 70/75mm lens. (The 70mm focal length was resurected for zooms because one doesn't have to forego the 85mm to get it, nor does one have to buy both.) Similarly, the precipitous gap between the "wide normal" 35mm and the undeniably wide-angle 24mm (on a 135-format frame) necessitated an intermediate length, the 28mm.

Macro lenses tended to have a more exact statement of the focal length. The original reason was that so many of the calculations required for magnification and exposure depended on knowing the actual focal length of the lens. (Which is also why there's a film plane indicator on SLRs to this very day.) These days, the stated focal length for a macro lens is a matter of tradition as much as anything else; internal-focus macro lenses will vary their actual focal length, making old-school manual calculations both impossible and irrelevant. Various makers, though, have stuck with their old macro lengths.

Zooms tend to start and stop at familiar focal lengths so that people know more or less what to expect. Crop sensor cameras threw a sort of a monkey wrench (or spanner, if you prefer) into the works, though, at least as far as the old system went. The familiar 18-55mm lens is the near-equivalent (in terms of field of view) of the once-common 28-85mm full-frame zoom, which was itself an upgrade to the older 35-70mm "normal" zoom. (It used to be a fact that a 2:1 zoom would be acceptable, but 3:1 was really pushing it. Optics have come a long way in a short time.) Those crop-sensor equivalents have become familiar signposts as well over the years, so mixes like the 18-105mm or 18-200mm have a meaning to users of crop sensor cameras. But there are oddballs out there as well, like the 17-whatever zoom that can only be intuitively understood as "a little wider than a 28-euivalent but not quite as wide as a 24". With zooms, though, sticking to a sequence isn't nearly as important as it is with primes.

It's tradition. I'm not exactly sure where the tradition comes from, but there is a series of traditional prime lenses for 35mm, and these are still carried on in prime lenses today, and in less likely places: zoom-reflector flashes tend to zoom in a series of big steps matching these focal lengths, and one often finds the same thing with compact camera zooms (lower-end Canon P&S cameras often show this dramatically, with only half a dozen stops, each at roughly one of these marks).

With the exception of 28mm and 85mm, these roughly follow a sequence on the order of the square root of two, which I don't think is for any magical reason except that it's a decent enough spacing and because hey, we're familiar with that math in photography. As Stan notes in a comment, the starting point in this little sequence is almost certainly 50mm, chosen for convenience as a readily-available existing cinematography lens design when the 35mm film format was invented.

I put the focal lengths in the root-2 sequence in bold; I also put 70mm in italics because despite being in the sequence, for some reason it's a more rare duck in actual prime lenses (but it's still common for flash zoom steps).

Note that focal length numbers are often rounded to a "nice" number, except at the wider end where a single mm makes a big difference in angle of view; it's often the case that the lens's actual focal length is different from the nominal one, but we still call it, for example, a 35mm lens.

There are also notable lenses that aren't in the above list.

My dad's old Minolta came with a 55mm "normal" lens, and Pentax makes a 55mm portrait lens today. Or, there is a popular basic lens design for a very low-profile ("pancake") 40mm lens, available in different designs from Pentax, Voigtlander, and Canon today and in older versions from Nikon and Konica and probably others.

Macro lenses are often 60mm or 90mm. (For whatever reason, SLR primes of these lengths are rarely not macro designs; there may be some appeal in making macro lens not exactly coincide with the focal lengths of lenses people already have? That's speculation.)

I have a Helios 44-2, which is 58mm. And also, they round off the numbers. a 17 mm lens may be 17.5 or 16.5, so this is why reviews sometimes compare brands of similar zoom ranges and state that one brand is wider than the other. Choosing a good "Range" or prime focal length is a bit of habit and a bit of knowledge of what makes a comfortable FOV to work with and trade off with zoom range and optical performance. for example Canon 24-70 vs 24-105 L lenses. 24-70 is a comfy range, but 24-105 is a bit more tele, which is even comfier, but it is optically weaker. you also have a cheaper version 28-135mm, which is even weaker optically. This is great working ranges on Full frame. With the introduction of the 1.6 crop sensor digital age, they converted these to 17-50mm / 17-85mm lenses. So there you have those numbers. Similarly for primes you get 50mm standard lenses (much more round number than 45mm. And for crop sensors they had to make 35mm. And they needed some gaps like 50, 85, 100, 135, 200, 300 to make a real difference. The higher you get, the larger the gap should be to see a FOV difference.

The "mm" value of a lens is the measured conical point (in millimeters) from the back plane of the camera where light is focused. This relates into field of view, as the larger the number, the further away the conical point, the narrower the "field of view" that will be captured in the cone. 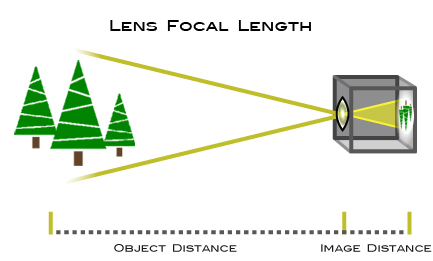 There is no reason why someone can't come out with a 29mm prime (or any other number you can think of) other than cost to manufacture, and market viability.

This is also why a lens designed for an APSC camera is marked 50mm would give the same field of view as a full frame 50mm lens on an ASPC camera. 50mm is 50mm. The ASPC sensor just "crops" out the center portion of the image so the entire cone is not captured, just the inner portion. A larger sensor just captures more of the cone on the back plane.

Not the answer you're looking for? Browse other questions tagged lens focal-length lens-design or ask your own question.

1
What is a 50mm focal length good for on an APS-C camera?
0
Is this attempt to make lens measurements and focal lengths more intuitive correct?
15
How do zoom, magnification, and focal length relate?
4
Seeming contradiction on wikipedia about rear nodal points and how the principal plane is related to focal length