APS-C and smaller sensors seem to have plateaued off in terms of their megapixel counts, possibly due to diffraction limits. The ISO performance of these sensors has not increased substantially in the last 2-3 years. APS-C seems have a usable peak ISO of 3200, and this is lower for smaller sensors. It could be just that my expected technology upgrade speed is unrealistic, but things seem to have slowed down somewhat in the last year or so.

Canon for example has not significantly upgraded their 18 MP APS-C sensor that debuted on the 7D in 2009. Most of their upgrades have been on the supporting CPU (Digic 4\5), ergonomics (swivel screen), mechanics and user experience (touchscreen). Prior to this, they had a 1-2 year upgrade cycle for their sensors. This chart on wikipedia gives a reasonable list of the mainstream DSLRs and their specs.

HTC for example is trying to reverse the megapixels race by going for larger pixels on the HTC One, while Nokia is also sticking to around 8 MP sensors for the time being (PureView 808 aside). Apple (iPhone 4S & 5) and Samsung's (Galaxy S II & III) entries in 2011 & 2012 also had similar 8 MP sensors, whith improvements coming from the remaining hardware and software.

HTC's approach is probably a bit extreme as the 4 MP sensor sacrifices a bit of resolution in well lit scenarios, going by its reviews. 13 MP seems to be the upper limit for camera phones, while 8 MP might be the sweet spot.

Point & Shoot cameras have also peaked around the 16 MP mark, and back illuminated sensors were one of the approaches to improve low light performance.

TL;DR: Are we nearing the point where the sensors have neared their optical limits and most of the improvements in image quality will be from the other components? There are definitely improvements to be made on dynamic range and ISO improvements\low light performance, but are those changes happening at the same rate? Are these low hanging fruits or will they take more time to get addressed?

Update: Found a very useful comparison of the iPhone camera across generations, right from the original iPhone to the iPhone 5.

There is a lot of R&D going on in sensor technology right now, even the examples you give are at best misleading.

So, not only did sensor development not stop, it didn't even slow down. New sensor improvements are released at an amazingly high rate considering the research and manufacturing expenses required.

While megapixels are not changing much, that doesn't mean that sensors are not improving in other ways. For physics reasons (diffraction), at higher megapixel levels, you start gaining less in terms of image quality than you would from other improvements. Additionally, the higher the megapixels get, the less noticeable improvements in resolution are for even rather large prints. (A 24MP camera can comfortably make a 16 by 20 portrait at 300dpi.)

This has lead to a bit of a drop off in the push for higher numbers of pixels and more of a push towards other areas of improvement. Major progress has been made recently in terms of low light sensitivity, noise reduction, faster sampling and better color accuracy. All of these factors have more of an impact on the visual quality of a sensor than simply increasing the pixel count. We also see things like integrating phase detection autofocus in to imaging sensors directly to try to move away from needing a separate dedicated PDAF sensor and mirror.

So in short, no, we are not coming to some peak design limit, just the priorities and areas of advance are shifting. They will likely continue to shift as technology improves further and we look for better ways to capture images.

When developments reach a limit, they move the limit or find another to race to. Digital cameras are fairly new but you may recall this being said about computer components regularly.

Megapixels are obviously very important to marketing, so they keep going. There are ultra-compact point-and-shoot cameras with 20 MP. There were also several models having 14 to 16 MP which were upgraded to one of 10 or 12 MP to deliver better image-quality. Those were high-end compact offerings from Canon and Nikon and sold well since they were aimed at a segment where megapixels are not everything.

In a 2009 interview, Olympus declared 12 MP was enough for their DSLRs even. Clearly the PENs must be running on something else ;)

There is a physical limit at which you cannot make pixels smaller because of diffraction. For this reason we are already seeing diffraction-limited cameras at F/5.6 and many small sensor models no longer have a physical aperture, so they always shoot wide-open. However, wide-open at the end of a 24-1200mm zoom is F/6.9 or something like that! An ND filter slides in to reduce the light reaching the sensor without causing diffraction.

The diffraction limit is relative to the light gathering area, so manufacturers are working on making larger areas. BSI sensors are already mainstream and they also work on better micro-lenses.

There are far more areas for improvement without affecting megapixel counts. In my opinion, dynamic-range is the most important one. Then there are color and light sensitivity. All the major manufacturers have patents in the area which are yet to be used. Fuji seems to have taken a bolder approach than the others but expect to see advancements from all makers.

If anyone knew the answer to that, they would be applying for the patents. Perhaps they are, we're just not aware of it. There are several different issues involved in the different parts of your question.

¹ The 70D and 7D Mark II came and went with only very minor sensor based improvements. Not until the 80D was introduced in 2016 did Canon finally introduce an APS-C sensor with significant improvements over the 18MP APS-C sensor introduced with the original 7D in 2009.

This is the sort of answer that the downvoters love. Fortunately, having smoothly increasing "rep" is not a vastly meaningful thing, so, lay on ... :-)

At the risk of hubris and suffering tower of Babel-itis, it's reasonably reasonable to conclude that it will always be possible to make things better and cheaper simultaneously. The main question is usually, how long will it take to discover how to do so.

Q:
How will these changes be achieved?
What form will they take?
What existing 'relevant and limiting "laws of Physics" will they side-step (never "break") to do so?

A:
I don't know.
And nobody else does with any certainty for more than a year or two into the future.
The "next great thing" is already patented, tested, & evaluated and is currently being optimised by the engineers. I don't know what it is.

There are invariably hard spots along the way as eg some law of Physics interposes what is deemed to be a natural hard limit. In some cases the hard-limit may be hard enough that it takes centuries to find the "real rule of Physics" that the old one was an approximation to. Chances are the laws that govern diffraction limiting are going to be safe for centuries and just possibly millenia.
Chances are, in the year 2525, if man is still alive , diffraction limiting in small sensor cameras and similar will not be a meaningful concept.

Mere physical limitations tend to get side-stepped. Very few people these days worry at all about the achievable grain size of silver base images, or the flammability and longevity of nitro-cellulose.
Or whether 2.62 megapixel is really enough for 'good' wedding photos 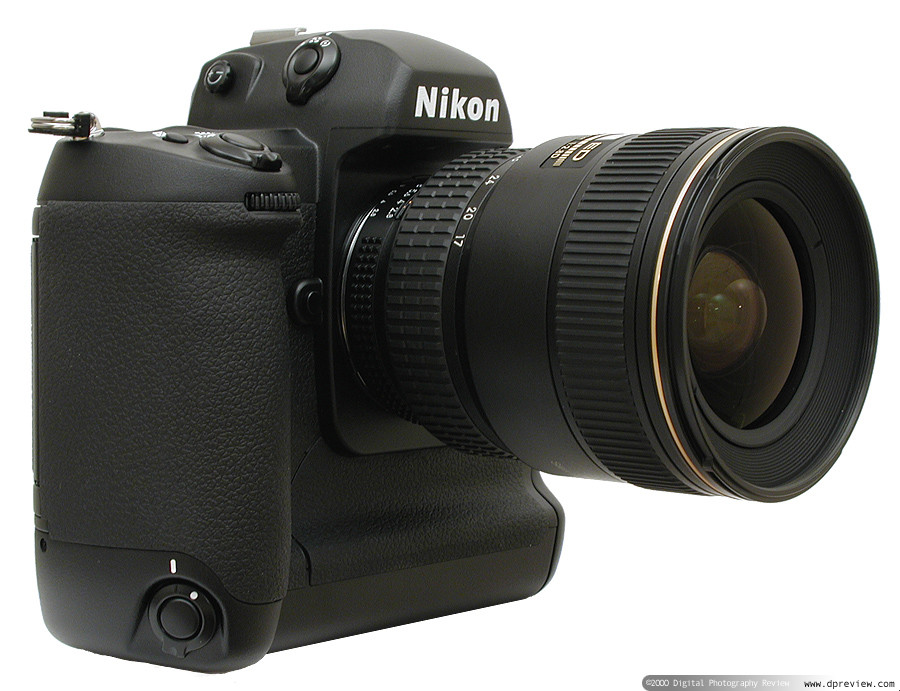 Sensor research is still going strong, and it's exceedingly unlikely that the sensors we buy today are the best that can ever be.

It's entirely possible that the megapixel race will slow down for a while; the smallest sensors (cellphone size) are already at the diffraction limit.
Larger sensors, DX and FX, could double or quadruple their megapixel counts before the diffraction limit becomes a problem, but the actual benefits of increasing the sensor resolution further appear to be limited by the lenses.

But there are plenty of other ways to improve image quality, from iterative improvements in reducing noise and increasing quantum efficiency (the percentage of light hitting the sensor that is converted into electricity so it can be recorded) to entirely new sensor designs.

Two examples of different sensor designs, one already on the market and one in the early research stage:

Time will show how it turns out. But I have no doubt that sensors will continue to improve, although improvements may not take the form of more megapixels.

So cellphone sensors are already butting up against the diffraction limit.

(The Nokia 808 Pureview stuffed 41 Mpx into a cellphone, but it was a much larger sensor - 1/1.2", 5-6x larger than the iPhone/Samsung sensor and not much smaller than the 1" of the Nikon 1 system - and a f/2.4 lens, so it was close to the diffraction limit but didn't exceed it.)

These are also near the diffraction limit for their respective lenses. But this is arguably just as much a question of lens availability. For instance, if Nikon replaced their f/3.5-5.6 zooms with f/2.8 versions, a Nikon 1 sized sensor could make use of 53 Mpx before hitting the f/2.8 diffraction limit.

These have plenty of headroom before they hit their diffraction limits. Even at a relatively modest f/5.6 we could double or triple the megapixel counts we have today.

So we may have to wait for improvements in optics before we gain much from adding more megapixels, and it may make sense for sensor makers to focus their efforts elsewhere.

34
What do Pentax and Sigma DSLRs offer that differs from Canon and Nikon?

19
Are digital sensors sensitive to UV?
4
Which digital cameras are using which sensors?
2
Have DSLR sensors made improvements since the transition to CMOS?
4
Why don't sensors have a wider aspect ratio?
2
CCD sensors use a digital shutter. Why don't the more expensive CMOS sensors?
10
What camera companies make their own sensors?
3
How close are digital sensors to "night vision" image intensifiers?