How was this image where a person appears to lift a paved road created?

Since the development of advanced photo editing programs like Adobe Photoshop, artists use unusual techniques supported by creative imagination to produce unrealistic but conceptional images. Among many, Erik Johnasson has created eye-catching photos.

I know that the production of such creative images are based on mix of different views and manipulation by programs like photoshop, but in some cases, they need unusual techniques to fully match the interface of changing subject. For example, in this photo: 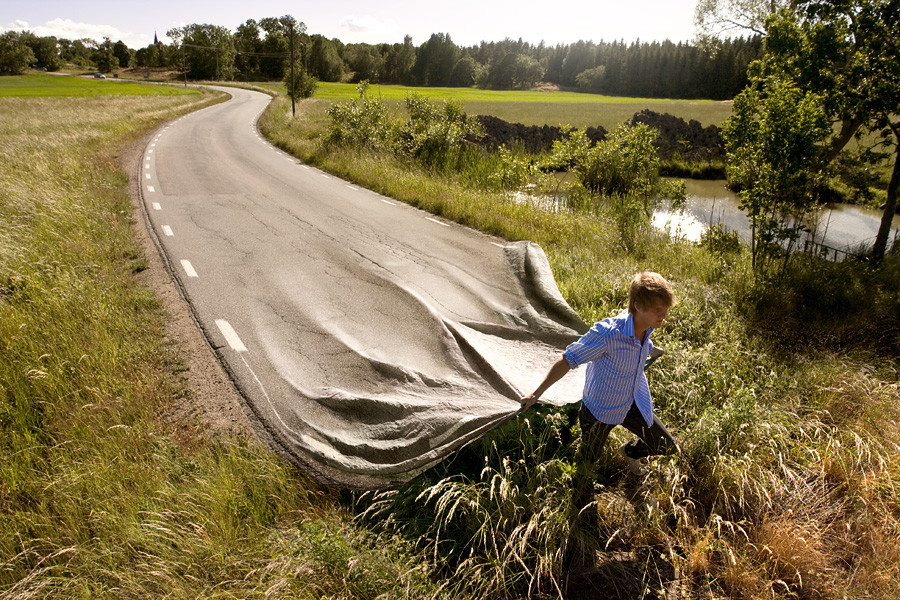 We have an ordinary landscape of a road, which is mixed with a person carrying a curtain.

Is there tutorials or books describing exactly these techniques? Most of photo editing tutorials focus on what people are interested, improving real photos.

It's a blend of two pictures: one showing a road, and another showing a guy dragging a tarp of approximately the same color and width as the road.

In particular, note that the grass around the guy looks subtly different from that around the road. It is pretty carefully done, though: it's pretty hard to see where the transitions are. (Well, except for the obvious one between the road and the tarp, that is.)

I think the approximate blend line probably goes something like this: 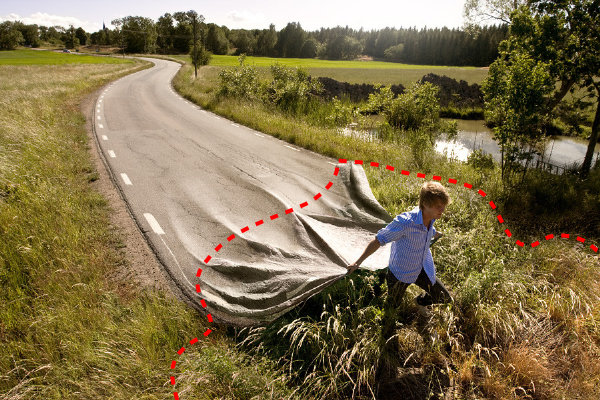 Obviously, the road/tarp blend line follows the creases of the tarp; I didn't even try to follow those with the dashed line. Also, extra creases have been drawn on the road surface to continue those on the tarp, but it's pretty easy to see where the real creases end and the fake ones start. I'm not 100% sure about the bottom left end of the line: the grass there has obviously been edited to hide the original edge of the road, but it's hard to say which image some parts of it come from.

As for how to do this kind of image mixing, it's pretty similar to, say, manual panorama stitching, which I've done a bit of. The basic process goes something like this:

You cant tell exactly from a low res, but I think Ilmari Karonen has got it close.

My guess is that only 2 pics are used. Nicely done with matching lighting - probably shot at the same time in close vicinity of each other.

How to uniformly continue the background under the road? Masking. Place the pic over the other one (layered in Photoshop) then use masking to selectively brush away the top layer. It seems that they also extended the folds by burning and dodging on the road, creating the appearance of folds by giving it a bright and dark side. They probably also matched the color of the curtain to the road.

I do think the guy is actually holding the curtain.

It might have even been done as a single photo. If they went to a spot where the road actually ended, they could have put a drape down and then only had to alter the edges and texture of the drape some to complete the look. It would cover what would otherwise be the end of the road.

Not the answer you're looking for? Browse other questions tagged image-manipulation or ask your own question.

0
Distinguish between original and photo-shop

14
How do I get this 'glare' effect?
6
How do I effectively split an outdoor image across an uneven horizon in Gimp?
0
How can I do this with my image?
9
How to recreate this effect, a mix of profile and front headshot?
2
How can I do automatic background subtraction with a reference image in Photoshop?
0
How to create this early sun look?
4
How can I interpolate each color individually (i.e. export an image just with Red Color) using dcraw?