How to create a photo mosaic?

Hi i am new to photography, i have a pic of my friend's which i would like to make it special. I would like to combine his 20 to 30 pics to form his face or any other nice pic of his. What software can i use to do this?

The technique is called a photomosiac, where an image in composed of lots of smaller images with different overall colour / brightness such that it resembles the master image when viewed from a distance.

There exist many pieces of software to sort the images and build the mosaic for you. That's not the hard part.

The problem is that if you have, say 20 images, you're only going to be able to represent the face as a 4x5 grid of pixels (unless the software is able to exploit the shapes with an image, and you get extremely lucky with your source images).

This is what a 4 pixel by 5 pixel image looks like:

Could be a pork chop.

If you quadruple the number of images then you get something like this:

Which is at least recognisable as a human face.

But to stand a chance of being able to recognise the image, you need something more like 20x25:

But that's a very famous face, personally I would recommend going a little bit higher, 32x40:

And then everybody knows who the portrait is of. 32x40 requires 1280 images. But that's if there just so happens to be the exact number of each colour/brightness required in the collection. In reality this wont happen so you need to multiply by a factor of 4, or more, meaning realistically you should be looking at 4,000 images. So I think you're going to struggle with 20.

Since you have asked for a software to make a photo mosaic, let me suggest the one I have used: TurboMosaic

It's pretty simple and most people should be able to use it straightaway. Btw, you'd need more than 20-30 photos to get a good output.

Here's a sample photo mosaic I made using TurboMosaic: 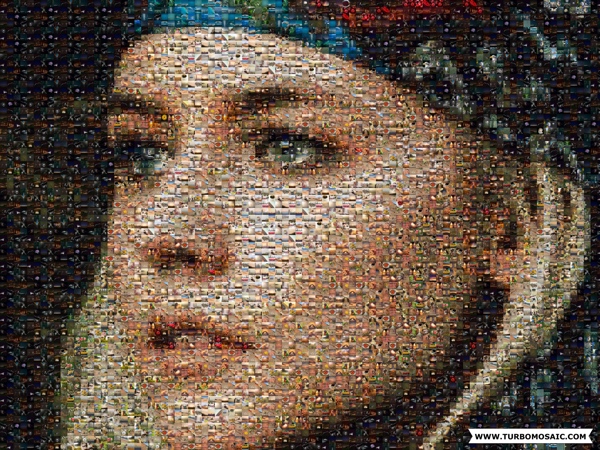 (disclosure: I work for the company that makes TurboMosaic)

Not the answer you're looking for? Browse other questions tagged photoshop photo-editing or ask your own question.

9
How to choose a good external monitor for photo editing
7
Can I remove the cable in postprocessing for this photo?
5
Recommendations for Photo Editing/Organization Software?
0
Software/sollution for blending/morphing faces together
0
Combining "long-exposure" photo stack with HDR in Photoshop and Google Nik Collection
2
How do I edit non-RAW files from a wedding?
2
Does a green screen have to be green and, if so, what shade?
3
How to create a more natural look using Strobe lights for watch photography?
2
How do I create an infinite picture-in-picture effect?