Whats the approximate aperture of a pinhole camera?

There are plenty of different pinholes you can make! Assuming I am being a little bit less creative and I am making a matchbox pinhole camera lens using a drawing pin in a sheet small sheet from an aluminium can, how can I calculate the aperture and what is it likely to be?

If the diameter of the shaft of a standard pin is about 0.5 mm, then the aperture of that is based on the focal length and that should be the distance between the sensor and the lens mount (flange focal distance). So, given that, the math is: FFD/2 assuming a 0.5 mm pinhole. So, on a Canon EF mount with a 44mm flange focal distance, the aperture is f/88.

You can image a red laser across the room shining on your pinhole, and measure the diameter (in pixels) of your first dark ring (if your pinhole is a clean circle). Then knowing pinhole-to-detector distance and the formula for the angular diameter of that first dark ring (about 2.44 * wavelength / pinhole_diameter, in radians) figure out your pinhole diameter. You'll need to look up the pixel size for your detector to do this. The red laser is likely a HeNe laser, around 0.632 microns wavelength.

I have DIY a pinhole lens. I used an aluminum foil. I used a needle to make a very tiny hole on it. I took several pictures by it. I used the photo editing software to check the photos and adjusted the exposure time accordingly. Until I got a good picture (i.e. not too bright and not too dark), I found the aperture of the hole made by a needle is about f/95 to f/120.

See here for my work - http://daddiest.com/pinhole-photography-dirt-cheap-pinhole-lens-diy/ 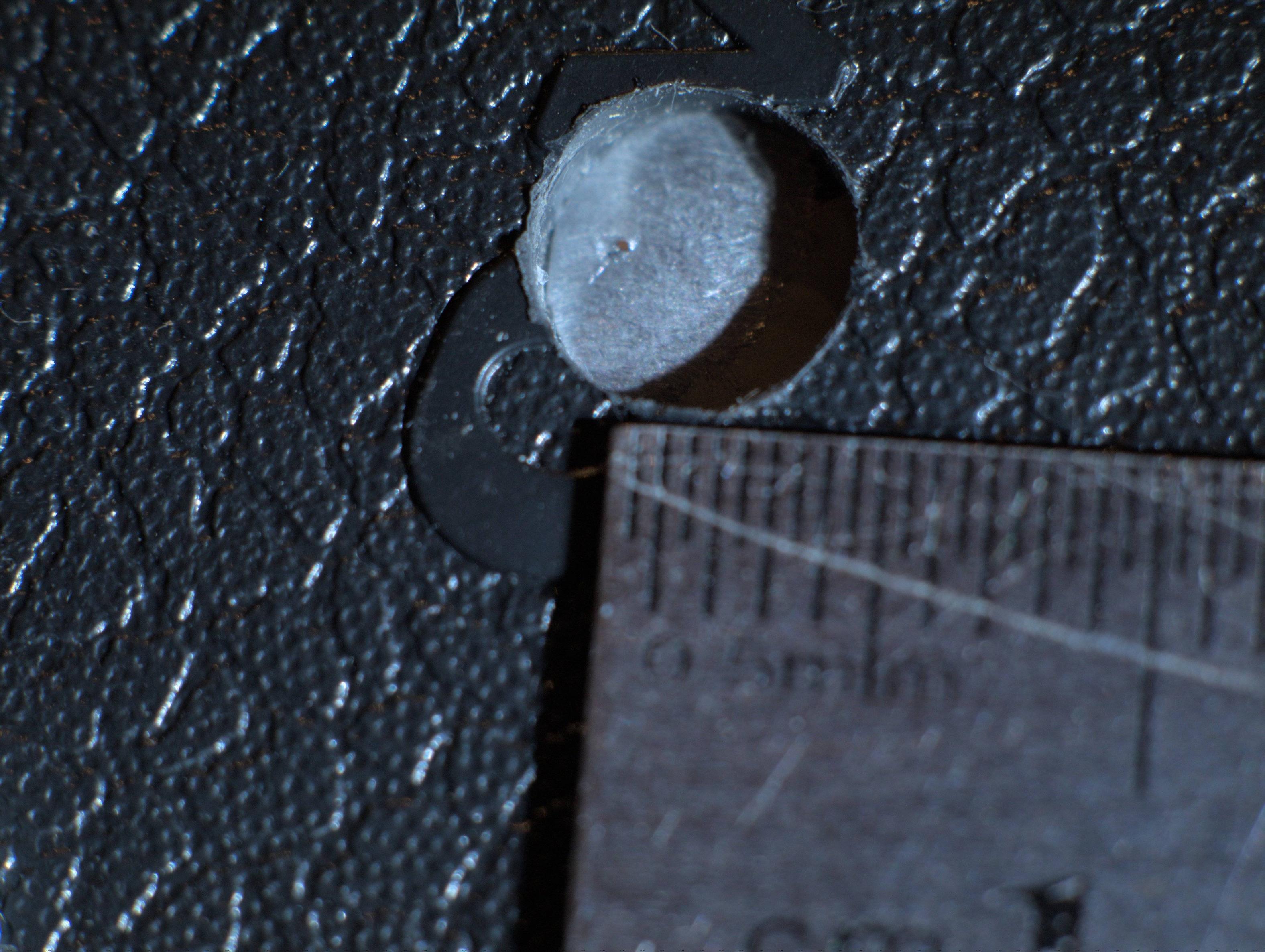 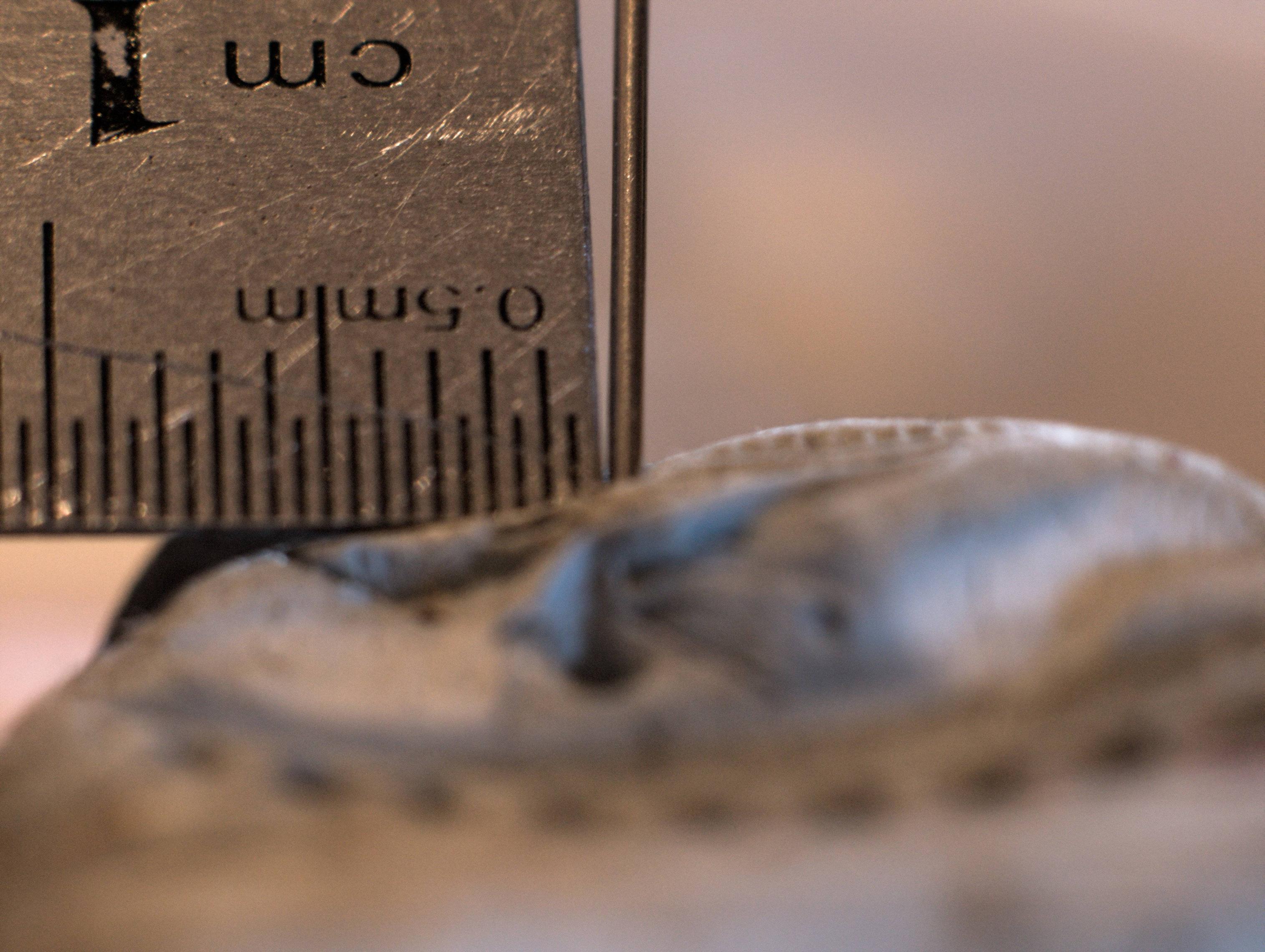 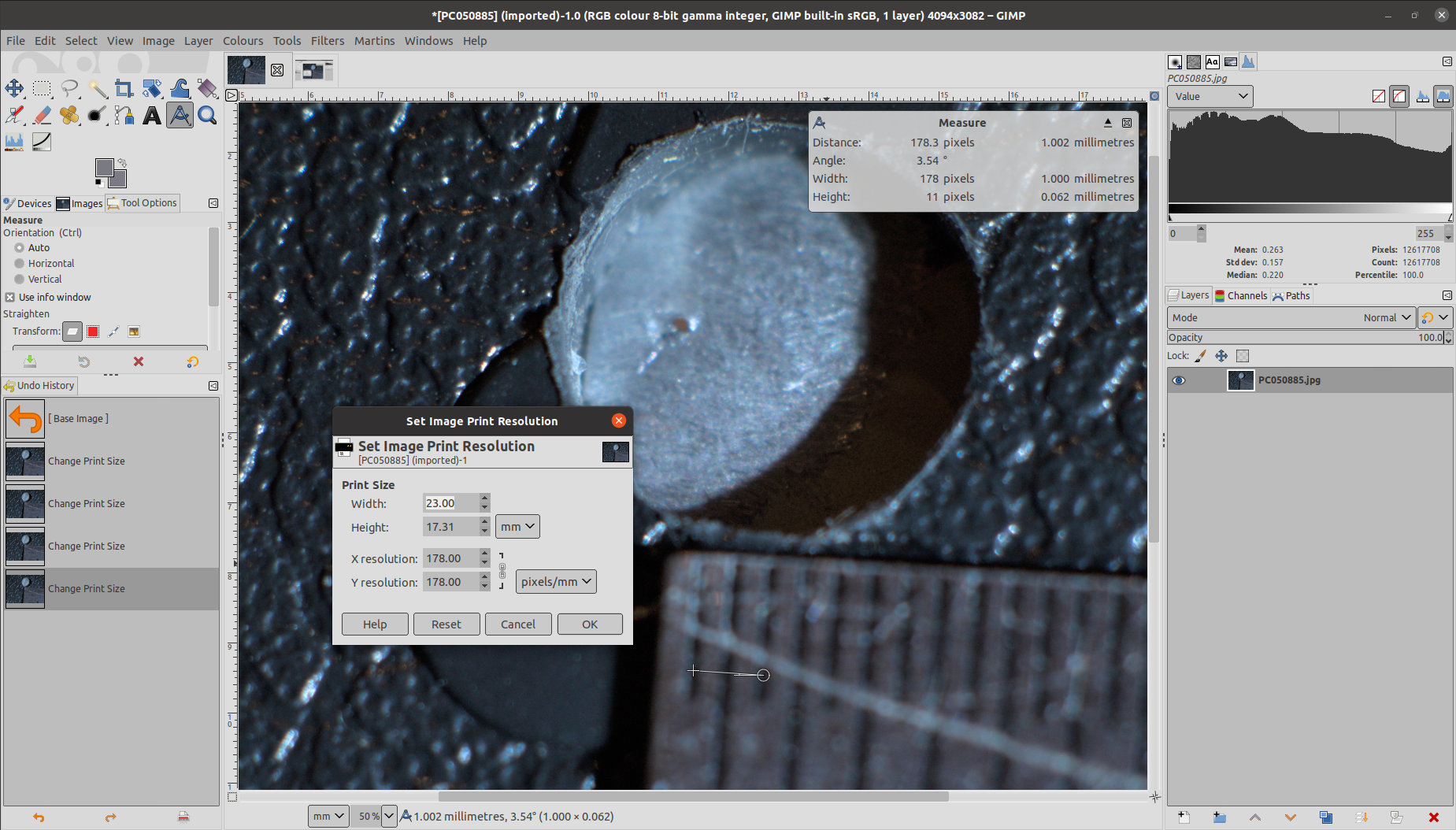 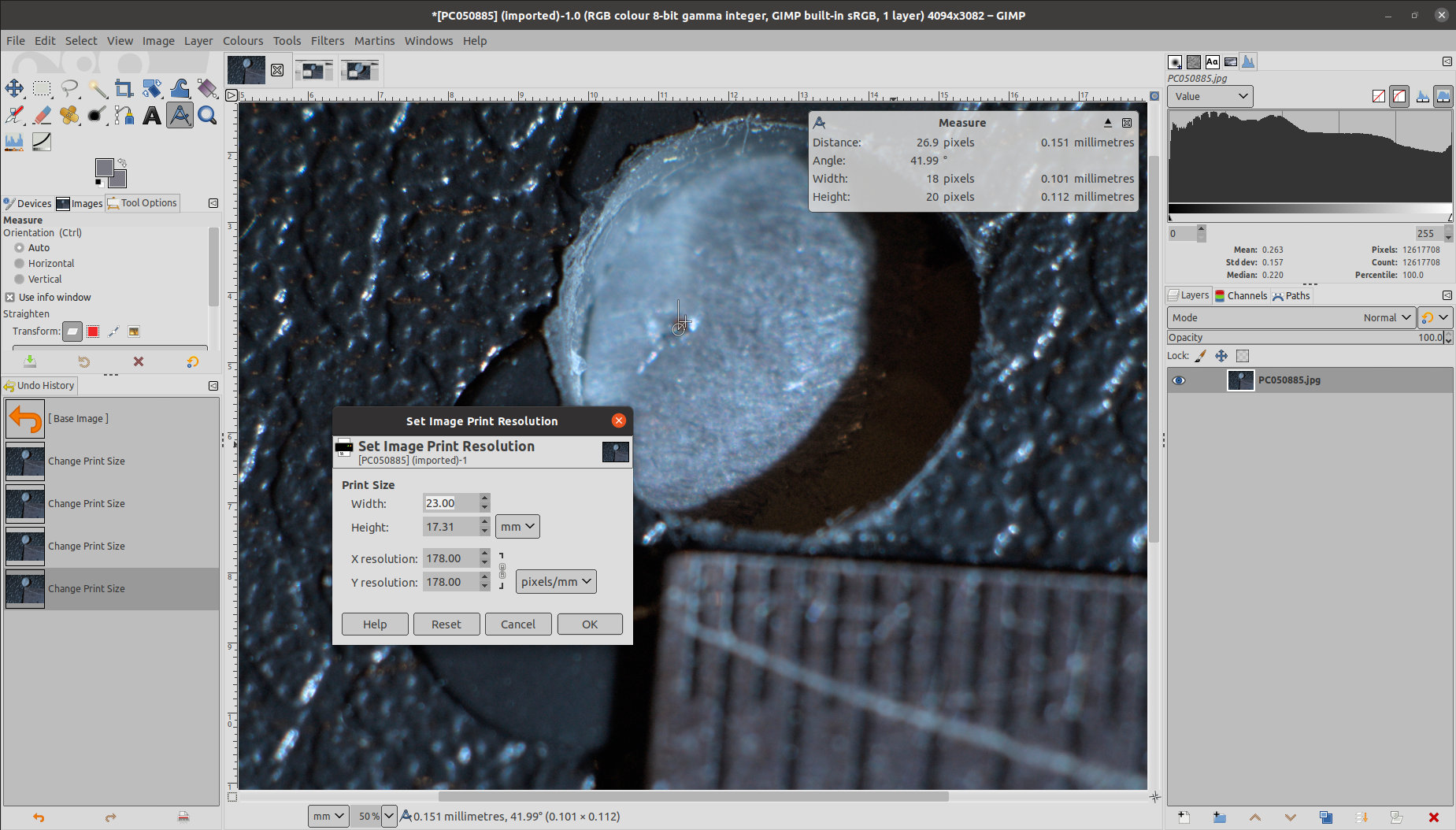 Take the photo then import it into GIMP. Ensure the units are set to mm, activate the measuring tool and calibrate it by measuring the ruler (in this case marked in 0.5mm increments). Open the Image / Print Size dialogue and enter the measures number of pixels on the image into the pixels/millimetre box. Measure the hole. In my case it was around 0.15mm. The macro image also shows how rough and irregular the hole is.
Putting the numbers into the equation:

A method to check this is to use a manual flash / speed-light. 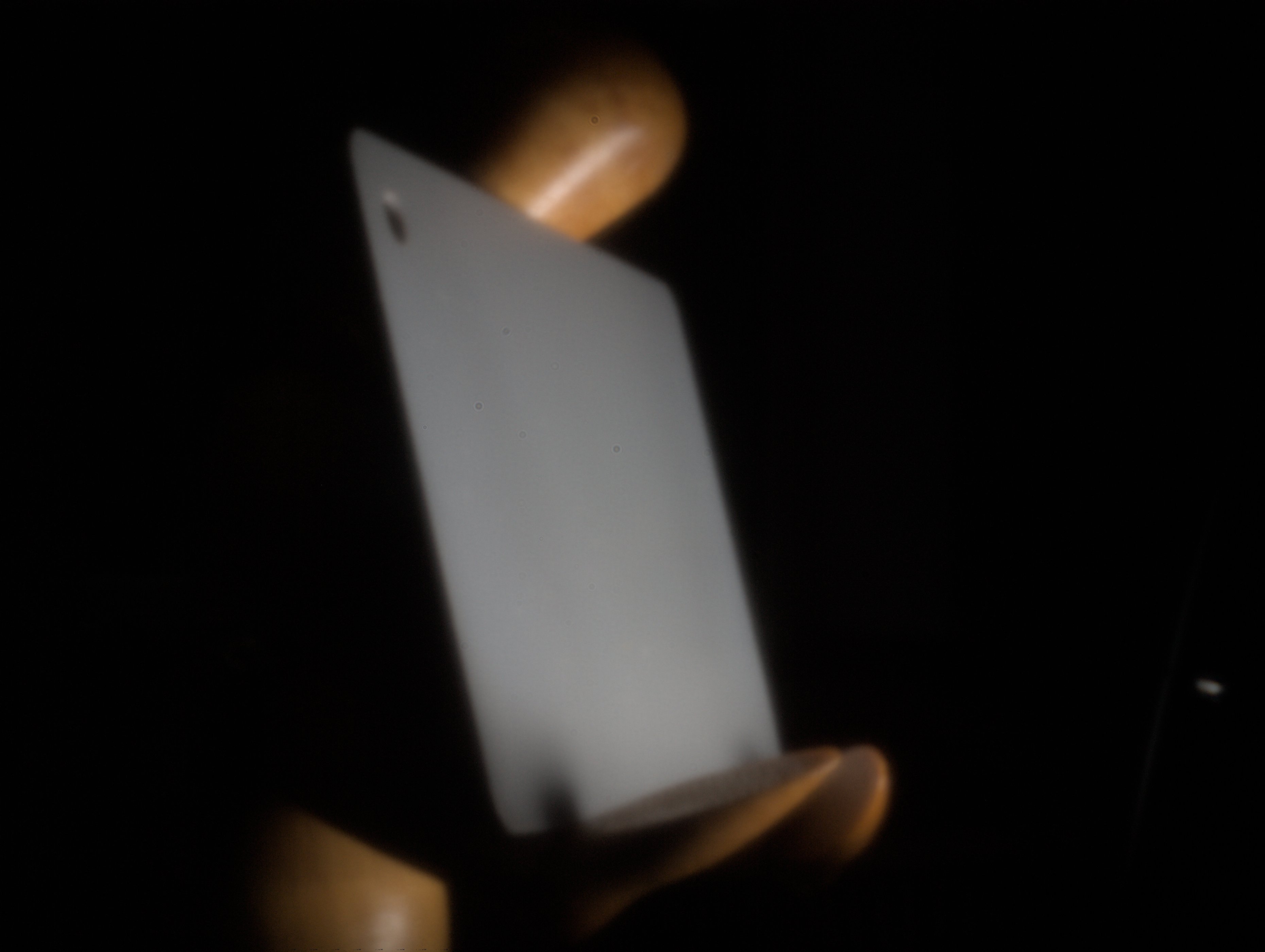 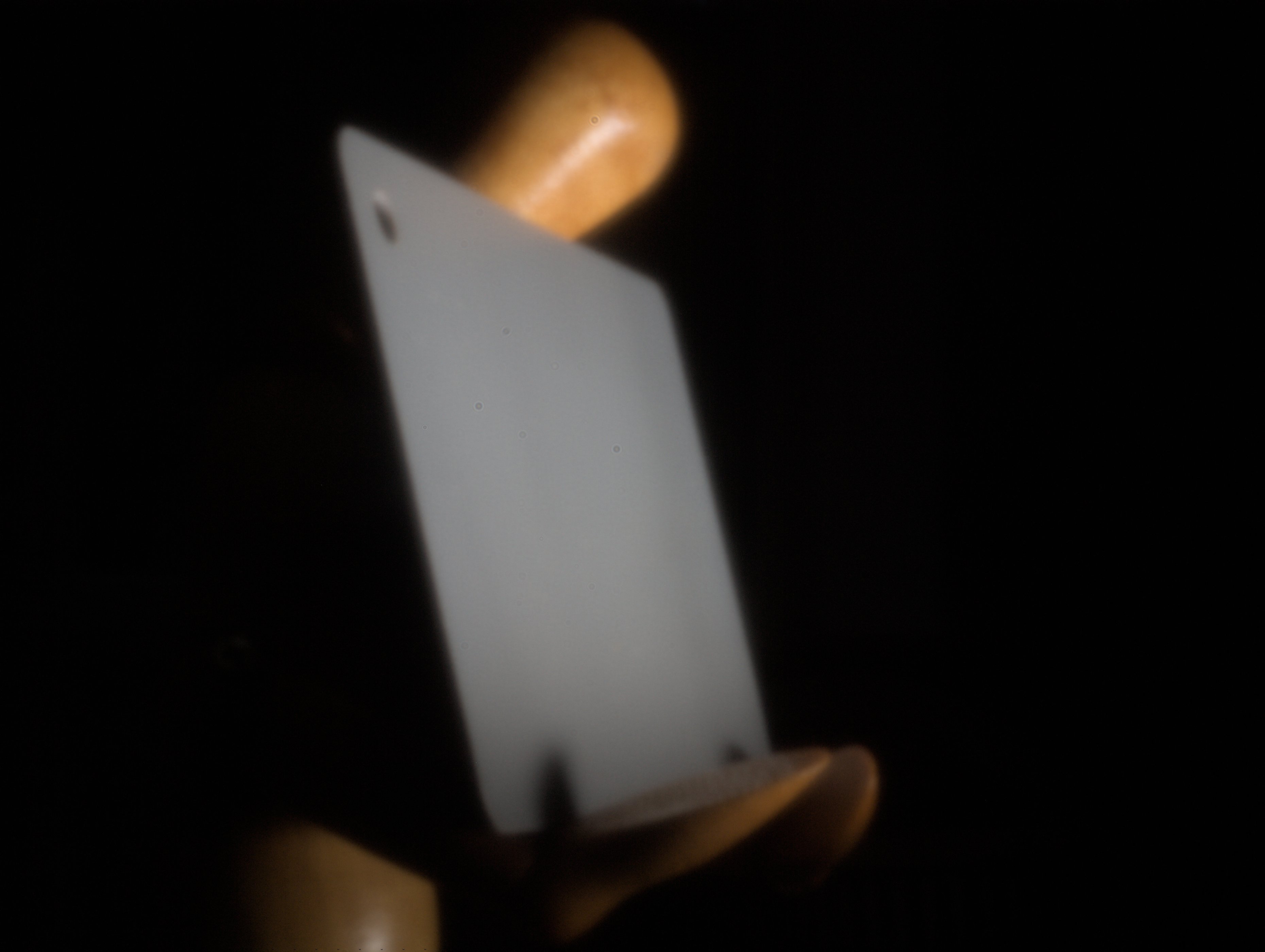 Using the equation Guide Number = flash distance x f number along with the f number calculated previously and the power table supplied for the flash, take an image and check the histogram on the camera. If you fill the image with a grey card you should get an obvious peak in the mid-tones near the centre of the image. I found that the image was too dark and increased the flash exposure by 1/2 a stop to get G.N. 21mm, distance 5cm, coverage 50mm, power 1/4. Returning that to the equation for flash calculations:

Returning that to the pinhole equation:

Not the answer you're looking for? Browse other questions tagged aperture pinhole-cameras or ask your own question.

10
Can a dSLR be safely made into a pinhole camera?
5
DIY pinhole lens' aperture is ƒ00, which can't be changed and pictures turn out mostly black
17
How do I find the aperture that produces the highest-quality images for a given lens?
16
Why isn't my variable-aperture photo more interesting?
6
What's the difference between vignetting and pinhole?
0
Are there super-macro lenses for getting "inside"?
3
How does a modern DSLR camera and lens actually adjust its aperture
1
Will my camera autofocus over the full range of a telephoto lens with variable aperture?
1
Choosing an aperture for long-distance landscape photography