How do I get proper exposure when photographing white subjects?

When spot metering white subjects (e.g. snow, white birds), do I adjust the EV on my camera + or - to get a proper exposure? I'm getting conflicting info.

If you are spot metering the brightest points, you are telling the camera to put that in the medium exposure, and everything else will end up below it, except for brighter highlights, so will want to EC it up, so you are telling it that this is the bright area of the scene.

It is when you have snow all over and meter on a darker subject, you might want to do -2 EC to get the shades in the snow, or all the snow will be clipped.

When spot metering on a white area you should set your EC to approx +2 (or, in manual mode, get the meter to show about +2)

This is obvious when you think about it in manual mode - white is brighter than 18% so the meter should show the scene it too bright.

Or, another way to think about it, without EC snow will be medium gray, you want to tell the camera to make the picture brighter to get the snow back to white.

I blogged about this same time ago here

An example shot where zero exposure compensation worked out best. 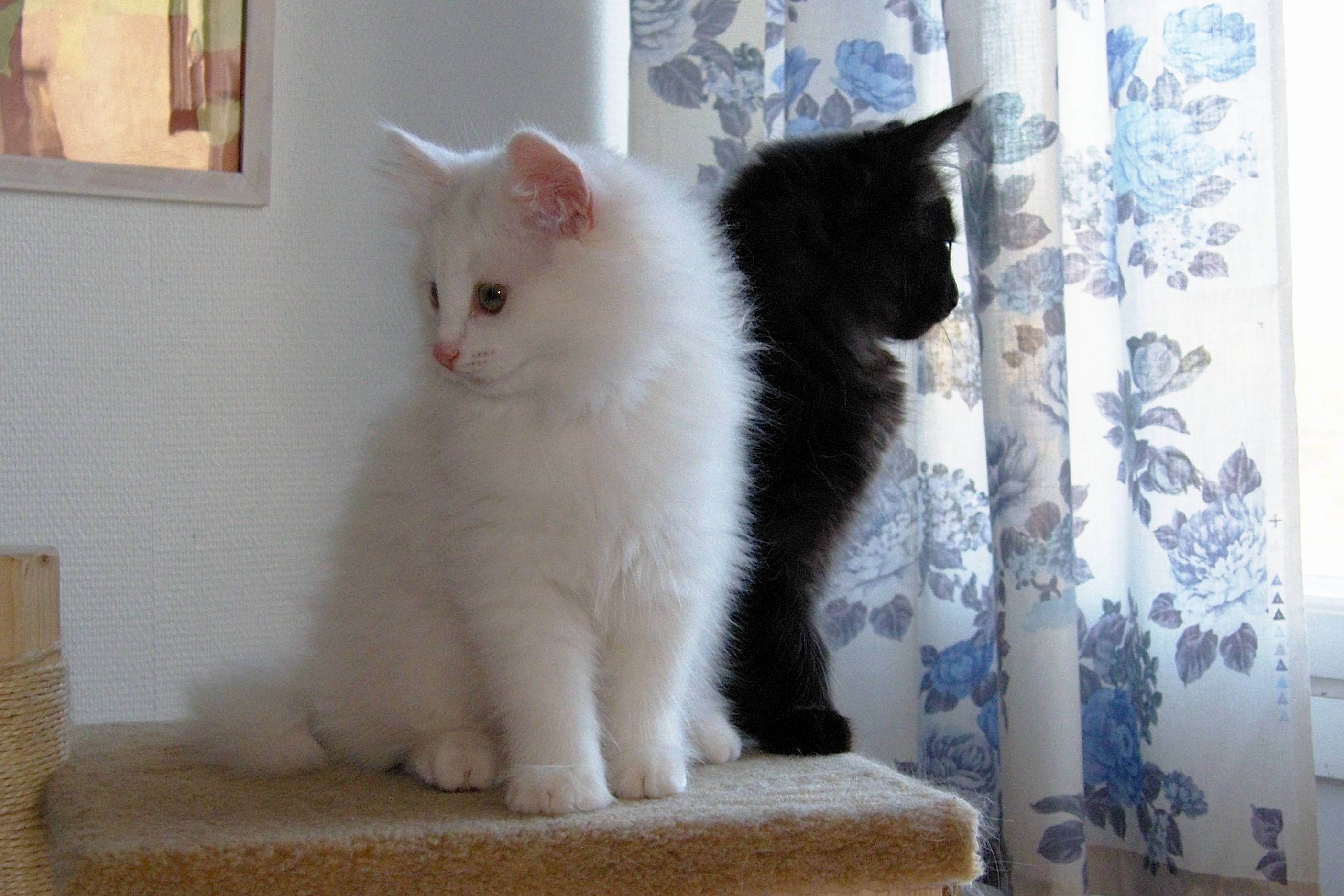 My learning experience from taking this shot tells me I should have flooded the cats with light, and not even try it in the dim like I did. The problem is the black cat, really. Exposure to the white one would render the black cat just plain black without any texture.

So when you hear conflicting info about exposure compensation for white subjects, it may be related to each photographer having different experience in this matter. Generally I agree with Nir, but I would not blindly set +2 exp.correction and then wonder what else is wrong with the setup.

As the other answers say, it depends on what you're metering. What you want is for the white areas to look white: not so bright that they clip, but not so dark that they look gray either.

Thus, if you're spot metering on the white object itself, you should adjust the exposure up to make it look white, not medium gray. However, if you're metering on a dark object on a white background, you want to adjust the exposure down to keep the white background from burning out. And if you're using a large enough spot size to catch both white and dark areas in the measurement, you may even find that ±0 EC works best.

In practice, especially when shooting fast-moving targets on a bright white background (like, say, kids playing in snow), my experience has been relying on the camera's automatic metering is a total crap shoot: you can't predict how much of the metering area will be snow, and thus you can't tell in advance how to compensate for it.

So my advice, in that situation, is to shoot in full manual mode and just take a few test shots to get the exposure right. (The histogram is helpful here: typically, you'll have two peaks, an upper one for snow and a lower one for everything else. Make sure the upper peak is close to the top of the range, but leave some margin above it so that it won't clip.) Obviously, that's harder if you're shooting on film than with digital; in that case, you'll just have to learn to estimate the correct exposure in advance.

Also note that, especially with digital cameras, it's a lot easier to brighten underexposed pictures than to try to fix blown highlights. So, if in doubt, err on the low side.

If shooting in Manual, I'll use the spot metering mode to meter a bright part of the scene, and check it's more than +1 (or 2 as other have said), then i'll meter on the darkest part and ensure that's negative enough.

Then I have a rough idea that it's all covered-for and take the photo.

Otherwise, if you're out in the day light and it's really bright it will be difficult to tell whether something is bright/dark enough by viewing the LCD screen. In this scenario, I have three choices:
1. Sunny 16 rule.
2. Give up and let evaluative metering take care of it.
3. Assume you'll post process and take a photo right before clipping. Ie, take photos until you have the highlight warning going off, then take it a notch darker.
4. Meter the bright and dark areas with spot to figure out your + and -'s, then check with the histogram that it looks reasonably correct to the distribution of brightness in the scene.

In the snow, I use #3 and postprocess. Snow is difficult, esp cos you've got goggles on, high reflection, etc. Only the blinking highlight alert and histogram is really useful.

Not the answer you're looking for? Browse other questions tagged exposure exposure-compensation or ask your own question.

13
What exposure mode and techniques should I use when out-and-about?
35
How do I use spot metering?
7
How do I know I have the correct exposure when shooting in manual mode?
14
How should I learn to understand Canon's metering?
4
How to set exposure for photographing a high-contrast subject?
3
What could cause severe under-exposure when using a Canon 5D Mark III with Speedlite 600EX-RT with Evaluative E-TTL2 metering?
1
How can I get the exposure correct in this picture?
2
Tips for proper exposure using center-weighted metering
6
How to get exposure right in night photography?
1
Does in-camera metering affect anything but the meter in manual mode?