How to correct exposure locally with Apple Aperture?

I have a question about using Aperture on OS X.

I have taken a RAW picture (made with a K-5) of an arcade machine. While most of its surrounding is fairly well exposed, the lit areas are overexposed (i.e. the monitor and the top where its name is displayed in bright lights).

I have trouble fixing the image so that the overexposed area is better visible.

When I reduce the exposure of the entire image in Aperture down to -2, I can see that there's still enough detail in the RAW img to make this look good.

However, Aperture does not offer a brush for the Exposure setting. Having searched the 'net, I found lots of suggestions to use "Levels" or "Curves" instead for brushing these areas. But when I try these options, I find that I do not get the same good result as I get when reducing the overall exposure.

Here's how it looks with default exposure: 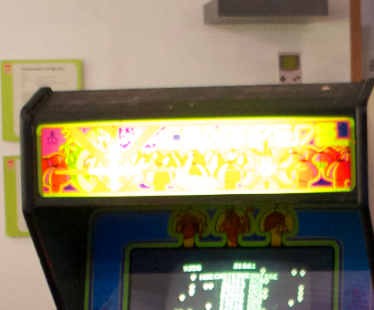 And how the lit areas should look (with Exposure set to -2): 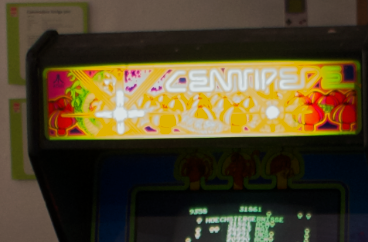 But when I try the Curves brush, the best I can achieve (by using the Extended Range and moving the white point to the right) like this, which isn't satisfying:

Can someone suggest how I solve this? Other than using a image editing program to cut and paste parts of the corrected (Exposure -2) image into the "normal" image?

If Aperture is just not capable of it, could Lightroom do this?

BTW, if you like to try for yourself (and help me immensely with it), here's the original RAW file in PEF format: Arcade.PEF, 24 MB. Note - downloading may add an incorrect .tiff extension - remove it so that it's named "Arcade.PEF" before you open it.

I tried to see if I could find a way to get Aperture to desired the required result on the image you supplied, but I could not. I though that it should be possible by a curve adjustment, but lovering the curve also made the color in the photo much less vibrant. Maybe this could be countered with other adjustments, but then it is definately not a simple way.

I'm not sure why you awarded that answer. It's absolutely fixable easily with aperture. I've spent less than 5 minutes on this and already got decent result.

This is your exposure -2EV:

This is what I got to (different from above but it's even better imo):

All I did was brush in levels set to: 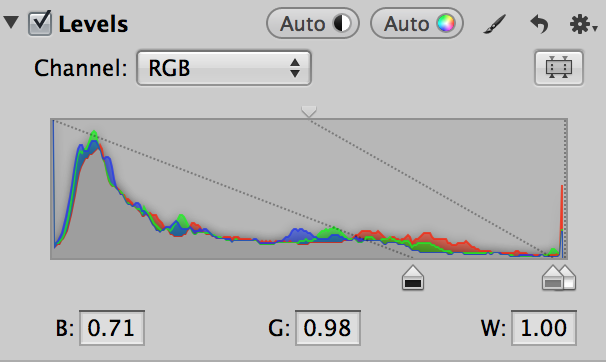 Followed by setting recovery to 0.14 (because some area was blown out).

Aperture can do most of what you need, you just have to learn how to use it.

There are two approaches that work for this image:

Also you may want to add a second Shadows adjustment filling in shadows to about 50 or so, with mid-contrast of 12... brush that away from the sign with a strength of 1 or it could impact the results.

Rather than looking for an "exposure" brush, you should be looking at the burn (darken) and dodge (lighten) brushes. What you want for this image is the burn brush, which darkens a particular area under the brush.

You'll want to consider whether to turn on the "Detect Edges" option, which will constrain the effect whenever it finds an obvious edge/boundary between two areas of brightness or contrast.

Start with a copy of the image version in Aperture, so you can play without worrying. Also start with the brush on a relatively low strength. Brush over the bright area until you've reduced the glare.

You could also experiment with the Highlight slider, reducing the brightness of the highlight areas.

Not the answer you're looking for? Browse other questions tagged apple-aperture exposure-correction or ask your own question.