When shooting landscapes in Western India, I often have a serious problem with haze. The air can often be dusty outside cities and polluted inside. Shooting in the golden hour doesn't always help either, since the haze can be pervasive. See below for an example of what I mean.

Since this seems to be an unavoidable fact of living where I do, I've been wondering if it is possible to artistically incorporate the haze into the image.

Are there any technical or compositional techniques that can help do this? I could obviously get a CPL to help with the haze, but assume that this isn't an option in this case.

PS: I'm aware that the composition on this image isn't exactly stellar, it is intended as an example of the haze problems that I face. 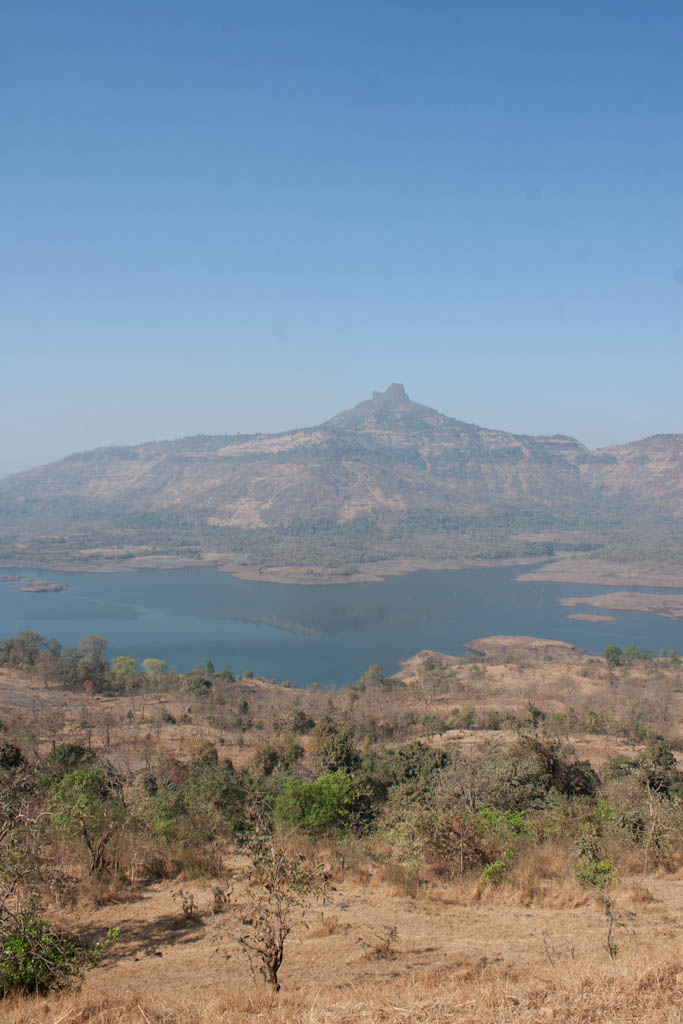 Because the effect of the haze gets stronger as objects get more distant, it really adds depth to an image, as long as you have nearby objects which are less affected, midrange objects and distant objects. The further objects will get more and more faded.

This can work to your advantage if you can find situations where there are a series of mountains further and further away, you can get very nice images where the closer mountains are less hazy and the rest slowly fade out. Like this shot, taken before sunrise: 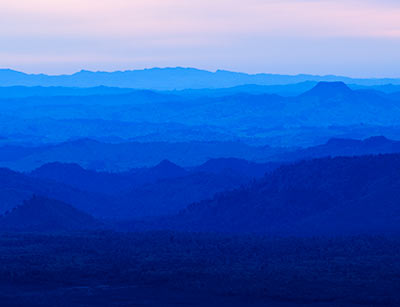 Or if all of the background is the same distance, and will be equally hazy, you need to find something else for foreground interest. Could simply be a tree or rock. Anything that isn't "hazy" to instruct the eye that the image isn't simply washed out, but that the background must be very distant due to its being so faded compared to your foreground.

Because haze reduces contrast, in post processing, you ought to be able to fix the images to a degree by bring down the blacks and boosting overall contrast (using curves) or midtone contrast (using clarity slider or equivalent in whatever editing program you use).

As well as lowering contrast, the haze desaturates the colours, so you may want to boost saturation or vibrance.

Here is a quick edit - in RAW converter

Then in Photoshop added a warming filter to the land areas, and various curves layers to the sky, water and mountains. 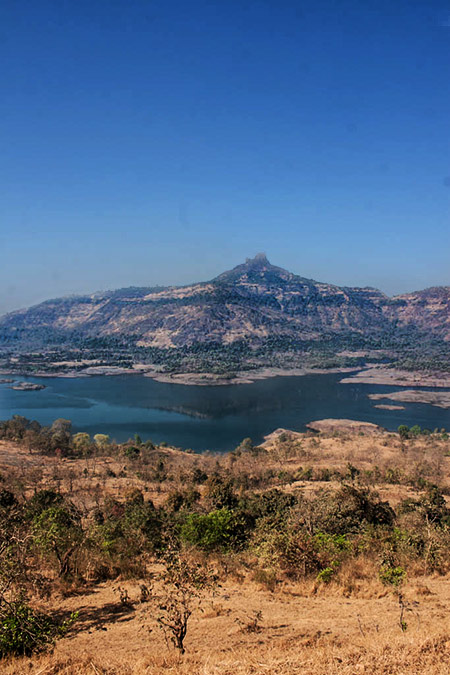 Here are some possible ideas.

You could experiment with tilt shift effects (using lenses or post production) or simply use a small DoF centered around a foreground subject.

While either of these would certainly make all your background fuzzy and indistinct, the results may show some compositional aspect of the background (the mountains line for example) that a casual observer wouldn't normally notice.

De-haze the image from India -sample for "the blue haze problem". The blue-haze is the nightmare of the any landscaper-documentarists. Bl.-haze means: low-contrast and blue color dominante. Just oppside-compensate this, attack the blue-haze by forcing sliders of contrast and the warm colors. 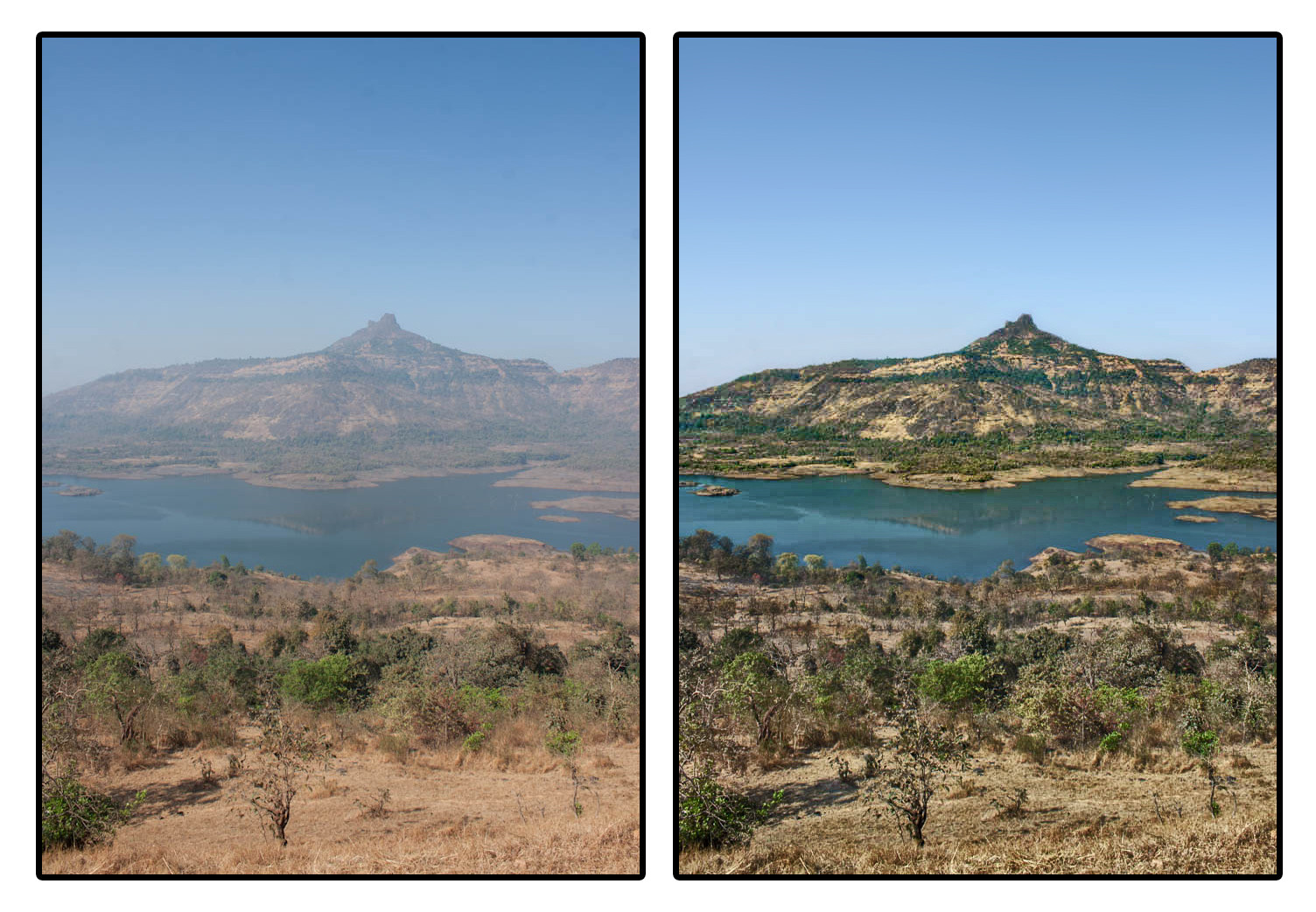 Not the answer you're looking for? Browse other questions tagged technique composition landscape haze or ask your own question.

24
How can I take pictures of far-away mountains to the South?
14
Compensating for poor air quality?

17
How to maximise contrast range of distant landscapes with blue haze?
14
Does an ultra-wide lens perform well in landscape photography?
15
How to postprocess photos with lots of blue haze?
4
Is it possible to add haze to a portrait shot?
4
Is there a way to predict haze for a given region/day?
4
Buying a lens with light haze?
0
Remove haze from photos
5
How to add a haze/dim to the photo in lightroom