What are battery replacement options for the Olympus OM-1?

A friend of mine gave me a beautiful OM-1 with some lenses. The only caveat is that I don't have any batteries for it. The camera takes mercury batteries. I was wondering if there are any options to replacing it or modifying it so I can take advantage of the built-in light meter.

There are some warnings about using different types of non-mercury replacement batteries. In this flickr thread, there are a few suggestions:

I just dug out my old OM-1 recently and had the same problem. Here's the cheapest solution. I had some AG13 batteries I bought for VERY cheap a couple of years ago; 100 of them for not much, and I kept them in the fridge. Two days ago I put one of them in the OM-1 and folded a small bit of aluminum foil and stuffed it in on top of the battery and screwed on the cap. The meter worked!

Using the same settings and target, my Olympus OM-D E-M5 told me f 4.5. So about 1/2 f-stop difference. Not too shabby for 40 years' difference.

The AG13 is a very common item. Google "AG13 equivalent" and you'll find Energizer 357 and Duracell A76 and many more. Just drop in the battery flat side up, and fold a small piece of foil to take up the gap between the battery and the screw-cap, tight and flat enough that it can't shift and short out.

Then get a bulk order of AG13's like I did for MUCH cheaper. Maybe a few go bad and turn green around the edges after a year or two in the fridge. So what? Toss the ones that look bad, and get a decent battery tester that tests button batteries, and pack a few extras on a trip.

Surely you have a cheap or better modern digital camera you can use for similar tests? Try a bunch of the cheap batteries against tests on the same target with the digital, and look at the EXIF data compared to what works in the OM-1 without using film. Basically, the cheapo digital is working as an external light meter. Do that till you get confidence in your batteries before you use them on relatively expensive film, with it's attendant developing and printing costs. And may the Farce Bewitch you, aka good luck. 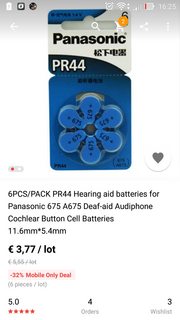 Out of all the answers I've seen on the internet I am boggled why no one has recommended a hand-held light meter. I've been using manual cameras for so long I seldom use my in-camera meter anyway. The only time I reach for my handheld meter is at night for long exposures. For creative night scenes you have to figure out the exposure yourself and bracket around that. Let's say you were at the beach at night and there was a couple on the beach embracing, the sun has gone down but the background was a beautiful orange yellowish color, so you decide to shoot the couple in silhouette, the camera is designed to give a correct exposure - the rest is for you to figure out. Bottom line, stop worrying about batteries or modification. Just go out and invest in a handheld meter, heck even the pros use them.

Not the answer you're looking for? Browse other questions tagged film battery olympus old-cameras olympus-om1 or ask your own question.

10
Am I wrong to judge my exposure using my smartphone?

4
Is there a radio flash control system for Olympus that allows setting flash power from the camera?
6
Are there any ways to combat "sluggish battery syndrome"?
1
Is there a special term for cameras that use standard, replaceable batteries?
0
Why does my camera turn off after taking 2 to 3 shots?
1
Does the K1000 need a battery to trigger the flash?
0
Canon T5i (lp-e8) high capacity battery grip/battery bank?
1
Nikon F3 vs Contax T2 for a beginner film user?
6
Olympus OM-10 35mm - Film not gone all the way back into the cartridge
0
How do I check the battery status with a Fujifilm S9900?
0
Why doesn't my 1150 mAh charger successfully charge a 1500 mAh battery?