Does this mean that we can take HD pictures with a 2 MP camera? If not, why not?

If the resolution long axis is at least 1920 and the short edge at least 1080 then yes, you can take HD images without having to upscale.

However, due to benefits of oversampling, you will make a better HD image by grabbing a 16MP image and then resize with the best available resize method, e.g. lanczos interpolation if available.

Another problem you may encounter is that a 2MP camera have not been designed with high quality imaging in mind (*unless you are talking something like a Canon EOS D2000 from 1998 which has the wrong aspect ratio , anyway), so they saved costs on not only the sensor but the rest of the imaging system as well - low end optics, ADC, processing, etc. yielding a lower total system resolution and IQ.

No, because of the Bayer filter. You would actually need around 11 megapixels.

What a Bayer filter is

Colour camera sensors use Bayer filters to capture the various colours. The Bayer filter effectively halves the resolution of the sensor for each colour (though green is left with slightly more in a checker-board pattern).

Each pixel on the sensor can only capture either red, green or blue light, but not all three colours. A software algorithm needs to interpolate the data later to re-construct the full resolution photograph in full colour. 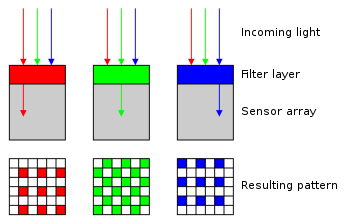 This interpolation process (called demosaicing) will visually restore a lot of the effective lost resolution, making it look pretty sharp again, but it can only do so by taking fairly intelligent guesses. It's not the same as if you had been able to capture the image at full resolution in the first place.

For example, while demosaicing is fairly good at claiming back lost sharpness from the Bayer filter, any fine detail such as hair, comb-like patterns or fine stripes are likely to suffer from aliasing, which can show up as colourful interference patterns: 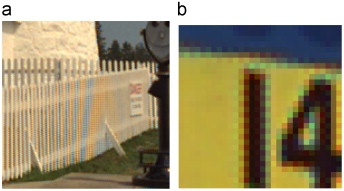 (These images show very poor demosaicing algorithms for the sake of illustration. Modern cameras - even cellphones - use much smarter ones.)

Modern demosaicing algorithms are pretty smart and can minimise the effect of aliasing, but it still cannot retain the fine detail. A distant picket fence shot on a 1920x1080 colour sensor will retain less effective resolution than an RGB 1920x1080 image that is computer-generated or scaled down from a larger sensor or scanned on a scanner.

How this affects the resolution

(and how I came up with the "11 megapixels" figure)

The effective resolution of the resulting image after demosaicing doesn't look like it is half the resolution claimed by the sensor, because of the gains made by smart demosaicing routines, and the fact that the green channel, which correlates well with luminance, has more resolution than the other colours.

But it still would need to be shrunk by 50% to remove any loss due to interpolation. If you really wanted to ensure that your picture was "full resolution", without any loss of detail due to interpolation, you would need to have a colour sensor with double the resolution you want, in both the horizontal and vertical direction, and then resample the resulting image to 50%.

In order to capture full effective resolution of 1920x1080, a colour camera sensor (with a Bayer filter, which includes 99% of colour camera sensors) would need to have a resolution of double that: 3840x2160. That's over 8.2 megapixels. Due to cropping on the sensor (again due to the camera's demosaicing method) you'd effectively need around 8.8 megapixels to be sure.

While 99% of colour camera sensors use Bayer filters, there are some that use an alternative pixel layout, but the principle is the same.

There are also some colour sensors that don't need a colour filter at all, such as the Fovean X3 sensor, but these are still exceptionally rare and have their own issues. Manufacturers also tend to lie about their pixel count (in order to be competitive with sensors using a Bayer filter, where the pixel count always sounds a lot more impressive than it really is due to the above described filter).

Another alternative that is employed by some expensive professional video cameras is to have three entirely separate sensors, one for each of red, green and blue, and use a light splitter to throw the same image on all three of them. Obviously this cannot exist in a DSLR or compact camera or any normal type of consumer stills camera. But it can explain why pixel counts on the sensors of professional video cameras can't be compared to those on DSLRs.

(For technical minds only)

Even though video (and sometimes JPEG) uses chroma sub-sampling, it still needs the luminance channel to retain full resolution. In an image from a Bayer sensor, the luminance channel still needs to be calculated using a process of interpolation, even though with a good demosaicing algorithm, it can appear to approach full resolution due to the high correlation between luminance and the green channel in most content.

You are right that a 1080p HD image has just under 2 megapixels.

Now where you have to be careful is in considering the aspect ratio of your camera. If it shoots natively 16:9 images and it has 2 MP, then you would have enough resolution. If the camera has a 4:3 sensor which is the most common for small cameras, a 2 MP camera would most likely capture a 1680x1260 image. This unfortunately does not give you enough horizontal resolution.

it depends on what usage are you planning. if you want to project your video on a large screen (e.g. projector), then use a higher video mode of at least 1080p which of course requires a higher resolution (means more mega pixels) for smooth projection of the image. Take note also of when using a higher resolution mean a more space consumption on a memory card and would require a higher specs of your PC for the video editing. But if you're planning for a small screen projection, (Laptop, PC) a 720p would do.

Special Note on Scanning Type Progressive - is a way of displaying, storing, or transmitting moving images in which all the lines of each frame are drawn in sequence. The main advantage with progressive scan is that motion appears smoother and more realistic.

Interlaced - commonly used in analog aged of tv and crt, is a technique of doubling the perceived frame rate introduced with the signal without consuming extra bandwidth. The main problem of it is the interline twitter. For instance, a person on television wearing a shirt with fine dark and light stripes may appear on a video monitor as if the stripes on the shirt are "twittering". This aliasing effect shows up when the subject contains vertical detail that approaches the horizontal resolution of the video format.

Not the answer you're looking for? Browse other questions tagged terminology resolution megapixels or ask your own question.

9
How many pixels in a megapixel?

9
Is more megapixels better in macro photography?
17
How does taking lower-resolution pictures with a higher-resolution sensor affect image quality?
3
Does increased resolution compensate for diffraction?
4
How does sensor size relate to image resolution?
12
How can a camera be both 12MP and 1080p, when 1920x1080 is just 2,073,600?
1
Which is correct, "resolution is megapixels" or "resolution has megapixels"?
0
Why does a more expensive camera have fewer pixels?