Do all telephoto zoom lenses backfocus on the wide angle end?

I’ve just gone through a round of testing with two telephoto zooms, on two different cameras, and both appear to have significant back focus issues at the 70mm end.

I even borrowed a Nikon D600 to compare against my D7000 and both seem to exhibit this back focusing.

Has anyone else noticed this behavior, or am I just imagining (reading too much into) this, or doing something wrong?

Test target images follow with one thing to note, during these test shots, I had the Nikon D7000 AF fine tune set to -5 which is why one of the shots at 200mm is actually slightly front focused. 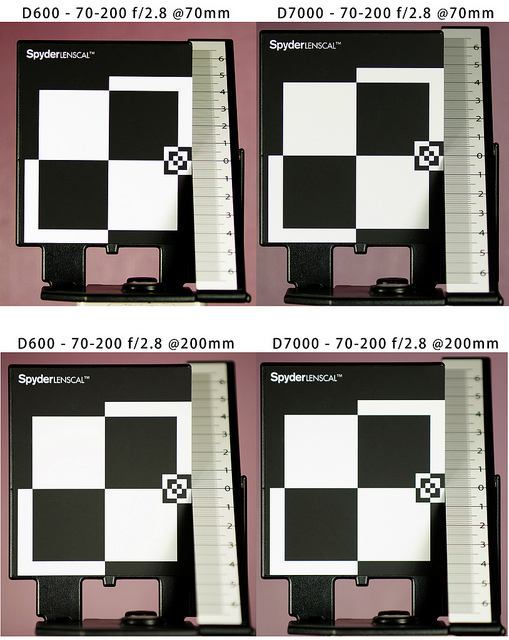 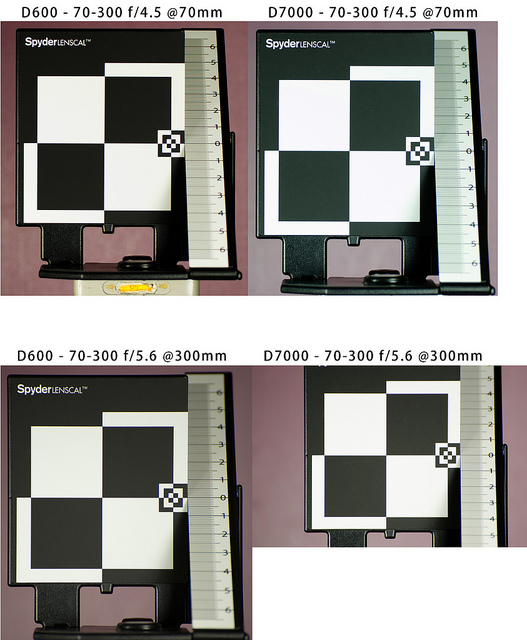 It is not necessarily true that all tele zooms back focus on the wide end. What is almost universal is that no zoom will be exactly calibrated at both the short and long end at the same adjustment setting.

Both Canon and Nikon recommend calibrating zoom lenses at the focal length you use the most. If the camera doesn't allow separate entries for the W and T end of zoom lenses, I tend to find the best setting on both ends of the lens and then split the difference. If my lens is +5 @ 70mm and +2 @ 200mm I'll set it at +3 or +4. There are some bodies, such as the Canon 1D X, that will allow you to calibrate the longest and shortest focal lengths of the same lens independently.

There are several issues that can affect the results of AF calibration tests:

The critical thing to remember when using tools such as the Lenscal or LensAlign is that the plane of the target and the focal plane of the camera must be parallel. Even a few millimeters variation can affect the results significantly. The LensAlign's designs assists in this better than the Lenscal. I'm more of a fan of flat target methods that allow you to optically align your camera with a mirror and then tape the target to the mirror. There is even FoCal software that will automate much of the calibration process.

Another thing that can sometime affect results of AF calibration is that phase detection AF is designed to favor speed at the expense of accuracy. Most AF systems are an open loop: the camera measures how far and in what direction the lens is out-of-focus, instructs the lens to move by that amount, and takes the picture without verifying how far the lens actually moved. Newer lenses have sensors that report back to the camera the position of the lens, but for any improvement in AF performance both the lens and the body need to incorporate the newer "closed loop" improvements. Roger Cicala, the CEO at LensRentals.com and technical guru, says the newer systems have about half the standard deviation in terms of focus variation from shot to shot compared to the "open loop" systems. But even then there is still deviation from one exposure to the next, just not as much. When using tools such as the Lenscal, a series of 3 or more measurements should be made at each setting.

Using the correct temperature light is also important. AF systems are centered around 5200°K. Using tungsten or especially fluorescent lights to illuminate your target can skew results. Of course, if you always shoot in a stadium under 4200°K lights, then maybe you should calibrate with the same type of lights.

One thing I've noticed when calibrating longer lenses is that the correct setting at 20 or 30 feet is not always the dead on setting when shooting at 100-200 feet. Of course the problem with calibrating at those distances is that a target such as the Spyder Lenscal becomes smaller than the coverage of your AF points and you can never be sure exactly what the camera is trying to focus on (Don't assume areas outside that little square are not covered by the actual focus point - they are).

A word about viewfinders and focus points: I'm not near as familiar with current Nikon cameras, but here's a map of the Canon 5DII's focus system. Other camera systems are similar. What is actually visible in the viewfinder are the eight small squares in the middle of each blue bar (but not the bars) and the slightly larger square at the center point, yet the actual coverage for each point are the areas covered by the blue rectangles and there is nothing in the viewfinder to indicate the position or coverage of the six red AF Assist Points that are active by default when the center point is selected and the camera is using AI Servo. So when you think only that little square in the very middle is all that is being looked at by the AF sensor, it is actually the entire area covered by the long vertical bar, the shorter horizontal blue bar and the red rectangles. The AF Assist Points can be disabled via the custom menu.

For further reading on AF systems, Roger Cicala's Autofocus Reality series is very insightful. Part 1, Part 2, Part 3A, Part 3B, and Part 4. And: How Auto Focus (Often) Works Also: Are zooms always sharper at one end than the other?

Not the answer you're looking for? Browse other questions tagged focus zoom telephoto back-focus or ask your own question.

3
How to get more pin sharp shots with a lens known for inaccurate autofocus?
0
Is it normal to see focus inconsistency frame-to-frame with an f/1.4 lens?