Can great photographs be taken with not-so-good equipment?

Many photographers will tell you that the equipment doesn't really matter and that while it may be more challenging to get the shot you want with a P&S or a crappy lens, it is still possible.

On the other hand, whenever I've gotten my hands on a Canon 70-200 f/4 or a 400 f/5.6, the jump in the quality of my photos was stunning, practically every exposure was damn-near perfect once I got used to the lenses.

This leads me to my question. What are some examples of great (read pro-level or shots that could be sold) shots taken with consumer-level, cheap equipment? Do such shots even exist?

Examples of the equipment I'm thinking of would be things like P&S and smartphone cameras as well as DSLRs with cheap glass attached to them.

Most importantly, if such photographs do exist, how does one go about learning to take them?

If you really need an example, I guess the current "canonical" one would be Jerry Ghionis's iPhone wedding album, which placed fourth overall in the 2012 WPPI album of the year competition. For those wondering, Ghionis photographed the wedding with his normal gear, but took extra "takes" with the iPhone (and permission of the couple) specifically for the project. And the point was not to prove that "equipment doesn't matter", but that composition, framing and the effective use of light matter much more.

If you need more, you need look no further than, say, every picture taken before World War 2. Even the "legendary" lenses of the time were absolute crap compared to the "eww, it's plastic" consumer-grade lenses of today that gearheads wouldn't use at gunpoint. Films were soft and mushy with grain the size of watermelons, and anything bigger than a contact print would show it. Shutter speeds were ballpark at best (clockwork timers in fine working order could be off by half a stop in either direction, depending on heat, humidity, age, and so on), and you didn't have much of a calibrated range to work with. A top speed of 1/1000 put you in the super-fast league (1/400 or even 1/250 was the top speed on most shutters), and longer than one second usually meant using bulb and counting. Speaking of which, the longer your exposure needed to be, the longer your exposure needed to be (reciprocity failure), so if you calculated a four-second exposure, that might mean anywhere from 8 to 30 seconds, depending on the film and the weather. It would have been highly unlikely that the photographer was using an SLR; so viewfinder parallax, framing accuracy and distortion needed to be taken into account for anything other than view cameras. A $99 point-and-shoot today beats a pre-WWII medium or small format camera in almost every technical respect. And yet people managed to take some really good pictures somehow.

Better equipment will make good photos better. It can make some kinds of shots possible that would not have been possible otherwise. It will not make a bad photographer good (although it might provide enough of a psychological lift to encourage the photographer to get good). If the best you can do with an older or cheaper camera is "meh", then stepping up to a $50,000+ Hasselblad or Phase One system will only get you "meh" that looks slightly better at 100% on a monitor. As Ansel Adams said,

There is nothing worse than a sharp image of a fuzzy concept.

For a given photographer, such as yourself, moving up from a crappy camera/lens to a good one is certainly going to give you better sharpness, dynamic range, colour. But your skills (as Caleb points out) are a constant. So sure, you'll get better image quality, possibly very noticeable improvement. Same photographer, better equipment, probably slight better image.

Put that crappy camera in my hands, and in the hands of a genius like Henri Cartier-Bresson, and he will produce amazing images while I will quite possible not! Same equipment, better photographer with a better eye, much much MUCH better result.

A lot of photography is about image quality and being able to capture a moment - might require high resolution, a very fast shutter speed, long reach telephoto, high dynamic range scene, where better equipment will do more. But most often it's about composition, light, being in the right place at the right time and capturing a moment like Cartier-Bresson was so wonderful at. Photojournalists and street photographers for example can get by with "lesser" equipment than a high fashion, wedding or elite sports photographer could (although all of those have been shot successfully, if only as experiments, with camera phones).

You are confusing two completely separate things here. A great shot does not need to be of a high quality and a high quality shot is not necessarily great.

While you can get a great shot with pretty much anything, to realize a shot as you have in mind, you really need to be able to control a camera. Better controls make you more efficient at it but having photographic controls should be considered a minimal requirement.

Any camera with manual-control can help you be creative and there are quite a few of them which are compact and cheap. There are even a few ultra-compact models. If you want to see what can be done with a $159 USD camera, check out the gallery of Wilson Tsoi done with a Canon Powershot A620. These shots require creativity to take. The lower quality means that a poster-size print will look quite soft and noisy but these are still great shots.

This shot is one of my best sellers. It was taken with a $150 Canon point and shoot mounted on a cheapo tripod. I'm pretty sure it was a 30 second exposure and I shot in jpg and did very little post-processing. Back then I didn't know how... Great equipment can help eliminate some flaws in a shot, but it won't help a poor composition. And mediocre equipment can certainly produce fantastic images.

I upgraded lens and tripod when I started shooting more nighttime work, but I didn't upgrade the body, I was just getting some sharpness issues that I couldn't handle. 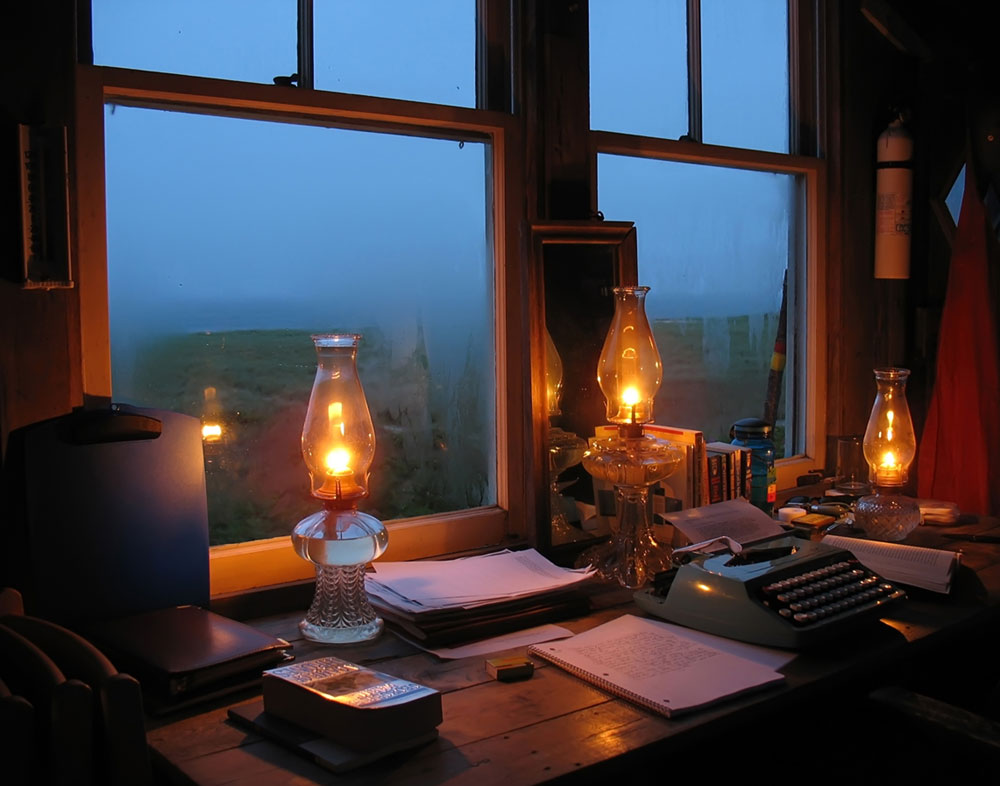 Ansell Adams took some revolutionary photos with equipment that we would consider primitive. Same thing for the darkroom techniques he raised to an art form. But he never attempted to capture scenes that were way beyond the limits of his equipment. He knew the capabilities of the technology available to him and worked within those confines while pushing the edges of that envelope as far as he could.

What makes a shot pro level that can be sold? Only one thing: a willing buyer. It is true that most buyers want technically perfect images with no noise and sharp focus, but that in and of itself will not sell a single photo. It has to be a photo that is interesting enough to make someone buy it. How do you go about learning how to make them? The same way many photographers over the last couple of centuries have: find a vision of an image that you can create within the technical limitations of the hardware at your disposal, and then keep working until you discover how to realize that image.

Many photographers will tell you that the equipment doesn't really matter and that while it may be more challenging to get the shot you want with a P&S or a crappy lens, it is still possible.

I think you're misunderstanding that sentiment. The idea is that a good photographer can work with limitations and still come up with an image that says something or has some visual appeal. But getting there likely means that you have to make some adjustments to the kind of image that you want to create. If you've got an old Brownie box camera with a small, fixed, dusty lens, you're going to want to figure out a way to say what you want to say with a photo that looks like it came out of an ancient Brownie box camera with a small, fixed, dusty lens. No matter what you do, there's no way you're going to get an image that looks like it was taken with a Canon 5D with your favorite L-series lens. This shouldn't surprise you.

Imagine asking a skilled writer to tell a story without using the letter 'n'. N is a pretty common letter, so that restriction increases the difficulty. Still, a good writer would think about the point that they want to get across in the story. They'd make some adjustments, and the story you'd get at the end would be different from the one you'd get without the restriction, but it'd still be a story that go the point across.

The writer might even use the restriction as a creative device just as Twitter users find creative ways to pack an idea into 140 characters. It's the same with photography -- you work with what you've got, you try not to let your limitations prevent you from making your point, and you look for ways to turn a liability into an interesting angle.

You're talking about a different kind of quality here. The image quality of your photos will have improved with better equipment, but an excellent lens won't help your composition one bit.

Most importantly, if such photographs do exist, how does one go about learning to take them?

Here is my secret. It is very simple: It is only with the heart that one can see rightly; what is essential is invisible to the eye. -The Little Prince

It is possible to take great photos with crap equipment but:

You can see the "pro photographer cheap camera" by digital rev series on youtube - really good photographers can get great result with totally piece of crap cameras but it's not easy.

In my humble opinion, having better equipment helps tremendously even without having great photography skills. yes, having great skills will improve the image quality...somewhat but most regular people won't even notice any difference. Anybody can take amazing pictures with modern DLSRs in auto mode.

Not the answer you're looking for? Browse other questions tagged philosophy or ask your own question.

2
How to improve image sharpness on Canon 700D?
2
Full Frame Vs Crop Frame
-1
Upgrade path for indoor sports photography from 7D + Samyang 85mm f/1.4 MF lens
0
Lens quality impact on sharpness
0
Why are my photo's not so sharp even when using a tripod?

6
Can one make good photographs with artistic sense but little real technical skill?