Commonly I hear of landscape photographers who rely on live view to focus now. The process I use is:

Can it be proven that this is in fact more accurate then using Phase Detect AF in my standard mode? I know many variables exist such as subject brightness, contrast, body AF performance, lens, and of course how accurate the human controlled adjustments are. But is it possible to more accurately or at least equally focus using live view even if conditions are optimal? Should I always live view focus landscape images if possible?

I even have graphs to back me up on this one. First a small excerpt of the blog post to explain the graph.

Then we took eight repeated shots using LiveView and manual focus (represented by red squares), spinning the focus ring between each shot to either infinity or absolute close up. The red squares demonstrate Roger Units (how well Roger can manually focus given all the time in the world on a tripod with a perfect test target.)

Finally we did the same thing but let the camera autofocus in LiveView (represented by green triangles), resulting in contrast-detection autofocus. In theory this should be as accurate as Roger is, perhaps more so.

The graph below shows the results of those shots. For those of you who are not familiar with our Imatest graphs, the numbers reflect the sharpness of the image in Line Pairs / Image Height. The sharpness in the center is shown on the X-axis and average sharpness on the Y. Higher is better and, in this test, better focus equals higher sharpness.

Now let’s throw away the repeated shot results from above since we’ve made that point, and replace them with standard (phase-detection) autofocus shots. These are taken in exactly the same way as the live view AF shots: take the image, spin the focus ring to one extreme, let the camera refocus, save the image. 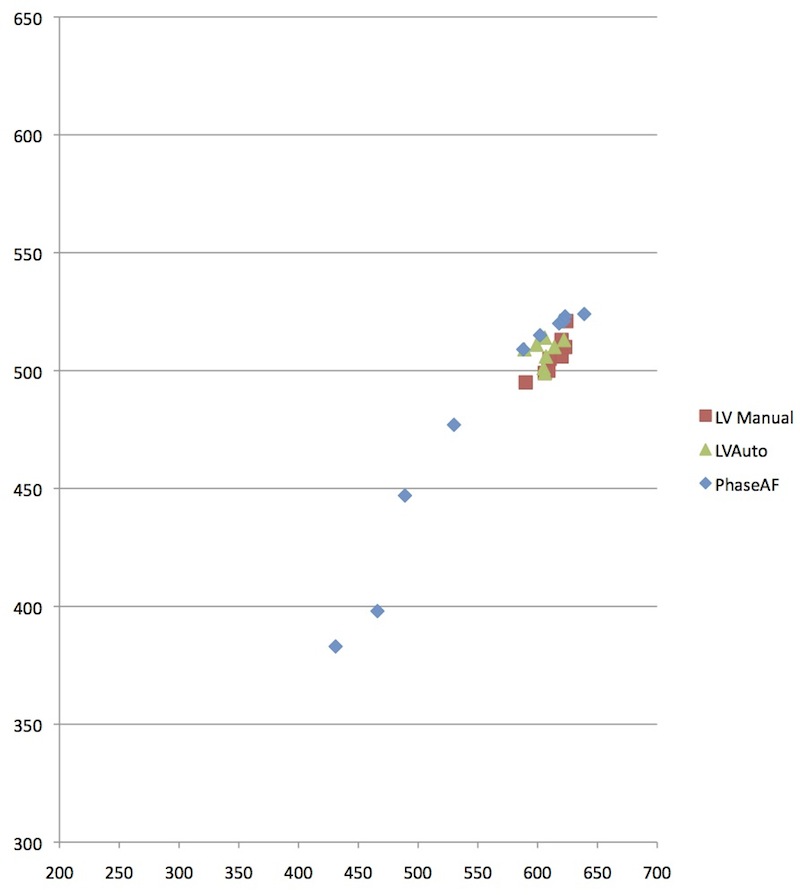 It's quite clear from the graph that phase detect AF is not as good as manual, and that the performance varies a lot more. You might be lucky and get good focus with phase detect AF, but far from always.

There are many problems with phase detect autofocus that make it inferior to manually focusing using liveview:

A human can be expected to perform better than the cameras contrast detect AF system in a few scenarios, for example when the subject is moving slightly (such as trees swaying in the breeze) as a person is able to recognise the content of the image and predict its behaviour better than a computer.

A human can, during focusing, re-evaluate decisions about the correct object to focus on (e.g. starting to focus on one area, then seeing another detail start to come into focus which is more interesting). A human can also dynamically vary the size of the region to concentrate on based on content, e.g. focussing on an individual branch, whereas most CDAF algorithms will only consider a fixed rectangular region of interest.

Additionally a human can be expected to provide finer adjustments to the lens position using a mechanically linked focus ring than is possible for the camera using the lens's AF motor.

Outside of those situations, given an appropriately flat, detailed area to focus on, a contrast detect AF algorithm can be expected to perform as well or better than a human, as it is easier for a computer to measure contrast than a person.

This depends on the camera. On most digital cameras the Live-View image is generated by sub-sampling the sensor. Most cannot read the entire pixels fast enough to resfresh the Live-View fast enough. This means the 1:1 view which is usually around 8-10X magnification is interpolated.

When the view is interpolated it becomes very difficult to focus there are no sharp pixels even when in perfect focus. On cameras that stop the MF Assist to show the resolution at which the sensor is read, focusing manually is easier.

Now the accuracy of normal Phase-Detect AF can be very good but it can also suffer from front-or-back focusing as well as a focus shift when stopping down the aperture. When this happens you are kind of stuck because DOF Preview produces an image that is rather dim and hard to focus anyways.

With Live-View, on many cameras you can focus with t he aperture stopped down and still get a bright image and can focus at the correct aperture.

Live view focusing takes place on the sensor that will be used to take the final image. If it's in focus there the final image will be in focus. Additionally, live view allows you to magnify portions of the image for finer focus, and to see the DOF effects of aperture settings.

AF on the other hand depends on a separate AF sensor within the camera, and a different image path. If there are any misalignments in the AF path then the image will be out of focus on the main imaging sensor.

The D800 had reports of focus problems when it was first introduced. Live view focussing was fine, but AF was misaligned. The affected cameras had to be re-aligned by Nikon to correct the error.

I use Canon DSLR with manual lenses and I have the efs focusing screen and sometimes I do use live view. So I don't know about others that might handle live view differently, but I do know Canon. Indeed, Canon x5 and x10 views make it tack sharp for accurate focusing.

Actually, in live view it is sharper than the preview of the taken image itself, when zooming in on it on the LCD screen. Sometimes I get confused that after I take the image it seems not sharp in the preview while the live view was tack sharp. Then I check on the computer and it really IS tack sharp.

And I do find manual focus more reliable than any AF in any of my AF lenses. Certainly, the AF can be faster than myself, if it gets lucky. This is why I prefer AF with FTM.

Moreover I've been using manual focusing lenses for quite a long time and I've always got the best results when I had the opportunity to use live view. No contest.

Getting straight to the answer...... yes indeed using liveview to focus is more accurate but i will have to disagree it is that important for landscape.

It just takes a little more seconds to shoot compared to auto focus. setting up a decent aperture will make sure your picture is sharp enough when shooting landscapes.

Where i use the liveview for focusing is when shooting moon (extreme tele shots) or when shooting smallest subjects (macro shots).Where i would require very accurate focusing as I have to open the aperture to the largest to compensate for my shutter speed, and acute focusing mistakes are a big blunder.

:) that's my opinion and how I shoot. If you can sort out my mistake if any i would be happy to know :)

11
When focusing in Live View, where is the point of focus?
4
How can I use a DSLR effectively with progressive eyeglasses?
4
What are the pros and cons of a viewfinder versus a liveview?
3
Is it possible to get a larger screen for live view, for precise manual focus?

3
Is it possible to get a larger screen for live view, for precise manual focus?
1
Why does my DSLR's viewfinder ignore the aperture ring on a legacy lens?
11
When focusing in Live View, where is the point of focus?
1
Pentaprism viewfinder and used "pro" gear - really better for manual lenses?
3
Can I magnify image on Canon 6D while in live view more than 10x?
4
Best approach for accurate & fast focusing of fully manual lenses without live view. Focus chip, focusing screen or another approach?
7
700D live view depth of field not accurate
3
Nikon autofocus refocuses when using live view
3
Canon 5DS Manual Focus Assist in Live View