What are the metal items on top of an older Nikon lens?

Does anybody knows what the two metal items on top of the lens are used for? 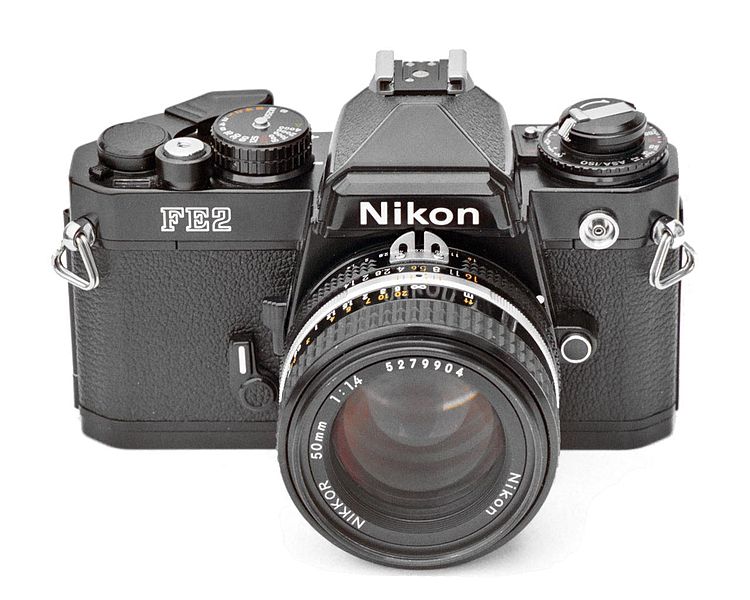 That's the metering fork, that was used to send information about the aperture setting from the lens to the camera on older camera models. The camera would have a pin that fits in the fork, so that turning the aperture ring moves the pin.

You can see some images of that at Useful Info: Nikon Lenses.

There is an image here showing the pin:

More specifically, the classic Nikon F's FTn meter required the coupling prong. As did Nikon's cameras that pre-dated the F. The first Nikormat's also used the coupling prong. The F2, which came out in about 1973, used the "AI" coupling, which was a notch in the aperture ring, so they and later Nikons did not use the prong. Nikkor lenses carried the prong for backwards compatibility through the 70s.

The coupling prong is why I shoot Canon. I have a huge collection of lenses for my Nikon F/FTn. I took a few to the local camera store and asked to show how I could use a new body with my old lenses. None of the recent consumer/enthusiast Nikon bodies could even mount the lenses. Sure, the F-mount is the same, but the pentaprism on new bodies sticks out and won't clear the prong.

I mounted them with an adaptor on a Canon DSLR, and it took great photos. So I bought a Canon 50D.

Corrections: (A) The S cameras which predated the F did not use prongs or the F-mount lenses. (B) Early F2s used the prongs as AI was not introduced until 1977, (C) All digital Nikons can use the AI and later lenses. The cameras without internal focusing motors can all use pre-AI lenses (e.g., D40, D3000, D5000).

They are there so that I can still use the exposure meter on my Nikon F2S !

Not the answer you're looking for? Browse other questions tagged lens nikon old-lenses or ask your own question.

8
What is the purpose of the little metal cylinder the focus ring of certain FD lenses?

1
How to avoid blown out highlights with the Nikon D300?
1
Which Nikon lens do I have?
10
What is the difference between the newly launched Nikon D800 and D800E?
9
What is the significance of the word “Color” in the names of some older lenses?
1
What is the lens on top of the 105mm lens?
4
What is the effect of lens haze on images?
5
What is this Angenieux lens?
4
What is this Hermagis lens?
2
What is the mount on this Sigma lens? It is smaller than Canon EF
0
Are there two different versions of the Nikon 24-120mm f/4G lens?