What features does a camera need to be used for good quality stop-motion animation?

I'm looking to buy a camera for my son to use for stop-motion animation. He has been using an old web cam, but he wants to step up in quality now. What features, eg. live view, resolution, etc, should I be looking for? I've looked at the Hue cameras but I'm not sure these will give the better results we're looking for. Of course, there's a budget, as he is just a teenager – I'd guess we wouldn't want to spend over about £100 at this stage.

You will get best results with the following features:

If your son is already using a webcam for stop-motion he is probably already using a certain software for doing so? If so maybe the software can control the webcam in focus and exposure. Then maybe getting a better webcam will be best. My webcam has very good quality and exposure and focus can be externally controlled.

In this answer to What is best for making stop motion animation - Digital camera or SLR? the suggestion was made to get good software first. I understand as a gift a tangible camera is nicer than intangible software. Also the software linked costs from $70. However, I am sure there are open source solutions for this (although I couldn't find one that allows manual focus).

Having had a look at stop motion pro Action HD ($140) and a Microsoft Lifecam HD Cinema ($???) or a Logitech C910 (I paid £60 through ebay 2 years ago) or C920, this solution would give good results on a low budget. In both cameras you can control exposure, focus and (Logitech only?) zoom from the software.

Do you need a need a better camera?

However, in all technical problems you can best improve things if you analyse what the greatest weakness is in your current solution. Without knowing the results you get I can only speculate:

My recommendation is that you select the best camera your budget allows from the ones that work with Stop Motion Pro. You can see the list in their What camera should I use? page.

SMP is a PC application that controls the camera and gives you a live preview in your computer monitor. With this software you can shoot your animation from your computer, preview the animation as you are shooting it, see real-time onion skinning, review previous pictures and retake the ones that did not come out right, and much much more.

If your son isn't using Stop Motion Pro or similar yet, then you may want to evaluate if it makes more sense to give him the software and keep your webcam for a while. The visual quality will not improve much, but he'll have a lot of options to improve the quality of his animation, all skills that he'll be able to transfer to an upgraded camera in the future.

What you would want is a camera that has manual settings for ISO and exposure.

As the exposure time is not critical, you would want to set it to the lowest ISO setting to get the best image quality.

You would want to use the manual exposure setting so that you can take all the images in a sequence using the same exposure, so that you don't get a flicker when you put them together. Set the aperture (f-stop) to the value where the lens gives the best image, and let the exposure time be as long as needed.

You probably want an interchangeable lens camera with the ability to set ISO, aperture, shutter speed, and focus manually. This rules out cheap point-and-shoots, and includes any DSLR or mirrorless on the market today.

Having a larger sensor (as in those DSLR and mirrorless cameras over a point-and-shoot or phone camera) can give a low-light advantage, but since you don't actually have any motion going on, and since you can control the light in your stop-motion environment (right?), this is less important than it is in many other cases. You should be able to get great results from a wide variety of cameras in this situation. On a larger-sensor camera, you'll want to stop the aperture down anyway, to make sure you don't have that miniature-scene razor-thin depth of field.

But there are two things I think are really essential:

So, in short: a low-end mirrorless interchangeable lens camera with wifi tethering should hit these points. (It will also have RAW capture mode and the manual control mentioned in other answers.)

First, I don't do stop-motion videos, but I'm very fond of it. There's only a small one I did though. So, at your budget I think it would be a compact (unless you found a really good second hand DSLR)

As others have mentioned, you would definitely need manual controls like aperture, ISO, Shutter. And I think it would be nice to have a zoom level around 8×. And I think you may want a macro focusing distance of less than 5cm. And, the most irritating thing my camera has is every time I went to review the image that I just took, it retracted the lens back to the body and we cannot shut that off. So, I strongly recommend you to beware of that.

And, I don't know the grid display is just a feature that every camera has, so....

And I recently saw one camera had a feature just for the stop-motion that the camera displays the previously taken photo overlayed on top of the live image view.

I used a free software called MonkeyJam to create the above clip btw. And though I didn't worry that much about lighting for that one, I think one or two lamps and something like this ↓ would be somewhat helpful (A mirror attached to piece of wood went through an old lens's cap (the mirror's tilt is adjustable)) 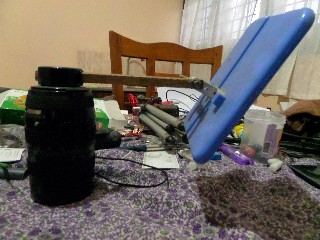 Not the answer you're looking for? Browse other questions tagged stop-motion onion-skinning or ask your own question.

4
What is best for making stop motion animation - Digital camera or SLR?
4
Do DSLRs allow use of electronic shutter for photography for stop-motion?

10
How to set up lighting for stop-motion photography?
11
How do I build my own soft-box light for illuminating still or stop-motion scenes?
4
What keywords should I look for to find a camera capable of remote capture and upload?
4
What is best for making stop motion animation - Digital camera or SLR?
4
Do DSLRs allow use of electronic shutter for photography for stop-motion?
0
Lighting needed for 2-D Stop-Motion Video
1
How to normalize brightness of individual images (post-processing) for a stop motion movie?