Why is the main sensor not used instead of the separate AF sensor to focus a DSLR?

From this answer I understand that the reflex mirror of a DSLR is actually not reflecting all the light, but it passes a certain amount on to the AF sensor.

So if the reflex mirror can pass light, why not use the main sensor (which is directly behind the mirror) for focussing?

Note:
In a comment below the linked answer it is noted that the AF sensor requires a lens to focus beams of light on the appropriate location of the sensor as it is smaller than the main sensor (italics is my own assumption). If the main sensor would be used, would this additional lens still be necessary?

Phase detect autofocus works by measuring the horizontal displacement between brightness patterns projected onto the AF sensor. To measure the displacement, pairs of 1-dimensional arrays of monochrome pixels are used. This is what the AF sensor in the Canon 5D mkIII looks like: 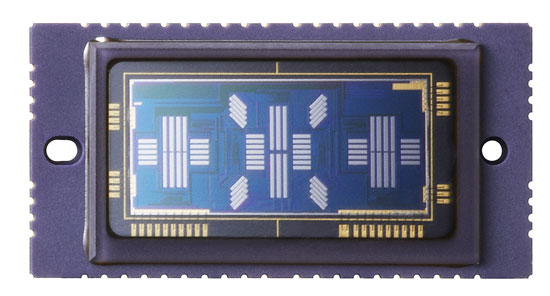 This approach has a few advantages:

There are drawbacks to using the main sensor.

Your assumption is not quite right. It's not to do with having a smaller AF sensor, the AF "lenses" are actually one lens with a wavey 'B' shaped profile. This lens focusses light coming from either side of the lens onto different parts of the AF sensor.

You would still need some sort of lens to do this job when using the main image sensor, and it would have to swing out of the way when taking a photograph along with the reflex mirror, requiring a complicated mechanical arrangement within the camera. This is the main drawback with this approach, though there are other obstacles:

However manufacturers have developed a slightly different method for phase detect AF which does use the main sensor. It was developed for mirrorless cameras which don't have the option of a dedicated AF sensor and which have traditionally relied on the slower contrast detect method using the main sensor.

Instead of a pair of AF lenses in the light path to direct light from either side of the lens onto different parts of the AF sensor, pairs of regular microlenses with alternate halves blacked out can be used to get a similar effect (pixels with the left half blanked will mostly receive light from the right side of the lens and vice versa).

This enables a hybrid AF approach using a combination of phase (to get close to the right focus) and contrast detection (to finetune the result).

Speed is probably the main reason why the imaging sensor is not used for focusing in most DSLRs. AF was developed near the end of the film era, so using the "sensor" (the film) for focus was not an option. Most phase detection AF systems were "open loop" built for speed more than accuracy. Only recently have the major camera makers begun designing lens/body systems that utilize "closed loop" communication between the body and lens during phase detection AF. This has allowed phase detection systems to approach, and in some cases equal, the accuracy of contrast detection AF. Although contrast detection AF using the main sensor is improving in speed, because it is a multistage process that requires several "move and measure" cycles it is still slower but typically it is also more accurate.

While there may be rare exceptions, all DSLRs I'm aware of still use mechanical shutters. This means that the main image sensor is covered during focusing and metering. There have been a few mirrorless models that only have a second curtain shutter, but technically speaking they are not DSLRs.

To use the main sensor for phase detection AF would require the shutter to be open in order to focus, the first curtain would then close before opening again to expose the image after which the second curtain would close. Even when shooting 8+ frames per second the most advanced DSLRs focus between each shot (if instructed to by the settings the user has selected). Currently DSLRs reset both curtains at the same time while the mirror cycles and the AF focuses. To use the image sensor to focus, the first curtain would have to remain open until the mirror had dropped back down and the camera achieved focus lock, then the rest of the camera would have to wait for the first curtain to close and the energy absorbed by the sensor during focusing cleared before the first curtain could reopen to begin exposing the picture. This would slow down the overall process when the whole point of phase detection AF is speed. Contrast detection AF used during Live View which does use the main imaging sensor to focus, on the other hand, is generally more accurate but slower.

The main sensor in a DSLR has one function and one function only, and that's to record an image and do so very very good.
Compromising on that by building in additional electronics would degrade the quality and performance, so why do it when there's perfectly good dedicated sensors available?
Also, DSLRs evolved from film SLRs where of course there was no electronic gadgetry built into the film that could be perverted for the purpose.

Specialized devices work better and more efficiently at what they do.

Autofocus sensors used in DSLRs are highly tuned for performing autofocus quickly and down to very low light levels.

If you used the main sensor to do autofocus, you would have two options:

Reality is that the mirror only lets through light in some areas and that most of it is fully reflective which gives you a bright view.

Sony has SLT cameras which have a truly semi-reflective mirror (30% / 70%) which is their solution to provide both Live-View and Phase-Detect Autofocus at the same time. This lets them use a dedicate Phase-Detect sensor to make Autofocus speed and avoid back-and-forth lens movements which is terrible for video. The sensor does lose some light reaching it so it has to be more sensitive to produce the same effective ISO which is a disadvantage when it comes to image quality. The light reflected upwards is too dim to make a nice optical viewfinder, so they had to fit in an EVF.

Simply put, the same reason you don't drive a semi-truck to work in the morning (unless you're a trucker). The AF sensor can do it's job better when it doesn't have to compete with the image sensor for surface area. The sensors are different in nature and while there are some designs that incorporate AF sensors in to the imaging sensor, it means that areas of the imaging sensor are not capturing the visible light hitting those areas as well as it could.

There are hybrid sensors that can do both the AF and the light sensing for the image, but they tend to do neither job as well as a dedicated sensor for either. It might not be by much, but it is enough that if you are trying to get the best AF and the best image performance you can, separate sensors still do a better job.

One possible reason that has nothing to do with autofocus is that the image sensor must be cleared of all charge before an image is taken. Using the main image sensor for AF/composition, as is done with all liveview cameras (most of mirrorless), does require that the sensor be turned off and cleared of charge before the image is taken, otherwise you'd have some ghost of the liveview image on the taken image.

This is one of the reasons for shutter lag on liveview only cameras. dSLRs don't depend on liveview.

And no, if you use the main sensor for AF, then you do not need to have the separate lightpath/lens for the separate AF array. Mirrorless cameras are much much simpler than dSLRs because there is no mirrorbox assembly and no need for separate AF and exposure sensor arrays and lightpaths.

In his "Demise of the dSLR" blog post, Ming Thein estimates from his personal experience of disassembly, that mirrorless cameras have 60-70% fewer parts than dSLRs.

Not the answer you're looking for? Browse other questions tagged dslr autofocus sensor camera-design or ask your own question.

35
How does autofocus work?
8
Where is the AF sensor located in a DSLR?

8
Why not have the diaphragm in camera body instead of the lens?
8
Where is the AF sensor located in a DSLR?
0
Why do camera manufacturers advertise image processors but not the sensor itself?
8
Why is the IR filter present when there is already the Bayer filter on an image sensor?
2
Why does my DSLR focus on the background instead of my subject when taking shallow DoF photos?
30
Why is there "single" in the term DSLR (Digital Single Lens Reflex)?
0
Why do DSLM designs almost never shift the sensor plane all the way back to save on thickness?
1
What does the solution used in DSLR sensor cleaning kits contain?
2
Why aren't multi-aspect sensors commonplace on high-end cameras?