Can Focus Stacking produce the same effect as Tilt-Shift?

A lens with a tilt adjustment is capable of producing a plane of sharpest focus that is not parallel to the image sensor. Could a lens with no tilt adjustment produce the same image, if many images with different focal distances were stitched together?

I've included a picture to help illustrate the question. I am asking from a technical standpoint, what effects or adjustments on the camera would cause differences, and how would they manifest. 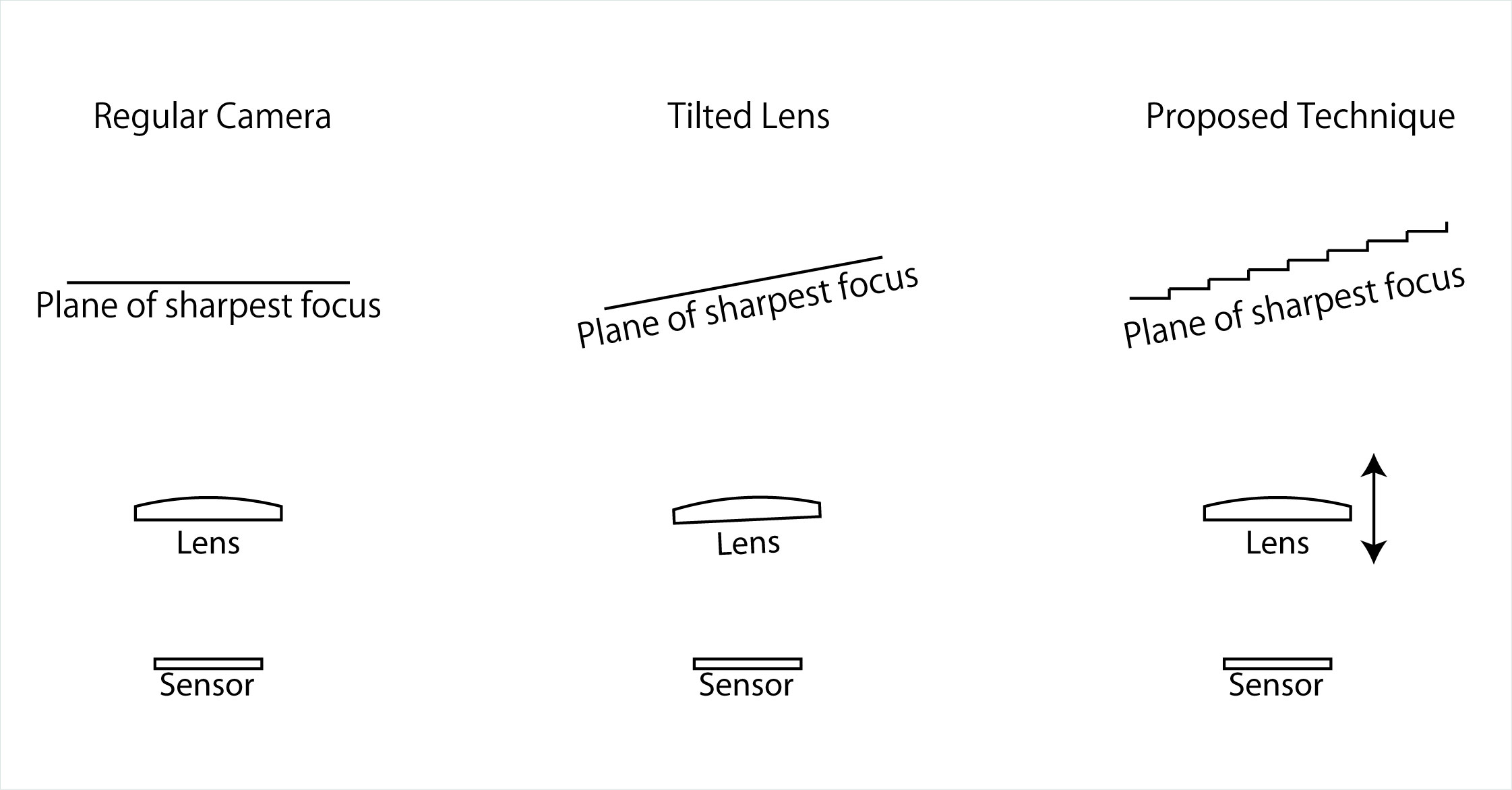 I thought more about the question and I think the question I am trying to ask is if the wedge shaped depth of field (Scheimpflug principle) produced by the tilt of a tilt shift lens is because the region of focus is getting closer to the camera (less depth of field) or because of another effect.

You could, but it wouldn't work exactly as your illustration suggests except in very simple scenes.

If the aim is to produce an image that has as much in focus as possible (the traditional purpose of tilt movements), then focus stacking without regard for an imaginary plane of focus is a simple, effective and highly automatable solution. Despite the fact that (OMG!!!) you'll lose some of the original sensor data, the mere fact that things aren't poking inconveniently in and out of a real plane of focus that is limited by real-world physics makes the image better than the real thing. (You only get so much depth of field, even with a view camera's movements and f/64.)

But when you're trying to place a distinct plane of focus (along with out-of-focus areas) into a complex scene, there would be a lot of manual work and you'd need to have a pretty good mental model of what an actual tilt image of the scene would look like. It would almost be easier, I think, to do a regular "get everything sharp" focus stack, then take the resulting composite image into an application (or module, plugin, or whatever) that allows you to apply a depth map and add lens blur. The process would be similar with a stack of images; you'd need to paint in the things that should be in focus, as well as the bits from other images that are appropriately out of focus for a given part of the image (and would probably have to do some gradient blending as well to get the right bokeh transitions).

Not the answer you're looking for? Browse other questions tagged effect tilt-shift focus-stacking or ask your own question.

15
How do I tilt a lens to get an entire street in focus?
2
How to focus at several locations at once?

1
How do I achieve this minature/tilt-shift effect?
4
Can this cheap tilt-shift compact camera produce good results?
9
How to Maximize the Miniaturization Effect With a Tilt-Shift Lens?
4
Why does this shot appear to have the miniature "tilt-shift" effect?
7
Can the lensbaby achieve a similar effect to a ± 8.5° tilt?
1
Can the tilt-shift effect be reversed by a light field camera?
15
How do I tilt a lens to get an entire street in focus?