I'm trying to learn how to take photos that are color accurate. I'm testing on a newly painted wall in my kitchen, and has a biege paint with some green tone. http://www.flickr.com/photos/the_old_curmudgeon/8513358623/in/photostream does not show the hints of green.

I just bought both a Xrite ColorCheck Passport and a Vello "digital gray card" and am trying to learn how to use them. I also have a Pantone Huey, and have calibrated my monitor.

Which one is right?

The white balance card on the ColorChecker Passport is spectrally neutral. It is deliberately not an 18%-reflectance card (it reflects considerably more than 18% of the incident light) so it can't be used for an exposure card without knowing what "Zone" that tone lies on in your camera at the current ISO setting. It does, however, reflect equally across the spectrum, so it can be used for white balance (and you get finer distinctions in value with tones above middle level).

The black-to-white squares on the "classic" card (the one with the "+" in the centre and corner brackets that's used with the profile creation app) are also spectrally neutral, and picking one of the two lighter greys (not the white) should give you the correct white balance.

On the "creative" card, most of the squares are intended to give you a warm or cool white balance. The row with the people icons will give you a shifted white balance for pleasing skin tones; the row with the landscape icons will give you more magenta or green in the mix when you shift white balance, in addition to warming/cooling the Kelvin temperature (which only affects the blue/yellow balance). The centre square in the "landscape" row is a neutral WB, essentially the same as the WB card.

Note that white balance is only part of thee equation if you're aiming for colour accuracy. Creating and using a camera profile is also part of the deal. Not only are there camera-to-camera differences and lens-to-lens differences in colour rendition, there are also some baked-in manufacturer's "looks". In some cases, they're significantly less biased than, say, the difference between Kodak, Agfa and Fuji films of a similar contrast and saturation, but they're still there. F'rinstance, your camera may be deliberately ignoring the greenish tinge because, under most non-foliage circumstance, green is kind of icky (to use the technical term), so the camera's electronics (and the default camera profile) may be biased towards ignoring greens with little saturation for aesthetic reasons.

So, to sum up: shoot the ColorChecker Passport with the "classic" and "creative" cards visible, then continue shooting as normal unless/until you change something (camera body, lens, lighting). If you really want to set WB in-camera, shoot the WB card. (If you use a grey card, understand that it's designed for exposure, not necessarily for white balance. They're usually close enough for most purposes, but unless there's a time limit on the card, it won't be suitable for accurate colour.) When you go to post, first create a camera profile (which will involve creating a DNG from the raw image of the Passport). Apply that profile, and open the image of the Passport in your RAW converter. If you want an accurate, neutral white balance, select the centre square of the "landscape" row on the "creative" card. Correct the exposure as necessary. Then apply those adjustments (white balance, profile and exposre) to all of the images taken in that series. Rinse and repeat with other series.

The ColorChecker targets used in X-Rite's Passport system were not created for the purpose of only setting a cameras white balance. They were created to build profiles for your color workflows that (if made properly) will correct white balance and get many colors closer in your scenes. So to answer your question "Which one's right" is dependent on how you use them and what you expect the results should look like. All cameras fail in various ways when it comes to "knowing" what is happening in a scene they are shooting. The make some pre=suppositions based on known information about the cameras sensor and the amount of light striking it, but

So as you mention that your trying to learn to use them, I would suggest not using the ColorChecker Passport system as a gray card, but do use it to profile your camera. As was mentioned above the neutral patches in the ColorChecker are spectrally neutral. See the plot below: 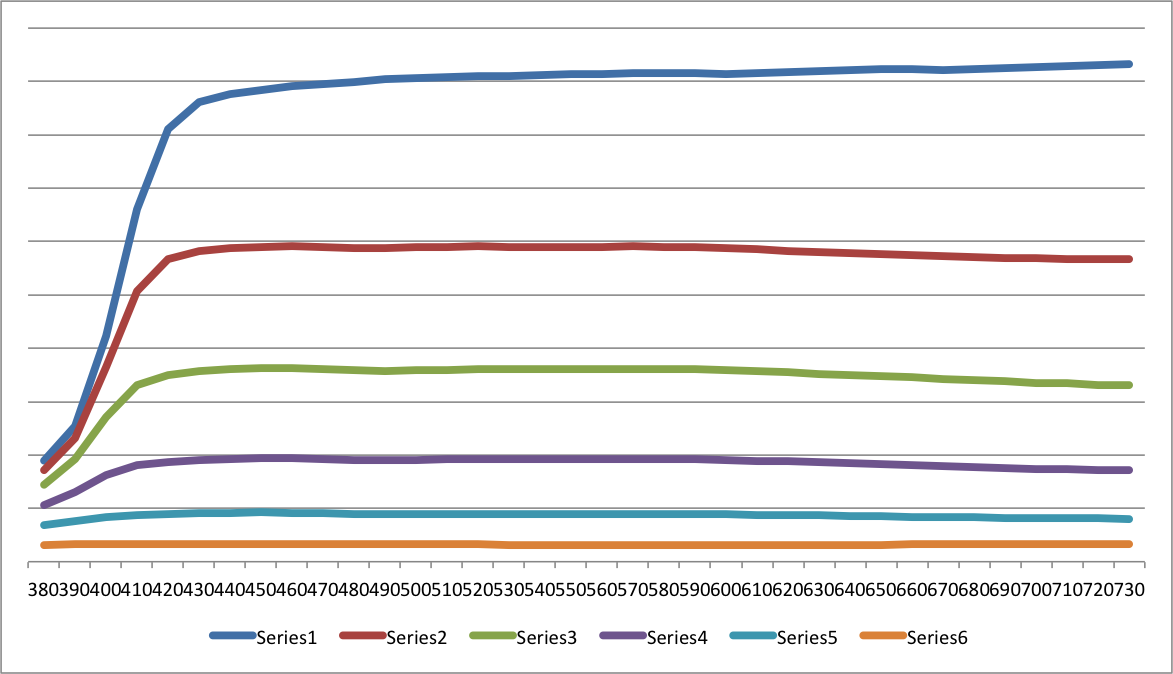 As you can see these lines are almost perfectly straight in the visible spectrum and don't include a UV component as the plot values are reduced in the UV spectrum.

There is also a ColorChecker Passport White Balance Target that you can use, but since you have the better target already, just use that one.

The purpose of this target is to correct the camera rendering to more closely match a scene. It does that by having a target known values that after shooting produce "different values" Then a matrix is created to correct the differences, and that becomes a profile for Photoshop or an ICC profile for your workflow.

The reason this is a better way to go is simply because a profile will adjust colors based on what happens with the white point. ColorChecker Passport Camera Calibration Software – includes both a desktop application and an Adobe® Lightroom® Plug-In for creating custom DNG profiles.

Remember that all the color management in the world may only get you close in some instances. Targets like the ColorChecker contain a bunch of pigments, but may not contain a pigment close to the paint your photographing. So they calibrate for the 24 colors in the target and if your scene improves, great if not, then it's up to you to know what to do next. That's why image editing is still needed. RGB captures are inherently metameric and due to the fact that no sensor actually see's like human vision, it appears their future is safe for now at least.

It's hard to tell what is happening without seeing how you are using the grey cards, but you are probably having differences as a result of reflected light hitting it with slightly different colors. Making sure to hit it directly with a uniform color and intensity light source might help mitigate the problem some.

The Passport ColorChecker only has a single 18% gray square, it's the 4th from the white on the bottom row (see http://xritephoto.com/ph_product_overview.aspx?ID=1257&Action=Support&SupportID=5097 for some info). They don't seem to indicate that the all-gray card is 18%, which surprises me, they actually encourage you to buy a different product that is 18%.

However, since I don't have the docs... I would suggest that the Vello and the all gray ColorChecker are probably within margin of error for each other.

Color temperature measurements are more accurate with a brighter target. That is why some cards of a white side and a grey side. The white is to measure WB and the grey is to meter.

While the grey side looks neutral that is not its intent and this may be why results are different for that measurement.

EDIT: From you sample images, one of your Vello cards looks meant for WB and it is not the one you are using :) That one is meant for exposure.

Photographically, grey is just dark white, so it depends more on the exposure of the WB target than on its actual brightness. The only catch is that most cameras perform their own exposure for taking the measurements, while others let you measure from a captured image.

With a software such as Lightroom, you should to measure from a bright but not over-exposed area (in ANY channel) which you know is neutral grey. This will give you a high-level of accuracy.

In theory, the WB targets should match but the lower the value, the greater the error. It is possible they do not match because the lighting is not uniform. If a shadow is fading out over patches it may affect color-balance.

EDIT: Not sure if you have lighting off-camera but if you do, you may be shadowing the grey card which would affect the balance of light. Incidentally, if YOU are wearing a colored shirt, it may be tinting the card too.

Most of your values seem to be within 200-300K of each other, which IMO is well within a margin of error.

Do you want the image to look like it does to your eye, with the warm sunlight through the window hitting that wall, or to look like it would if you pulled the blinds and shot the same wall with a neutral studio flash? The difference in colour temperature of those two setups would vary more than the margin of error you're getting.

Your Vello grey card should be neutral, and I imagine has the advantage of being a larger target. And it's giving you a value that is near the midpoint of all the other values you've collected, so I'd conclude it's the most accurate.

Also if you're selecting a pixel to judge white balance, make sure you sample for example 3x3 pixels (or more) rather than just a single pixel, in case there is some colour variance.

Not the answer you're looking for? Browse other questions tagged color color-management white-balance or ask your own question.

0
Grey cards and there understandings