How can I avoid soft dull "spots" in my pictures?

Recently, I've been doing a lot more photography, particularly with my 100-400mm telephoto and 16-35mm wide. I am skilled enough that I can capture the shot mostly as I want with just the camera gear, requiring minimal post processing. I'm a huge fan of ETTR now, so most of my shots are overexposed to support more shadow DR and improve the noise performance of my el-chepo 450D body.

I've noticed quite a bit lately during post processing in lightroom that my sky's or any other lighter areas of my shots tend have spots on them. They are soft and dull to one degree or another (seems to depend on the zoom factor), so probably something either on the sensor or the lens. I'm having a hard time figuring out exactly what they are, as I try to use my lens pen brush before any shoot, yet I still have them. I am having to make quite a few healing corrections post-process to get rid of them.

Is there an easy way to identify where the spots are on my lenses? Once identified, if a quick brush of the outer lens element with a lens pen (or soft camel hair brush) doesn't do the trick, does that mean the spots are on my sensor? Is it possible there is particulate inside the lens body (all of my gear is less than a year old outside of my 450D body, and its all Canon L-Series gear, so I would home that I don't already have detrimental particulates floating around inside my lenses messing up my shots. :|)

Here are a couple examples. The spots are harder to see on screen, and I first noticed them when I printed a few of my more recent shots. There are quite a few, and the shot the examples below were taken from, where the sky took up about 30% of the top edge of the photo, there were probably 10-12 different spots, some of them darker, many of them lighter. The darker ones are the ones that are very visible in prints, where as the softer ones are not as visible, but still apparent enough to ruin an expensive print. 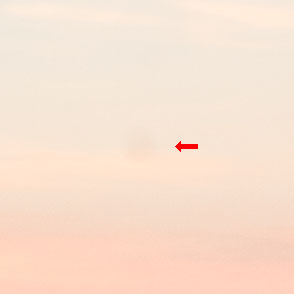 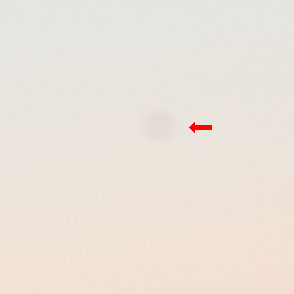 Some dust spots on the sensor will absolutely not shift with air-pressure (blowing) alone. To shift them you need to wet clean the sensor.

I was nervous the first time I did this as I can understand most people would be. But it is not that difficult or risky, basically it involves wiping the sensor assembly with a soft rubber "wand" with a cleaning fluid dampened wipe attached to it. At this point it's worth stressing:

You are not cleaning the sensor microchip itself you are cleaning a toughened piece of glass (the low pass filter) that sits on top of the sensor.

The only damage you can do (when using the correct fluid) would be to the delicate shutter curtains, so make sure the shutter is open and will remain open for long enough to clean the sensor. This usually means ensuring the camera's power source remains uninterrupted.

Eclipse fluid has been tested on all sensors and determined to be safe. It's basically just alcohol and will evaporate without residue. See:

Likewise PEC PADs are highly recommended to go with it. I suggest you get a kit that includes the basic rubber wand, fluid and pec pads, then replace the fluid and pads as they run out. This is a very cost effective solution compared to all in one wet cleaning solutions. All you have to do is wrap the pads round the wand and tape them each time.

I'm willing to bet that that's dust on your sensor, not on the lens.

If you stop down to f/22, that can help to confirm that assertion, one way or the other. My sensor dust would really show up at the smaller apertures.

If they are indeed on the sensor (and they really look like the dust spots I got on my d70 and d200), you can try some of the Visible Dust products to clean it. Before I got the d300 (with the dust-shake on startup), one of their brushes was like American Express or a polarizer, I never left home without it.

I would stay away from any liquid-based solution, however-- I once tried one of those, and it ended up mucking up my d200 sensor glass.

Also, do not blow on the glass with your mouth, use a blower or something like that. Your mouth has spit, and once that's on the sensor glass, you're in for a much harder cleaning job.

Edit to address the comments below (because my comment was longer than the allowed number of characters):

@jrista, @Reid-- The lens has two places where it's in focus, on either side of it. There's the side outside the camera, and then there's the focus on the detector (the eyepiece or the film/digital detector). Stopping down increases the 'thickness' of the focal plane, which is still generally outside of the lens itself-- I can't imagine an optical configuration that would allow focus inside the lens, but maybe they could exist. If there's nothing in the focal plane outside the camera, then the only place for the dust is on the sensor. Stopping down just brings the dust into focus, so that when the light is collected by the sensor, you'll see the dust.

Incidentally, I can see dust on the light path to my eyepiece that isn't on my sensor using this trick. Since that dust is just annoying but doesn't affect my process significantly, I just leave it be.

I regularly get dust on the sensor, and clean it with a brush and an air blower when there is too much.

A few spots can easily be removed using the healing tool in the post processing. As few as 10-12 spots is barely worth cleaning the camera for.

I have an Olympus 1030SW Digital camera and have been getting round ghostly circles in some of my photos. I just spoke to Olympus customer services and was advised it has to do with light reflection from dust in the air particularly when using flash. Nothing wrong with the camera but the downside of some digital cameras because of settings. His advice was to move a few steps to the right or left when taking the picture to get a different angle to the light. I did and have got some perfect pictures after dreadful ones of the same scene a few minutes earlier. He said I could also increase shutter speed - a bit too technical for me.

Not the answer you're looking for? Browse other questions tagged troubleshooting cleaning artifacts spots or ask your own question.

6
Are these spots on the sensor or the lens?
1
Strange spots on the image when filming video
1
Where do these weird spots on my photos come from?
12
How to spot dust in images quickly while doing a shoot outdoors?
7
Purple spots in my shots!
6
Why are these black dots / spots appearing in my pictures?
9
Dust-like speck visible every few pictures — is it dust, or worse?
1
Faint spots appearing on images

5
What creates this strange flare and how to prevent it?
4
Why am I getting soft images with my Sigma 24-70 f2.8?
2
What are these dark spots in my pictures?
2
What could cause pink spots on my RAW photos?
8
Why does my sensor require frequent cleaning?
2
Lens cleaning pen - disappointed by results, is this working right?
2
Are these strange splotches on buildings in a long-exposure photo hot pixels?
1
How do I clean the grime spots I'm seeing in my camera's viewfinder?
4
Orange and other artifacts in photos from film camera
2
How can I remove spots on my lens?