Why are my tone mapped images turning purple?

As I've been developing a few images into tone mapped images in Photomatix, some of the skies that were blue seem to be turning purple. I'm not quite sure why. I take 3 bracketed RAW images, which individually all seem to have blue skies. When combined and tone mapped in Photomatix, the skies turn quite purple to my eye. I haven't altered the temperature or gamma in Photomatix at all.

Non-tone-mapped, untouched, image on the left, Tone-mapped from 3 source RAW files, no processing done outside of Photomatix on the right: 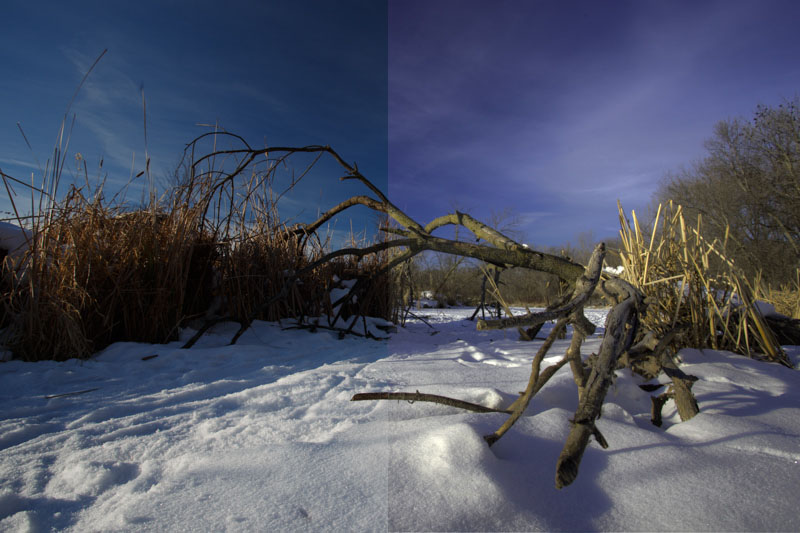 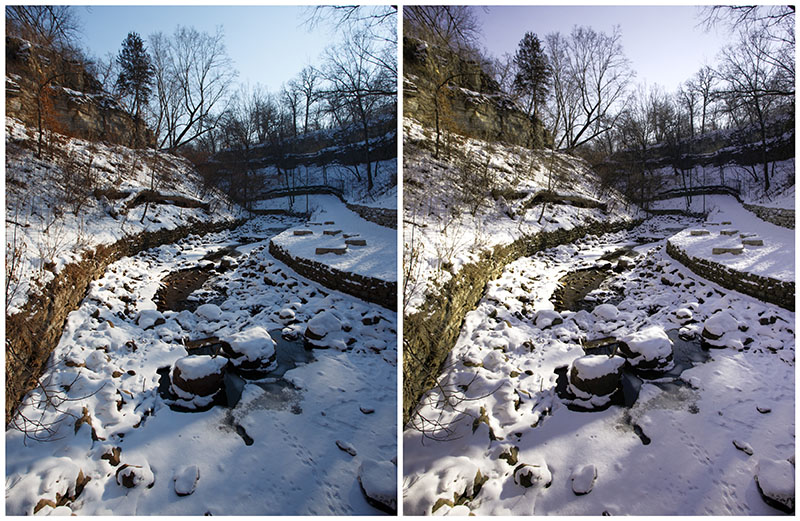 The interesting thing here is that's not a colour cast, the hue values are messed up. It's not just that all the colours have been pushed toward purple, which can happen for certain white balance settings, what's actually happened is that all colours are shifted round the colour wheel, blue/cyan -> purple, orange/brown -> green.

Here's the right hand part of the first image, with the hue shifted left 16 degrees:

When compared the left hand side the colours are not exactly right but pretty close:

This to me indicates that there's nothing you've done wrong this is a bug in Photomatix. Either the internal representation uses a YUV style colour space and is suffering from some sort of offset error, or your camera has somewhat nonstandard dyes in the CFA and Photomatix is using the wrong camera profile when demosaicing the RAW images resulting in the colours being shifted as the blue values are interpreted incorrectly.

My money is on the second explanation as I've seen very similar results when doing RAW conversions in Lightroom if you modify the hue of the blue primary in the camera profile.

An easy way to check this hypothesis is to convert your images to 16bit TIFFs and then import them into Photomatix. If it turns out this is the case there may be some settings in Photomatix to do with RAW conversion. If not you may have to file a bug report. In the meantime you should be able to shift your colours back using the Hue/Saturation/Lightness dialog in Photoshop/GIMP.

Blues turn purple when the saturation of the blue is reduced in LAB because LAB is not perceptually uniform. See http://www.brucelindbloom.com/index.html?MunsellCalcHelp.html

In your first picture, the sky is already very saturated in the "before" version. I also saw that you have the saturation setting pumped up. I have no idea what color space Photomatix uses, but try reducing the saturation- it could be that the image is saturated beyond the gamut of your monitor.

Not the answer you're looking for? Browse other questions tagged hdr color-correction tone-mapping or ask your own question.

10
What issues are there with printing 32-bit HDR images?
2
Colour correction/Colour balance in Post processing of Raw images
5
What uses does tone mapping have beyond HDR?
3
What is the difference between global tone mapping and curve?
6
Why are high white balance temperatures redder when warmer objects are bluer?
1
Why does white balance knob have green and purple setting?
3
Is tone mapping automatically applied to RAW images?
3
Image colour inconsistency between browsers, image viewers, and Photoshop
1
Which of these ND filtered images do you think is more accurate? (sample images included)