Why do my photos show blocky gradients, even in RAW?

I am learning to use my new DSLR, a Sony a57 with 18-55mm kit lens. I was shooting last night at sundown, and after exporting the RAW images to Lightroom, was surprised to see the gradient as showing blocky areas. I was shooting with ISO 200, with .4sec exposure and f22.

I have exported this to JPEG, I know this will increase the blockiness via compression but have checked the RAW and JPEG side by side and they RAW also displays artifacts...

What cause blocky artifacts in the dark blue sky in these type of shots? Could adjusting the exposure cause this to be a smoother gradient?

Here is the actual shot taken: 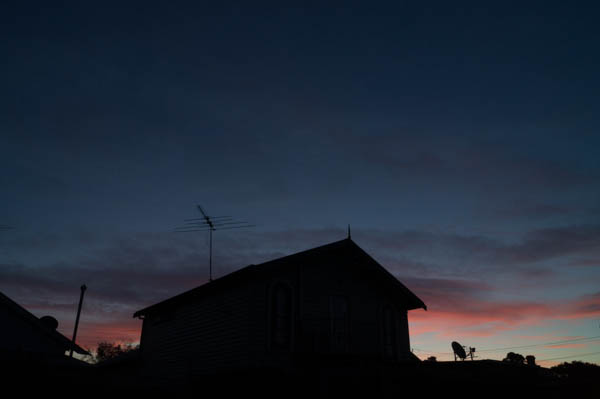 I think the other answers may have missed the issue here.

Seeing compression artefacts on a RAW file in Lightroom is quite a common issue and it drove me nuts when I first encountered it. It turns out what you're seeing is just regular JPEG compression in the preview image that Lightroom generates. For performance reasons, in the Library module Lightroom only loads the preview and not the original RAW. The banding should disappear when you switch to the Develop module and the RAW is loaded. (Sometimes you'll find you need to zoom in to 100% and back out to force load the RAW - that seems to be an intermittent bug.) You're absolutely right that you shouldn't be seeing those blocky artefacts in a RAW file.

You can force Lightroom to generate higher-quality previews with fewer JPEG artefacts by going to Edit > Catalog Settings... > File Handling and set Preview Quality to High.

This problem can be one of a few things:

Regarding case #2. At the low end of the image signal range (the shadows and lower mid-tones), sometimes colors in a gradient organize into large bands of the same color separated by discrete steps. It may only be a difference of a one or a very few levels between one band in a shadow gradient and another, but that difference can often be detected by our eyes (which are very sensitive to changes in luminance, especially when the bulk of that luminance is similar in tone.) Sometimes minor discrete changes in luminance are rendered incorrectly due to a lack of precision in rendering algorithms or a lack of bit depth (which is actually really case #3...but we'll get to that). At the high end of the signal range, there tend to be many more levels available, and gradations can be much smoother using more changes in tonality, so banding does not show up as well in brighter photos or brighter areas of a photo than it does in middle toned and shadow areas.

Leading on from case #2 is case #3: bit depth. Most digital photographs these days are capable of representing a far, far richer set of data, both in terms of luminance and gamut, than the average computer screen is capable of. Most cameras are 12 to 14 bit, thus producing two to four orders of magnitude more color information than the average 8 bit computer screen is capable of. This causes quantization of color information when it is transformed from its original color space (that of the camera device, 14-bit RAW image and ProPhotoRGB gamut most often) into the computer screen color space, usually 8-bit sRGB gamut. That transformation has to group the greater volume of colors into a lesser volume of colors, and at a lower precision to boot. The result is often posterization and what some would call "noise" or "grain" in gradients.

There is nothing actually wrong with your image, it is still there, in tact, in all of its original high-precision, high bit depth, wide gamut beauty. Your hardware is simply incapable of handling it in it's native form. Modern software and hardware is usually capable of dithering during this transformation from "high" to "low". That is the source of the "grain" that many can see, however that graniness is actually the reason the posterization does not look a lot worse when viewing a 14-bit image on an 8-bit screen.

The solution to case #3, and to a degree case #2, is to upgrade to better hardware. Better hardware could be a better video card that is capable of crunching more complex pixel shaders. Increasingly these days, image editors like Photoshop are moving to GPU-based rendering. The average consumer-grade gaming GPU is geared for speed, and to achieve that speed, precision is often sacrificed. Switching to a professional-grade GPU, like Nvidia Quadro, will usually allow more precise rendering of the kind of shaders used in a tool like Photoshop (and, hopefully, Lightroom 5 when it finally hits.) That should help alleviate some of case #2, where it is caused by lower precision rendering algorithms.

Moving to a professional-grade video card like a Quadro will also open up another avenue: 10-bit displays and high bit depth hardware LUTs (color Look Up Tables.) Screens from the likes of Eizo, NEC, LaCie, etc. are usually capable of 10-bit rendering from a 12, 14, or 16 bit hardware LUT. The high bit depth LUTs allow for billions of colors, and the 10-bit displays are able to render those billions of colors using advanced hardware dithering (this actually achieving real-time display of all 12 to 16 bits of color information by interleaving the extra color information over time via the 60hz refresh rate). Using a 10-bit display with a 14 or 16 bit LUT will effectively eliminate any posterization when editing 14-bit RAW files. The catch here, though, is that you must use software that is actually capable of taking advantage of 10-bit displays, their LUTs, and the GPU's that drive them. Some Adobe software like Photoshop CS6 supports this, but only when you have a professional-grade OpenGL GPU like Quadro, a DisplayPort (neither DVI in any form nor HDMI will work) connected to a legitimate 10-bit display.

You are probably seeing noise. Very common in underexposed skies.

Also you may be seeing banding, also common in underexposed skies where there is limited information (all pixel values about the same and at the low end of the histogram)

The best way to avoid this is to increase the exposure. You can expose to the right (expose so that more of the histogram is to the right) then adjust the exposure back down in post-processing to bring out the colours in the sunset.

You can fix in post processing using anti-noise software. Ironically you can fix banding by adding a bit of noise back in!

Remove any filters that you may have on your lens. Take a photo of a white wall or white piece of paper in even lighting. If you are still seeing the gradient, try taking the picture upside down and also try another lens. If it happens with both lenses or if the gradient appears in the same direction regardless of shot, then you might have a damaged sensor. You may want to post links to a few images showing the gradient so we can better judge.

Not the answer you're looking for? Browse other questions tagged raw night artifacts or ask your own question.

26
What is ETTR (Expose To The Right)?
31
What is noise in a digital photograph?
6
Why does darkening skies in Photoshop cause banding, and how can I avoid it?

36
Should I be shooting in RAW even though I'm a beginner that doesn't know how to retouch photos yet?
3
Why do my sRGB exports from Lightroom look different from RAW files shown in the program even though my monitor can only show sRGB?
2
What could cause pink spots on my RAW photos?
2
Why are my RAW format photos pink?
1
Why do we even need RAW-specific editing software?
6
What might cause horizontal artifacts in Lightroom after import?
6
Why does Darktable show D5300 RAW (.NEF) in pink in darkroom?
1
Why does the chart for my Canon 77D show more photos saved with RAW + JPEG than it does for RAW alone?
3
Why do I get noisy results when converting from raw to jpeg?