How can I avoid a blue sheen on red objects?

I have taken a few images of (Very) red objects recently, under both flash and natural light separately, and seem to be getting a subtle, but annoying blue sheen, which is not apparent to the eye.

This was taken under flash (single Nikon SB-910) 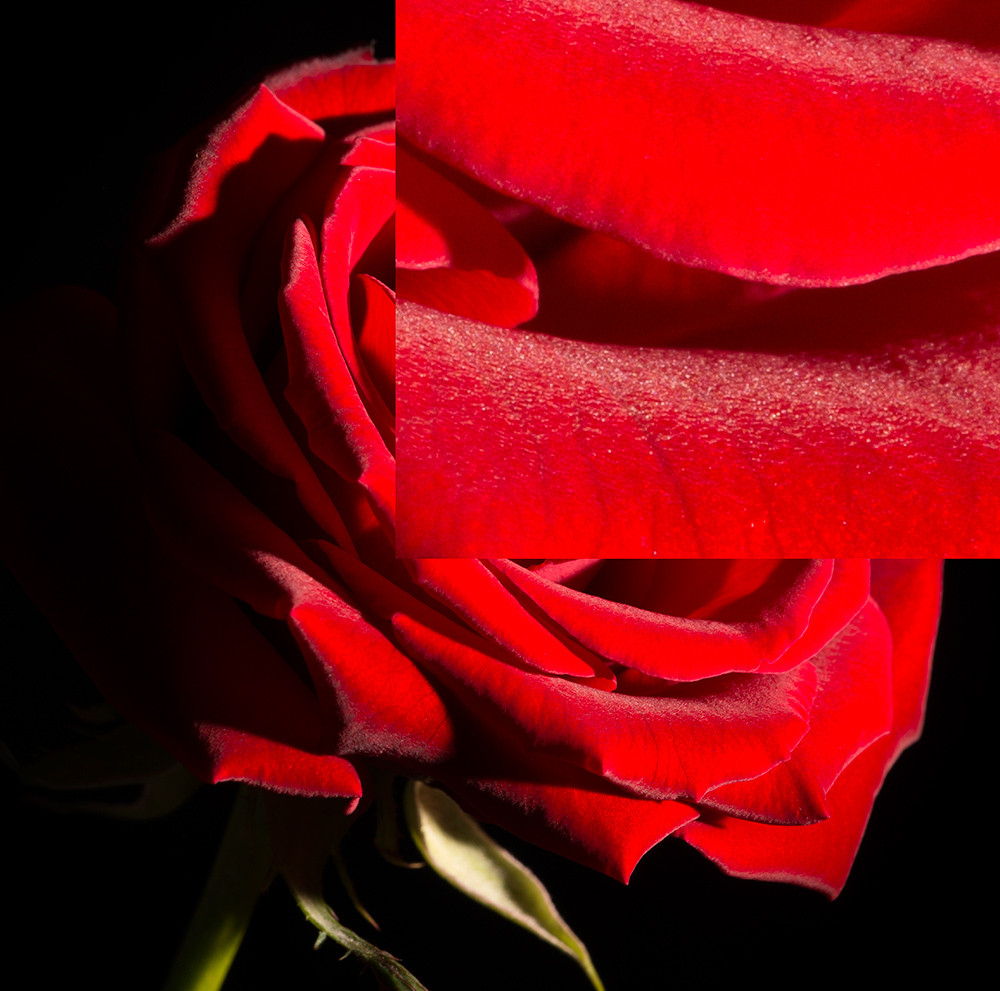 This was taken outside on a sunny day (no flash) - I assume here i am experiencing the sky blue reflecting? 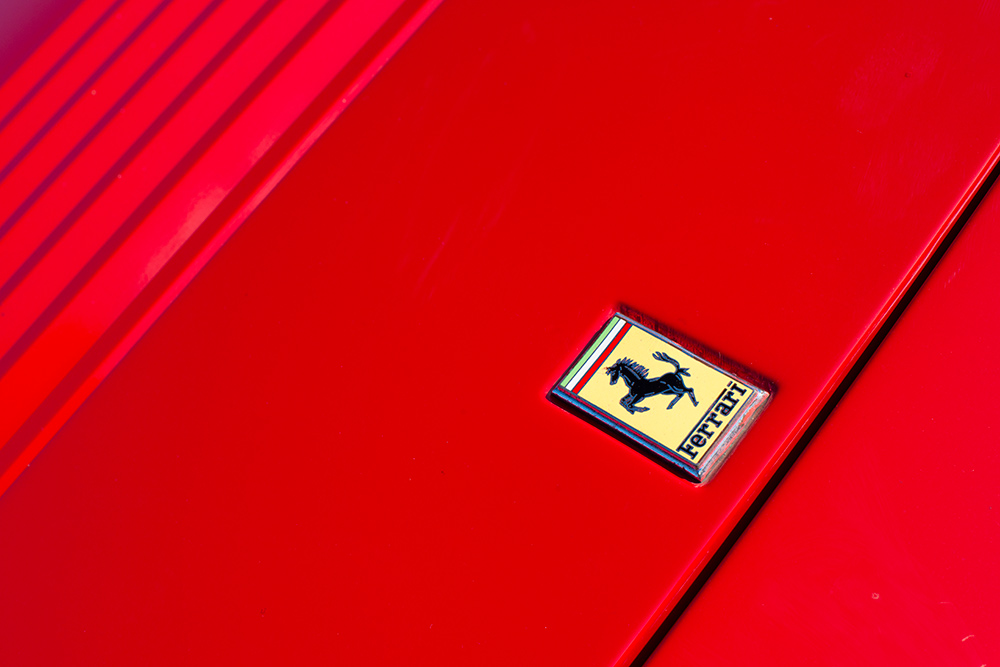 Also, when you photograph something that is basically the same color your camera auto WB will tend to be wrong (actually, I've used a picture that is very similar to your rose picture to intentionally make my camera select the wrong WB in a blog post I wrote a while ago)

I don't have Photoshop on this computer so I used Paint.net that is free and also somewhat underpowered compered to Photoshop or even GIMP.

In the first image it's easy because there isn't really any "real" blue there so you can drop the entire blue channel without hurting the image, for example: 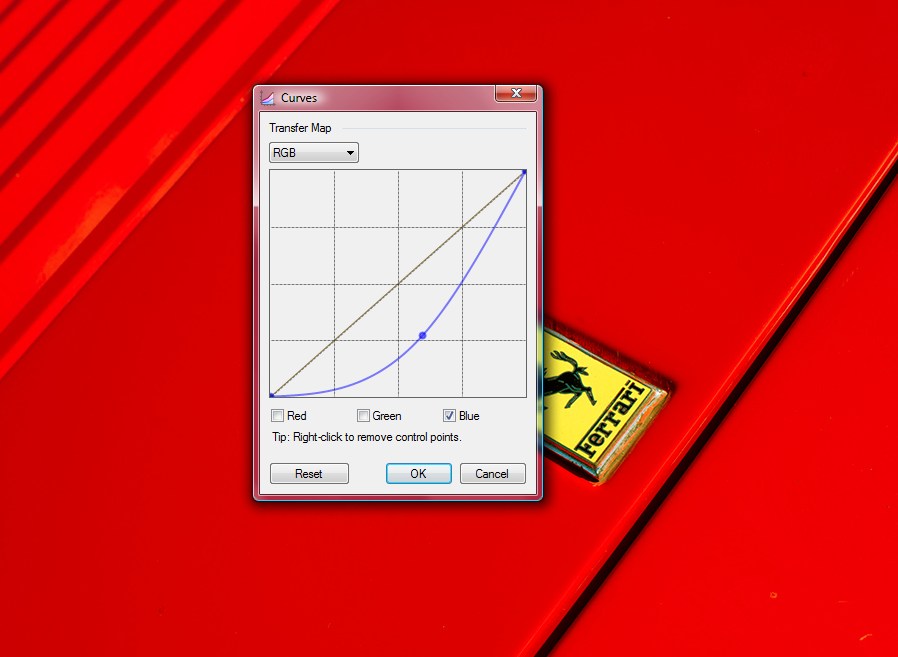 You probably should mask off the Ferrari logo so you don't change it's colors.

For the second image it was a little more difficult because if I just drop the blue channel the white glare on the flower will become yellow.

So, I've duplicated the layer, converted to grayscale, used levels to leave only the white glare in the image and used it to create a selection (using the magic wand in global mode) for the original image - I've then used curves to lower the blue channel and I've got this: 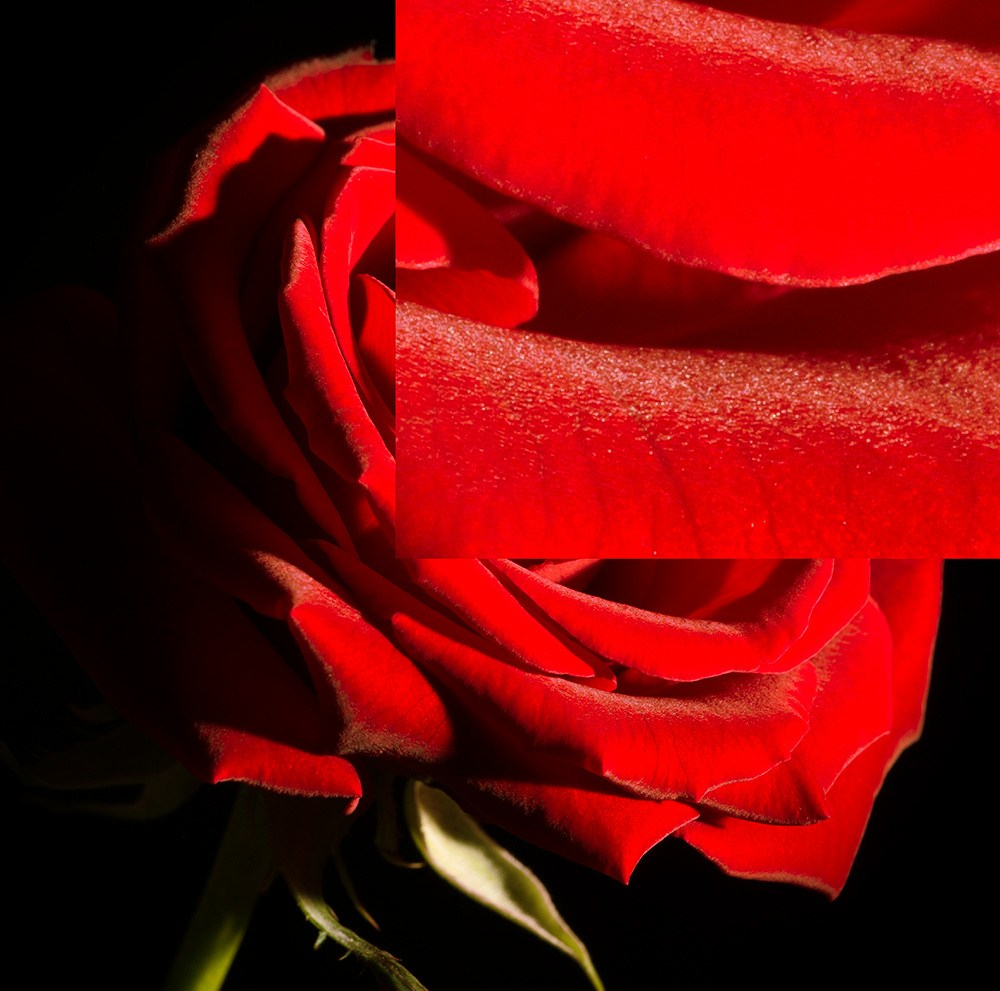 There's still an hint of blue there but much less than the original image and it's not bad for about a minute of work with a program that doesn't even has proper making support (I could have done better with more time, the masking was a little off).

There can be a few reasons for that.

Obvious one, as far as I see, is that you may overexpose red channel. Yes - you can overexpose only a single channel, it's a common mistake, and in 99% of cases happens only to the red colour (it's a "feature" of bayer filter). So for a beginning ensure that you've got correct exposition and your red colour isn't "hugging" the right side of histogram (random example).

Second issue you might stumble upon is incorrect post-processing. As my friend told: Sometimes when messing with sliders in lightroom you can get really nasty artefacts. It's hard to tell if that's the case, but more than often: it is. So think about less aggressive usage of adjustments.

Next thing are reflections. You might not see it with naked eye, but when using flash, or zooming-in pictures to view tiny details you can get rather unexpected results. Like people having "pixels" on their eyes. That's more difficult to fix as you'd need to create a proper environment and minimize unwanted reflections from any direction, including the one where you place the camera.
You might try to correct that in Lightroom (or whichever developing tool you use) by just going to adjustments of individual colours, and then either change the HUE or Saturation. Be very careful though, as this quickly may lead you back to issue two: incorrect post-processing causing artefacts.

As other have mentioned white balance might also be the cause, it's quite easy to test if you have RAWs - just change the WB settings till you get rid of an artefact. Personally seeing photos I wouldn't bet on that, but: who knows. Photographs where main subject is mostly red are very difficult for white balance, and if you really want to make it well you either need to adjust it manually or if you plan a professional work: get a proper Color Meter. These exist for a reason, and you just stumbled upon it ;)

When colours appear differently on camera to the naked eye one possible explanation is the near infra-red. Some cameras IR filters are weak and the blue dye in the Bayer array usually passes most NIR light meaning you can get a violet colour cast.

Another possibility is that the shade of red you're seeing in real life is out of gamut for your camera/processing software or monitor.

If it's happening with varying degree across the frame (as appears to be the case in the top left corner of the Ferarri image) then it could be the result of a polarizing filter, or colour cross-talk on the sensor. This tends to happen in wide angle lenses or when the exit pupil is very close to the sensor plane, light coming from oblique angles can pass through the substrate and excite adjacent pixels.

A more likely cause, however is simply incorrect white balance, the brain is doing a much better job than the camera. You can't rely on the "flash" setting being the right colour temperature for your flash, or even the colour temperature of the flash staying the same between shots. Likewise for daylight, as you have two sources of light, one hard white "main" light, coming straight from the sun's photosphere, and one blue highly diffuse "fill" light, coming from the trillions of particles in the atmosphere that reflect the sunlight.

The highlights in the first image look like something you can photographing certain fabrics and it's a reflective effect due to the surface structure.

Not the answer you're looking for? Browse other questions tagged color color-blue color-red or ask your own question.

31
Why is the blue channel the noisiest?
7
Why are red objects coming out unnaturally in my photographs?
8
How can I fix the color of blue photos using settings from “good” photos?
6
How can I avoid or correct the “inverse Ageratum effect” in digital photography?
13
Why does the red area in this photo look very un-natural?
7
How to avoid blown colours in one channel?
5
How to capture a small red light?
29
What's it called when white objects or white backgrounds become blue in photographs?
56
Why are Red, Green, and Blue the primary colors of light?
0
Timelapse color flickering