I have a Nikon D3000, use it mostly to take pictures of my kids. Going into winter, I'm thinking about getting an external flash but I don't even know where to start. I'm assuming all flashes are not created equal. Right now I have the kit lens and a telephoto lens, and am getting a prime lens for Christmas. The kids will start having recitals, Christmas pageants, etc. so I want something that I can use to take good pics in low light, but I'm not necessarily looking for professional grade at this point.

First, for what you're doing, an external flash may not be what you want. If you're taking a powerful flash to a kid's pageant, they may tell you to turn it off so as to stop bothering everyone else watching the show. Maybe all the parents have them where you are, though, so I don't know. The 85mm f/1.8 prime takes great low light shots of plays; I use it to take shots of plays at my wife's school all the time.

Having said that, I've used the Nikon sb-800 and the sb-900 to shoot events, and shot with a friend's Canon gear and associated flashes (but I don't remember their model numbers). Of that smallish pool of equipment, I found the sb-900 to be, by far, the best flash I've used.

This shot is a combination of 3 and 5: 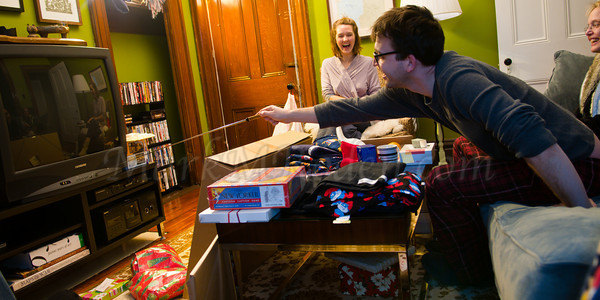 It was taken during Christmas. The flash is on the top of a shelf in the closet (you can see a bit of the output on the top of the door). I just set the flash to remote and the camera to commander mode (check to see if your d3000 can do this, I know that the d200 and d300 can) and left the warming gel in to match the ambient light. Without a flash, this room was just too poorly lit to get anything, so I think that this is the kind of flash behavior you're looking for.

While the controls are not the best designed in the world, Sigma does make some very high powered and capable flashes for every major dSLR make and they're usually priced below a comparable version from the camera maker. I have the Sigma EF-530 DG Super and it's been working very well for me.

Now, ultimately, the best option for you is going to be a flash from Nikon. They're specifically designed for the camera by the company that knows it best, meaning that they aren't trying to "figure it out" on their own. I can't specifically advise on the Nikon front (I shoot Pentax), but you can't really go wrong there. Perhaps the SB-600 hits the basic range you're looking for, it's a mid-level option with decent range, swivel and tilt, and not too badly priced. Cheaper than my Sigma, though not as powerful.

Ok let's just start by saying an SB900 costs more then your camera! 2nd You'r going to have to get a wireless trigger to make a wireless flash work. The D3000 does not have the Nikon CLS system. So what the first guy said doesn't even apply to you. And unless you plan to dish out 400 more for a TTL capable pocket wizard, then you can make out with a wireless flash and trigger for under $100.

That's what I did. I got the cowboy wireless trigger and the Yongnuo flash. Both work flawlessly! The flash is comparable to an SB900 in power output but just does not have the features (which you can't use anyway if you're not using TTL, and in the end will just confuse you).

Overall, if you plan to get a better camera and really plan to do some photo shoots, then you spend the money and get a SB910, but if you just want a good flash that just works then go with the Yongnuo!

For price/features, you really can't beat Sigma's line of flashes. They have many of the features that the pro-level Nikon/Canon strobes have, but for nearly 1/2 the price. Sigma's do have their issues (notably forward compatibility

Regarding recitals, the distance to subject will dictate how effective your flash is. I'd assume most begginer-level strobes won't have enough power to illuminate. I'm no flash expert so I can't begin to advise on what type of power you need, but I do recommend checking out Strobist.com for some great information about flashes, and lighting.

Not the answer you're looking for? Browse other questions tagged equipment-recommendation nikon flash or ask your own question.