What's the difference between vignetting and pinhole?

Sometimes people say that a lens has bad vignetting but it looks very similar to the effect of pinhole (darkened edges).

If someone asked to have a vignetting effect (in PP) and someone else asked for a pinhole effect, what would you do different?

Also, if you look at a photo, can you tell if it was due to pinhole or vignetting?

Is it simply that vignetting happens at open apertures and pin-hole happens in closed apertures? (Thus resulting in quite different shutter speeds)?

EDIT: Great, thanks for your answers guys! But I'd like to add something. If I was to draw a graph of Vignetting versus Aperture (in general terms), would it look like a reversed bell curve? 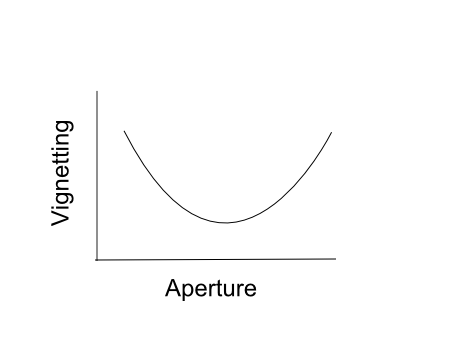 There are multiple causes for the light falloff which we call vignetting. In lenses, the primary causes are:

As you stop down or zoom out, you get to the point where these factors have zero impact inside the area captured by the sensor.

The vignetting associated with pinhole lenses occurs for a different reason: it happens when the size of the aperture approaches the thickness of the aperture material itself. That doesn't happen in normal lenses because: A) the aperture blades are quite thin and B) even the smallest apertures are much bigger than the f/200 and smaller common to pinhole lenses.

(This may be related to Do rounded edges on aperture blades improve image sharpness, and how?, but I can't make any promises on that score.)

It's also really a special case of physical obstruction — rays from too wide of an angle hit the side of the aperture material — but one which occurs in a different case from what we see in typical lenses.

So, for your chart, we'd be looking at a less symmetrical curve, where the effects of the first causes disappear at smaller apertures used in normal lenses, and the pinhole cause doesn't appear until much later. (I've entirely made up the numbers and the particular curve here; they're for illustration, and don't take into account any actual lens or aperture material.) 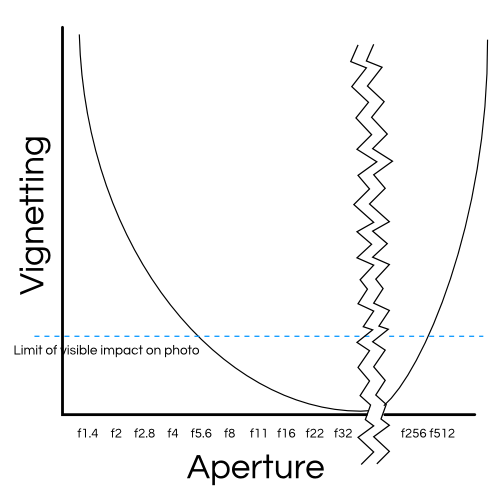 Every lens, whether made of glass or a tiny hole in card, creates an image circle, which fades to black towards the edges. When you close down the aperture in lens based cameras, the soft edge of the image circle hardens, matching the increased depth of field (it's basically an out-of-focus image of the physical edge of the lens). Hence, with wider apertures, vignetting is more common when you take photographs with lens-based cameras.

With a pinhole camera, the image circle is theoretically infinite in size, as light passes through the hole at all angles. However in practice, there is a physical thickness to the medium in which the hole is made, which results in light fall-off towards the edges as the effective size of the hole decreases with the greater angle of incidence.

The net result is that the type of vignetting you see from pinhole cameras is of a different character to that from lens based cameras. Vignetting is often added in post-production for aesthetic reasons (it's not always seen as a bad thing) and how it is applied will determine whether the image looks like it was taken with a pinhole camera.

With lenses, the rear element is of a similar size to the sensor (compared with a pinhole) so the light falloff is not a big factor. Vignetting can occur due to obstructions like lens hoods or by the lens elements themselves ( as the Wikipedia article states

Rear elements are shaded by elements in front of them, which reduces the effective lens opening for off-axis incident light

As far as your question - can you tell the difference - I would imagine lens vignetting is typically a subtle effect mainly occuring in the corners, whereas the pinhole effect would be more noticeable even towards the center of the image. So to me in PP if you wanted to do a "pinhole" effect you'd make it more pronounced with perhaps a sharper transition.

Vignetting is vignetting. And vignetting can occur with a pinhole camera for the same reason it happens with a fancy lens. When thickness of the material is close to the pinhole diameter the rays are cut off in the Field of View.

Not the answer you're looking for? Browse other questions tagged lens post-processing vignetting pinhole-cameras or ask your own question.

11
What does IQ mean?
18
Do rounded edges on aperture blades improve image sharpness, and how?
6
Why are large zoom ratio constant apertures lenses not generally available?