What is the "Rule of 600" in astrophotography?

This question mentions the "Rule of 600" for avoiding star-trails in astrophotography.

Stars move. Like with any other movement, what we care about is how much they move on the sensor during exposure: A movement that occurs only within a single pixel is not a movement the sensor can capture, i.e. the movement appears frozen.

The derivation is fairly simple:

By the 600 rule, those 8.5 pixels represent the maximum acceptable movement blur before star points turn into star trails. (That's what the rule says. Whether an 8-pixel smear is acceptable for a particular purpose is a different discussion.)

If we plug a 400mm lens into the same formulas, we get max 1.5 seconds exposure time and a 7.3 pixels movement during the exposure. So it's not an exact rule - the blur is slightly different for different focal lengths - but as a rule of thumb it's pretty close.

In this case a "rule of 400" for the crop sensor camera would give the same blur as the "rule of 600" for the full frame example.

I suggest using "rule of 600" (or a stricter version with a smaller numerator) with the equivalent rather than the actual focal length, that way the rule gives the same results for smaller sensors. (E.g. 16mm on a 1.5x crop sensor is equivalent to 24mm on a full frame; use the "24mm equivalent" rather than the "16mm actual" focal length to calculate the max exposure time.)

Different stars move at different speeds relative to the Earth. The fastest movement is along the celestial equator, while the Pole star (Polaris for the Northern hemisphere) at the celestial pole hardly moves at all.

The effect can be seen in this picture from wikimedia commons: Polaris appears as a fixed point in the middle while other stars revolve around it, and the length of the star trails increase with their distance from Polaris. 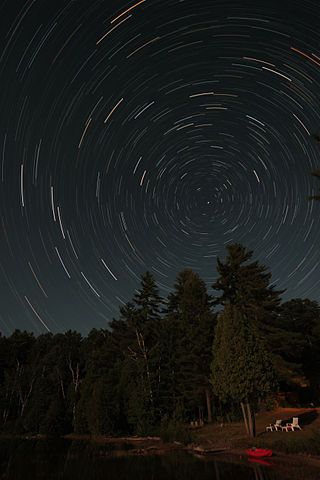 The calculation above is for the worst-case scenario, when the picture includes stars that move along the celestial equator.

I guess the takeaway message is that the 600 in the "rule of 600" depends on camera resolution, sensor size, where in the sky you point the camera, and what you consider acceptable blur.

Use a smaller number if you want less blur.

Of course (like any motion blur) you will never eliminate star trails- you merely reduce the trail to an acceptable level for a given enlargement. The only perfect solution is a "perfectly aligned tracking equatorial mount" and there ain't no such thing.

The etiology is difficult if not impossible- it's sort of like 'Handhold no slower than 1/focal-length shutter speed'- a rule of thumb or common wisdom that works in many but not all cases.

An interesting and more general discussion of star trails can be found here: http://blog.starcircleacademy.com/startrails/

This rule applies to the shutter speed you should use when taking photographs of the night sky. The rule is as follows:

As far as I can tell there is no record of who came up with the rule or how it was derived, however it would most likely have been based on trial and error using 35mm film, with the inherently lower resolution (grain) and lower tolerance (frame size) than today's cameras, and rounded up (or down) to a nice round 600.

As for application, care should be taken. Modern digital sensors are much sharper than 35mm film, meaning there is less tolerance when it comes to motion blur. Additionally, most digital cameras these days have smaller sensors than the 36mm x 24mm of 35mm film, meaning there is EVEN LESS tolerance, so it should probably be adjusted to be more like a 400 rule when using these cropped-sensor cameras (that is, if you think 600 is still a valid value for full frame cameras, which is arguable). Conversely, if using medium format cameras, a larger number could be used.

Although several of these answers dance around it, none of them point out that the "Rule of 600/500" was derived based on the assumption of a standard display size and viewing distance. That is: 8x10 inch display size viewed at 10-12 inches by a person with 20/20 vision.

The "Rule of 600" is a bit more generous and is based upon a CoC of around 0.050mm for a FF camera. Some of the wider allowance can probably be based on the difficulty of focusing precisely on stars with the film cameras in use at the time the rule was derived - Split prisms are useless for assisting with focusing on a point rather than focusing on a line so many astrophotos of the day shot with 35mm cameras were focused using the infinity mark on the lens' focus scale (or the hard stop at infinity than many lenses had at the time) and thus the stars in the resulting image were even larger blur circles than would have been the case with points properly focused.

It's worthwhile to calculate more precisely for how long you can expose before you get star trails. If you use a rule of thumb and/or trial and error methods until you get things right, you'll likely underestimate the maximum exposure time which ultimately leads to more noise as you'll go about producing the final image in a less than optimal way.

It is not difficult to calculate the maximum exposure time if you know beforehand what objects in the sky you want to photograph. The object is at a certain angle relative to the Earth's rotational axis, which is given by 90 degrees minus the so-called declination of the object. E.g. if the object of interest is the Andromeda galaxy, then [you can find here][1] that the declination is 41° 16′ 9″ therefore the angle w.r.t. the Earth's rotational axis is 48.731 degrees. If the field of view is large, you may not want star trails to appear to the South of Andromeda, so you then need to consider a larger angle. Suppose that you have decided that the angle is going to be and let's call this angle alpha.

We then need to know what the angular velocity of an object at angle alpha relative to the Earth's rotational axis is. If we project celestial objects on the unit sphere then the distance to the rotational axis is sin(alpha). The sphere rotates about its axis once every sidereal day which is 23 hours 56 minutes 4.01 seconds(this is slightly less than 24 hours because the Earth revolves around the Sun, so the Earth must revolve a bit more around its axis for the Sun to be in the same spot). This means that the velocity of the object is:

The camera sensor is at the center of the sphere so it is at a distance of 1 to the points on the sphere, this makes the velocity on the surface of the sphere also the relevant angular velocity in radians per second.

The angular resolution of the picture is given by the pixel size divided by the focal length. The pixel size can be calculated by taking the the square root of the ratio between the sensor size and the number of pixels. A typical crop sensor may have a pixel size of 4.2 micrometers. If the focal length is 50 mm, then the limiting angular resolution due to the finite pixel size will thus be 8.4*10^(-5) radians. Dividing this by the angular speed omega gives you the maximum exposure time above which star trails become visible in the ideal case. In general, for pixels of size s and focal length f, this is thus given by:

6
How to avoid star-trails
0
Milky way photography without startrails
1
What speed to shoot stars at?
1
The 500 rule - astrophotography
23
Is composition after capture against any traditional photography rules?
36
How do I capture the milky way?
33
Why am I unable to capture as many stars as I can see with my eyes with my new DSLR?
14
Capturing the Milky Way: what did I do wrong?
19
Why do some lenses focus past infinity?
22
How do the stars in this photo appear without star trails even at a long shutter speed?
See more linked questions

1
What are the ideal settings to shoot Star Trails with a Nikon D90?
0
Astrophotography exposure setting for noise reduction
5
How can those star-trails be non-circular?
1
Is Star trail photography possible on smartphone cameras
16
Why are the star trails in Richard Angle's photos of a SpaceX launch and landing so non-uniform?
1
Do you have to account for crop factor in the NPF rule?
2
Equivalent of the 500 rule for working out how many frames you can take with a given focal length before resetting/moving a manual mount?