My Canon 450D can (or at least has) survived light rain, condensation in the cold and a little icing up overnight during astrophotography...

The various different levels of camera above the Rebel/XXXD range talk about improved weather sealing, and of course the L lenses do too... but I've never seen an indication of exactly "how sealed" they are. People talk about the 1D/5D having better sealing than the 7D which is in turn better than XXD series, and that the Rebel/XXXD series just don't have it (though obviously the plastic shell offers some basic protection). But what's the difference?

I'm referring to Canon models only due to familiarity with them, I'm pretty sure this all applies to any brand offering weather sealing.

There's a system called IP Ratings which define weather sealing against dust/moisture. Do weather-sealed DSLRs meet any of those criteria? By which I mean, does the manufacturer make IP rating claims? (It's all good and well to say "I once splashed water on my ... and it's fine" but that's no better than me getting ice/condensation all over my 450D and 10-22 and being lucky it still works fine).

Or is there some other specification which the different models meet? Ideally I'm after objective claims that can be made to differentiate between the levels of weather sealing (e.g. "safe in any level of rain", or "safe to submerse in water", or "safe on the beach/in a dust storm/...").

I'm not upgrading my camera body just yet, but plan to in a year or two and want to know if there's one that's going to be safer to use in some more extreme conditions, and whether I'll have a warranty after taking it there (;

I'm not aware of any specific claims for immersion, rain or dust resistance made for any SLRs. I've not read every warranty, but if there was even one that covered water damage I'd be surprised.

The closest thing I know of to objective data are renderings of weather sealing locations (courtesy dpreview.com): 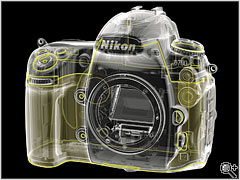 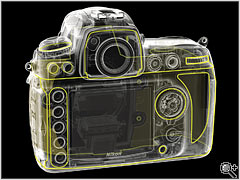 As an aside, an interesting (though apocryphal) trick from the first Gulf War to keep dust off of cameras and film was to store them immersed them in water - the catch being you needed an a camera like the Nikonos, which is rated to something like 60m depth.

Not the answer you're looking for? Browse other questions tagged equipment-recommendation dslr weather body or ask your own question.

17
How weather resistant is the Canon EOS 7D?
9
How can I decide between the 70-300mm vs. 100-400mm Canon L lenses?
1
How to better protect gear on snowy / rainy weather
0
weather sealing.. and dusty/sandy environments
2
Is the Pentax DA 35mm F2.4 AL a good choice for street and night photography?
14
What's the biggest difference between these two photos of large animals?