How to get "rays" in night photos?

In this night picture, the lamp has characteristic "rays". 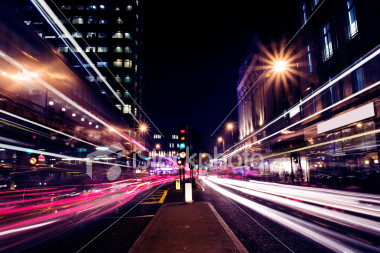 How is it possible to get similar effect? Is it related to aperture, or shutter speed, or lens type?

Shoot with a small aperture, f22 or like. It is called diffraction.

There is a detailed answer Here

And here are some sample photos taken with Sony Alpha A35 and an old Carl Zeiss Sonnar 135mm f/3.5 lens. I choose this lens to experiment because it has six blades and has a nice octagonal aperture at f/22. And also being a lens from cold war era, it is much more prone to flare than modern lenses.

A ISO400 f/3.5 1/5sec You can see all lights are more or less regular blobs. Flare is also abundant. 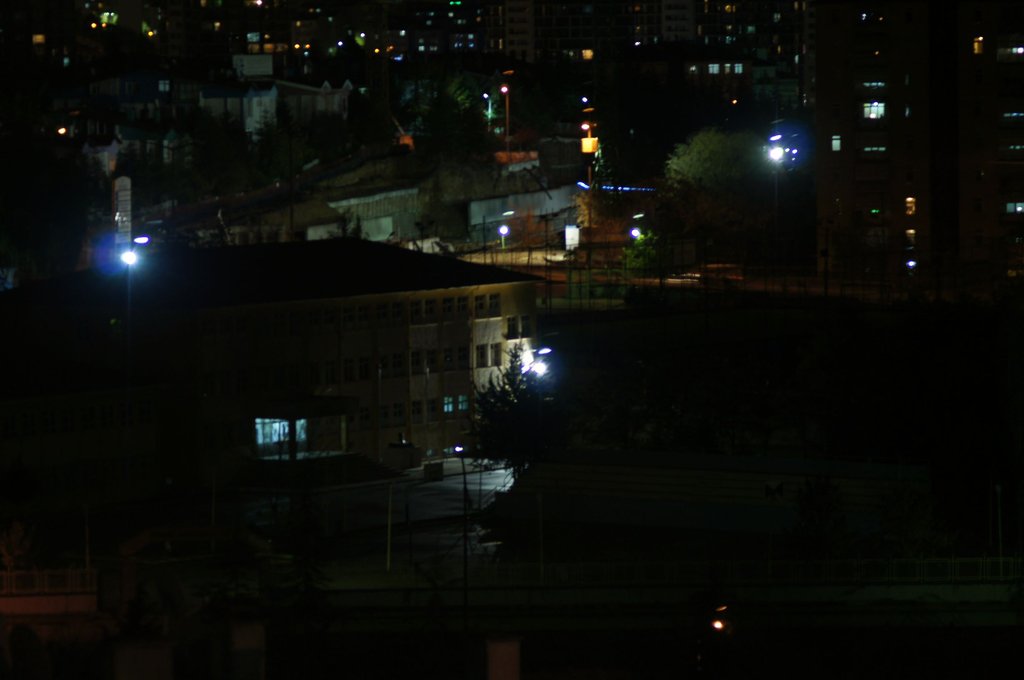 B ISO400 f/8 1.00sec Star effect can be distinguished. Flare is lessened but it still is there. 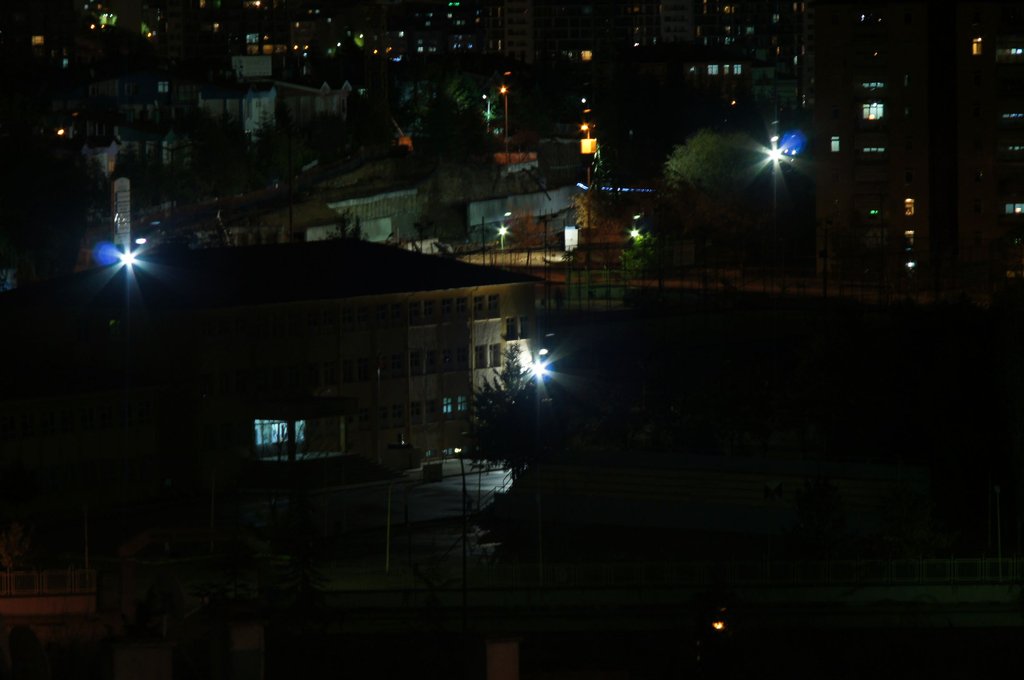 C ISO400 f/22 2.00sec Here we have full stars. Even the point lights on apartment windows show characteristic six pointed star. Since there is much less light coming into the lens, flare is reduced to almost nothing. 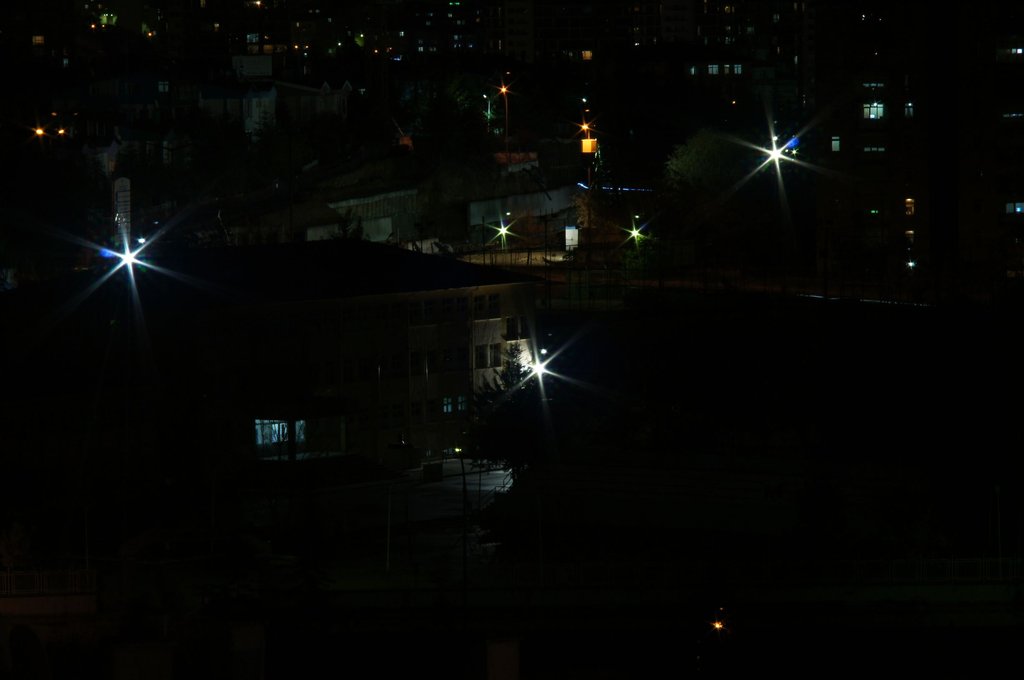 D ISO400 f/22 15.00sec I have included this image to show the effect of exposure time on diffraction. Only difference from image C is exposure time. As you can see arms of the stars lenghtened a bit but thickness of the arms are not affected as much. And also flare is back with an interesting checkered pattern. I suspect this is caused by the reflection of light from the DSLR sensor, back to lens. 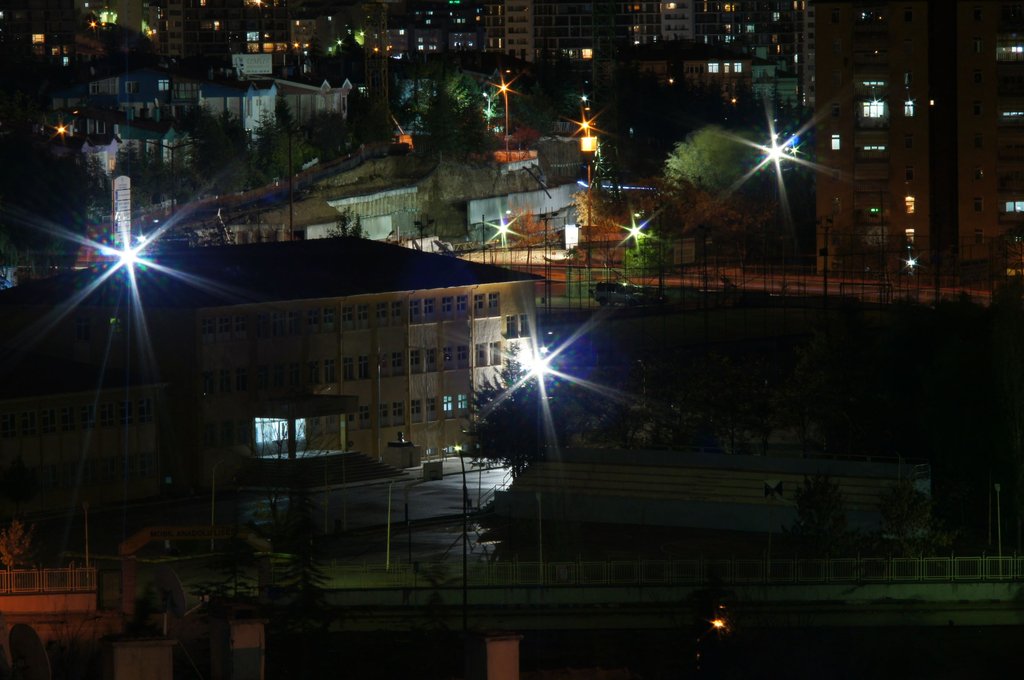 This can be achieved with a filter in front of the lens that has tiny aligned scratches in it. The individual scratches or lines are tiny and way out of focus, so you only see the light diffracted by them. The lines or scratches are also rather subtle, so most of the light still goes straight thru normally. Bright lights have strong enough diffractions around them that they are visible relative to the light level of the rest of the picture, as is the case with the bright light in this case. Actually all the light in the picture got the same treatment, but most was dim enough that the diffractions were not visible against the other content.

There are commercially available filters for this, I think called "star" filters, but I have never used one. You can experiment with this yourself quite simply by putting a layer of nylon stocking immediately over the front of the lens. That will yield a stronger effect than exhibited in this picture, and you will get two star points for every different orientation of thread in the stocking. This picture was probably taken with a professional filter for that purpose, since the star has 14 points, which means 7 separate orientations of lines or scratches. They are also quite even, which is again something difficult to manage on your own. Expriment with the nylon stocking and you will see what I mean.

An easy way is to handle it in post production. I saw some Topaz demo about it : http://www.topazlabs.com/stareffects/

I'm not affiliated with them in any way, but have good experience with products bought from them.

Lens flares are created by light hitting a lens and, rather than passing straight through, refracting minutely to make it look like the light is coming from somewhere it is not coming from. (Wikipedia has a good article on this: http://en.wikipedia.org/wiki/Lens_flare)

You need two things to create that shot. One is a lens that has imperfections in it, so that it will refract that light (often these lenses are consider to be poor quality, but they have their uses.) And then you need to be able to set a long exposure so that the light source can be over exposed. That tends to lead to lens flares. Though sometimes some amount of experimentation is required.

Not the answer you're looking for? Browse other questions tagged night reverse-engineering effect or ask your own question.

58
Why do light sources appear as stars sometimes?
3
How can you photograph backlit scenes without getting lens reflections/flare?

5
What is this effect called and how can I post process my photos to get this effect?
5
Long exposures without turning night into day
21
How to I get the Instagram "Lux" effect without using Instagram?
2
Suggestions for night photography with city lights?
2
How do I achieve deep blue light night during the day effect?
2
Night Auto Race photography
6
How do you set up a photo of a glowing tent in the dark?
2
How do you capture wildlife at night in near pitch black darkness?
1
How was this nightclub photo taken/edited?