How to shoot whales?

I'm going whale watching with a Pentax K5, I'm thinking of using a Pentax 60-250mm f/4 ED DA* SDM lens only as I don't want to change lenses while out at sea. Do you have any suggestions for shooting settings, lenses, etc?

Except in low light at end/beginning of day it's not too demanding.

Lens sounds good.
Most whales are bigger than most birds (you'd hope) so 250mm is big enough as long as regulations and whale availability allow close approach.

Whales move slower than birds so for most purposes the setup is not too critical and you can use smaller aperture to get good depth of field. Fast action can happen at the transition points - broaching / diving/ spouting so be prepared to take multiple frames per second at these points.

Have some fast access protection to lens and camera can be covered and uncovered instantly. I had a lens and camera both destroyed during a whale & dolphin spotting trip - although I'm pretty sure that the captain "being funny" played a part.

Dolphins may happen - more speed than whales and if they plane at bow or jump in and out of surface around hull at speed them somewhat higher shutter speed is useful.

While looking for whales, do keep an eye on the birds.
If dolphins then quite probably fish, and so also diving birds. Some of these assume the most amazing tucked in shapes just before impact. They are so fast that the eye does not discern what is happening and high shutter speed and good judgement is necessary to catch them just before and transiting surface at high speed.

Photo below is a Gannet at 1/750s. Normally large fluffyish birds, they turn into something approaching a javelin as they enter the water. This is about 15% of a 12 Mp frame. While the photo quality leaves much to be desired it's the best I've ever seen subject-wise of a tucked in Gannet just before water entry. (There are many many prettier ones on web, but none so spear-like). If you were specifically looking for something like this you may well do better. (That trip we say 1 Whale, maybe 100 Dolphins, countless Gannets. 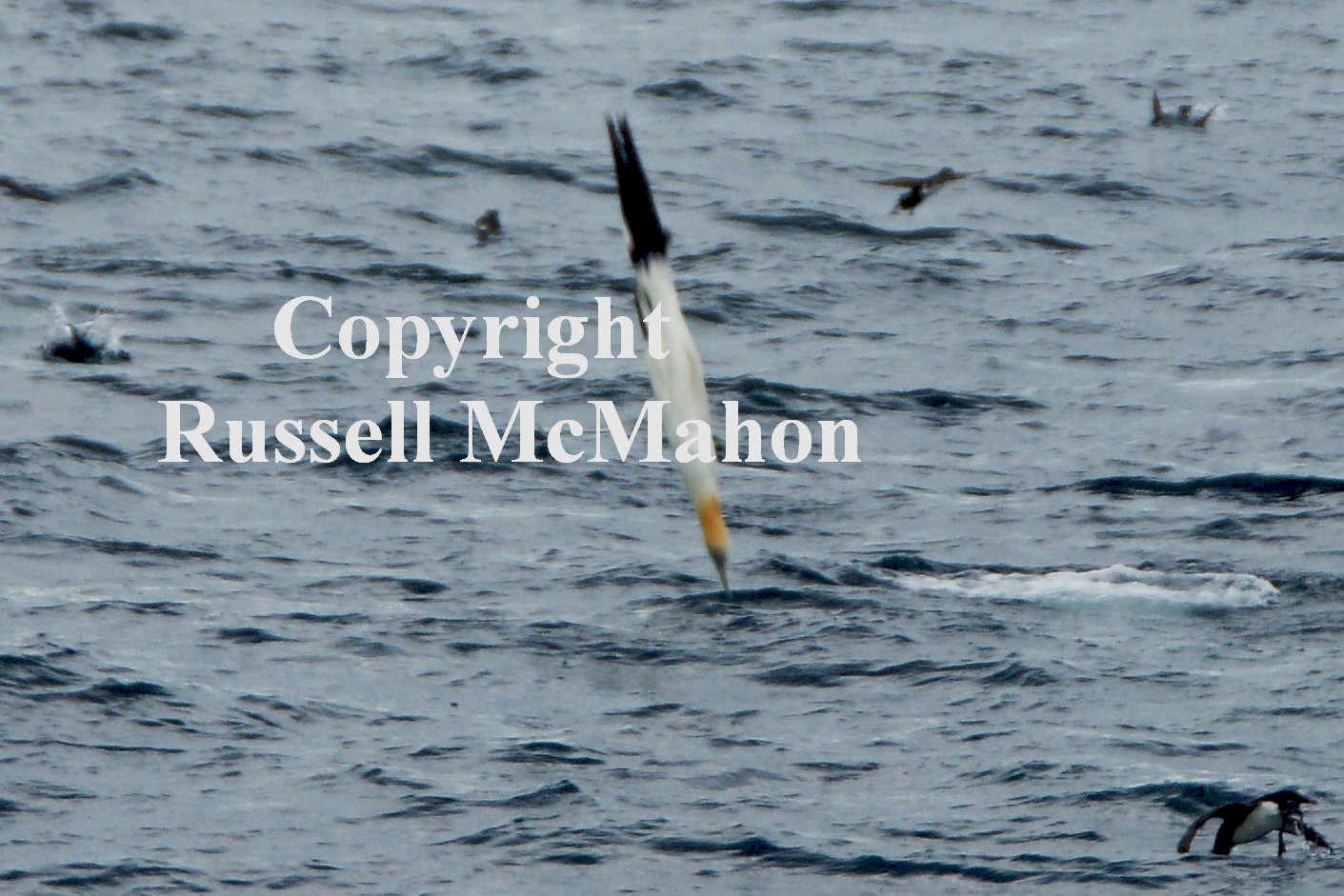 Somewhat pointed reference to Imgur removed. They have clarified their copyright position and have said in writing that their blanket ownership of rights to material posted on their public system does not extend to the Stack Exchange system. This clarification on their part is most welcome.

Having your camera ready is essential in any action situation. Whales are generally slower than Wildebeest, but it's still a shame to miss the moment as a broaching whale arcs over and kersplashes back into the water with great spectacle. I've only seen this from a distance (shore watching, Kaikoura) where APSC + 500mm is not really enough - but it applies in many situations. [My sole sea spotted whale was very sedentary].

Most DSLRs will drop back into standby after a presettable period. I usually operate mine at minimum delay (typically 1 minute) to conserve battery life. In situations when action may spring on you at any moment (especially if it's a Leopard :-) ) then setting standby timeout to as long as possible may be useful. Tapping the shutter button (half pressure) keeps the camera awake when action is happening.

Wakeup-time makes a difference. Sony do not seem to have realised that 0.1 second power on is a very useful feature and my A77 crawls into life over what feels like one second+. Less probably. My older Minoltas were faster. When lifting the camera from a bag or from slung position I tap the shutter button as the very first action so that the camera wiill be alive by the time I am ready for it.

An obvious but useful thing to do is to take the first photo that you can of a new event absolutely as soon as you can, and THEN think about what you want to do. I call this my "contingency shot" (tip of hat to Neil Armstrong & co) and in enough cases to make it worthwhile, the first photo in an action sequence turns out the to be the best. Sometimes the 'contingency shot' is the only photo I get. Do let the camera focus before actually taking the shot though.

Funny enough, I did just that last February with a K5...

Use TAv mode and set a high shutter speed with a good aperture (at least f/8) for depth of field, let the camera pick ISO. Then put the camera in high speed mode and go for the rapid sequential shots. Don't chimp, you might miss a shot, like I did with a whale breach that was maybe 30 feet behind our boat. You either got it or you didn't, looking won't change that.

I think you might find longer reach more useful. I was out with a Sigma 120-400mm and a few times the far end was used. Still, if they're plentiful, you'll get your chances easily with the 250mm. Probably depends on the whale, we were looking at humpbacks off the coast of Maui.

Not the answer you're looking for? Browse other questions tagged wildlife nature boat-cruise or ask your own question.

7
What would be useful to know or read before shooting a Safari?
3
What advice would you give for taking photos on a boat cruise at night?
7
Best easy-to-carry-around Canon (or ANY OTHER) camera plus lenses for bird /wildlife/landscape photography (hobby)?
4
Should I prefer versatility or a longer focal length for wildlife photography?
4
How can an amateur wildlife photographer get good photos of urban foxes?
2
Recommended way to do photomicography outdoors?
3
Layman's guide to making distant things clearer - add on lenses/monoculars for mobile phones
9
Sigma 150-600mm vs 300mm prime with extender?
0
Thoughts on using Sigma 18-250mm F3.5-6.3 DC MACRO OS HSM for Macro photography