What sort of adjustments should be applied to bring out the colors in this photograph of the aurora?

I recently had the opportunity to photograph the Aurora Borealis and while a limited number of my photographs where quite striking with almost no adjustments, a lot of them look like the following: 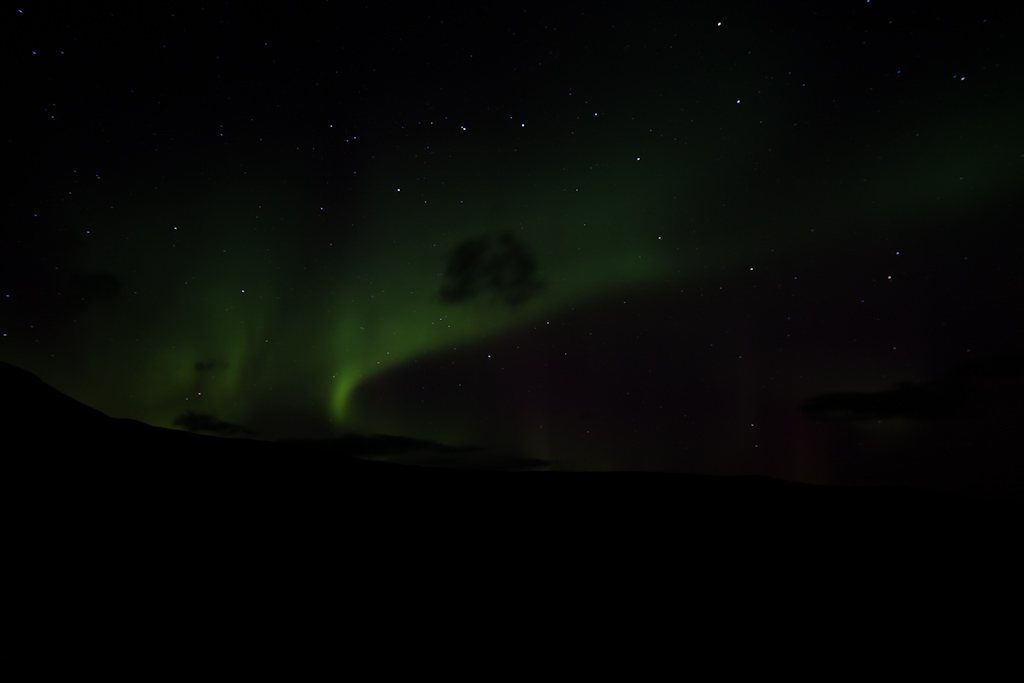 In other-words, they are dark and while you can tell what it is, they are a bit too dark to really enjoy properly. What sort of adjustments, if any, can I make in Lightroom 3 to bring out the colors a bit more?

Note: Right now I have the latest version of Lightroom 3 and I've been holidng off on upgrading to Lightroom 4; however, if there are pressing reasons to upgrade I will likely do so.

Basically, you need to do some post processing on this image.

From the original, the first step I performed was to make the darkest part black and the lightest white. That alone made a sizeable diffefence since your original lightest spot was only (.37, .34, .38). In other words, you were wasting over 60% of the dynamic range. 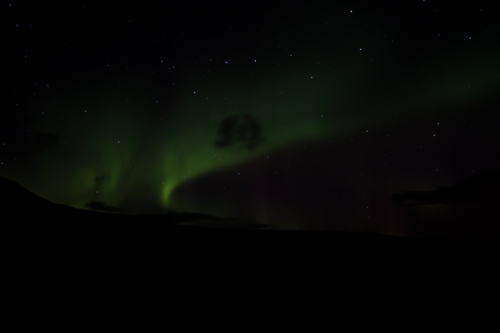 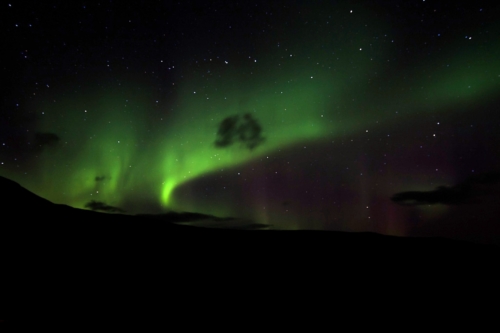 Next I applied some non-linear brightness increases. The picture below is with what my software calls a "log ratio" of 1 and a brighten value of .2.

The log ratio is a logarithmic mapping of the original assumed linear brightness values. The problem with logarithmic mapping is that there is no good thing to do with full black, since that would result in negative inifinity. One way or another, you have to specify the black offset in log space, which then gets remapped to black in the output image. My log ratio parameter does this by specifying the ratio of how much difference a small increment at the low end of the range maps to compared to the same small increment at the high end of the range. The log ratio parameter is the log2 of that ratio. A log ratio adjustment of 1 therefore causes a curve with twice the slope at the black end as the white end. A log ratio of around 4 is more normal, which results in a 16:1 ratio of slopes between the black and white ends. I don't know if you followed all this math, but basically this is a rather mild logarithmic sloshing of the values that makes the image brighter overall while preserving black and white.

The brighten factor of .2 applies a different non-linear mapping that also preserves black and white, but effects the dark areas more and the bright areas less than the log ratio parameter does.

Anyway, here is the result: 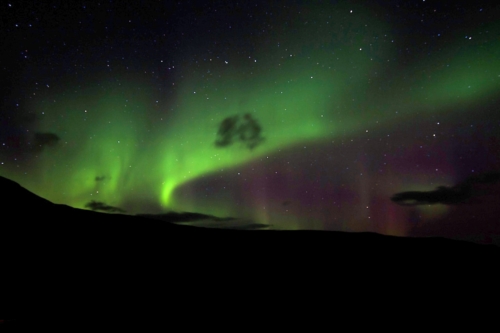 I stopped here because I don't know what the original scene looked like, and all the amplification of small changes at the dark end was starting to cause some splotchiness. This is a great example of why you don't want to take JPG images in the camera. Since they are already limited to the same 256 values per color you are ultimately going to have in the final image, there is no way to apply different mappings without losing information. If you start with the original raw 12 or 14 bit sensor values, you have a lot more detail on the brightness scale so that there is still 1/256 changes left after doing all the corrections.

Well, given that all I have to work with is a JPEG, the results are not perfect. If you have the original RAW, you should be able to do what I've done, and more (particularly in the deep shadows).

I imported your photo into Lightroom 4.2, and made the following adjustments: 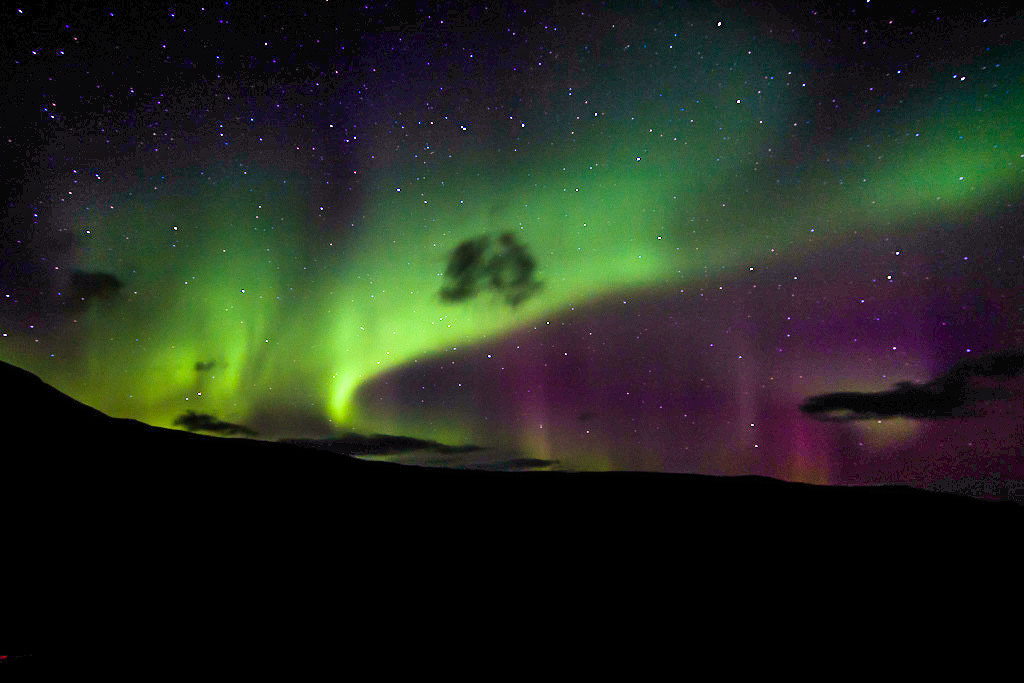 Now, a couple things about my adjustments. First, the Shadows and Blacks were pushed to maximum. That changed things a bit, but not as much as I expected (particularly the blacks). I'm assuming that is because I was working with an RGB image rather than a RAW image. You might need to use FAR less of a black lift, and possibly less of a shadow lift.

The tweaking of the tone curve is mainly to attenuate how highlights and shadows fall off. The strong -25 Shadows curve should help make the falloff into blackness from the aurora and around the clouds look a bit better, and eliminate potential posterization there. Same goes for the strong +20 Highlights curve. You might be able to (or might need to) tweak those more to get good results with the RAW.

There is quite a bit of noise in the JPEG version I've uploaded, mostly from JPEG compression artifacts showing their fangs due to the extreme exposure lift. You shouldn't get anything like that with a RAW image, and you should be able to push shadows around a hell of a lot more than I did. You might even be able to bring out some detail in the landscape, which probably exists in the RAW but which was completely lost when exported as JPEG.

8
What post processing should be done to my photographs of the aurora borealis to improve colours and impact?

28
What tips and advice do you have for photographing the Aurora Borealis?
6
What sort of color correction and effects are used in this photo?
11
What settings should I use to photograph aurora borealis with a wide angle f/4 lens?
9
What kind of photo effect is this, where colors are a bit washed out, yet retains the crisp detail and the colors are almost pastel?
8
What post processing should be done to my photographs of the aurora borealis to improve colours and impact?
19
Can you photograph the milky way with a full moon out?
1
Any way to bring more detail back in the face in this picture of a man in dim stage lighting?
8
What should I focus on when converting photos to black and white?
3
What adjustments can make this landscape look better?
0
How can I process a highly underexposed image to bring out detail in the shadows without making neon lights too bright?