I am trying to obtain this effect during nightly shots:

The problem that I face is the very strong contrast between the scene (second capture) and the sky (first capture). Photomatix's HDR does not work well, neither photoshop's one.

Manually, the problem is that selecting the sky from the sort exposure shot is tricky, especially between trees. The result is a failed picture where the merging line is very noticeable and unnatural.

What is your favorite workflow to achieve the result that I want?

You could try the "Blend If" sliders in your layer options. This ought to blend in the sky within the trees, but it may block out the stars.

Better control would be to create a mask using Image > Apply Image. Once you have that mask (which will have grey tones, use levels or curves on the mask to increase the contrast of the dark sky areas until the mask is black/white. You should be able to clearly define the sky against the trees. If you are left with "holes" where the stars are, just paint over those with a brush. You might also need to feather the mask a bit.

You may have to tweak the camera settings or raw conversion to get the image brightness to match, but once it does you can just align the layers then paint in the low noise foreground using layer masks.

How about layering the star picture on top of the long exposure picture, and use the blending style "lighter color". If the noise is sometimes brighter, lower the brightness of the star image so only the stars themselves are brighter. 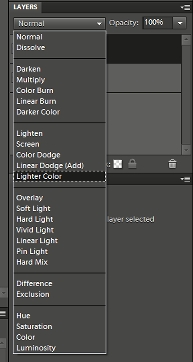 I do a lot of night photography and have found that EasyHDR (http://www.easyhdr.com/) gave good results, though I often had to play with it and use blending options other than "true HDR" or the result was too noisy. I don't find the auto-alignment to be as good as Photomatix but if I'm willing to do that manually, I always get good results from it.

Not the answer you're looking for? Browse other questions tagged photoshop hdr night or ask your own question.

4
RAW HDR with Photomatix dramatically different images in preview vs final
5
Long exposures without turning night into day
4
Is the dynamic range affected by exposure time?
2
Suggestions for night photography with city lights?
0
How does the iPhone 5s manage to take HDR photos at full-frame rate?
2
NIght photography and long exposures with film
2
Why is my HDR image oversaturated and look negative inverse in highlight areas?
7
What are the advantages of additional exposures between outer brackets of an HDR stack?
8
Photostacking - Why does this technique fail for my astrophotos?
0
Why are my photo's not so sharp even when using a tripod?