My wife was recently given a Nikon Coolpix P510 as a birthday present from her parents, primarily so we can take a - I believe the technical term is "****load" - of pictures of our new baby girl (their first granddaughter). She had wanted a DSLR, primarily for the "press the shutter button and the thing will actually take a picture instead of thinking about it until the moment's gone" aspect, but I think this is a good compromise between the cell-phone and cheap pocket cameras we've been used to and the $800 Nikon DSLR her parents have.

We've become especially enamored with the cute poses our daughter gets into when sleeping in her crib (since she's learned to roll over, she's become a side sleeper, and she's also taken to snuggling with her stuffed bunny), and I've taken many pictures of her with just the light from a 60W-equiv 2800K CFL in a floor lamp in the opposite corner for ambient; no fill flash (she is asleep after all).

I'm having some trouble making it look "real", matching the exposure level and color temperature to what we see naturally. I have a basic working knowledge of the concepts of film speed, exposure time and aperture, but pretty much all my practical experience playing with them have been with this camera. My best attempts have been at ISO 1600 film speed equiv, with the shutter between 1/4" and 1/8", and maximum aperture for the zoom level (typically about 4-5). With those settings, my baby looks nice and pink and healthy, and not yellow or grey, but the shots look like they were taken with the overhead lights on (too bright and too white). Lowering the film speed to ISO 800 requires crazy shutter lengths (a second or more) which really gives the anti-shake a workout, and she looks yellowish. Lowering the shutter time past 1/10" underexposes even the ISO 1600 equiv, making the entire shot too grey when compensated. I have 3200 and 6400 equiv settings, but most reviews have said to stay away from them because they're unusably noisy.

What do you think the problem might be? Am I fighting the camera's auto-white-balance (currently just set to "auto")? Am I dancing around the edges of the proper settings (unfortunately there isn't an ISO 1000-1200 setting so I've been trying to compensate for film speed with exposure time)?

EDIT: Here's the best shot light-wise from the session. No, the crib is not broken; the framing of the shot a little wonky cause I was free-handing the camera while squatting down at the level of her crib mattress pointing it through the bars while trying not to wake her; sue me. As stated earlier, the sole light source in the room is one warm white 60W-equiv CFL in a floor lamp to the right and downrange. Except for the shadowing, this shot almost looks like we have the main light fixture of the room turned on, which speaks wonders for the camera's low-light capabilities, and really brings out her face, but overall it's a bit too much for the desired shot: 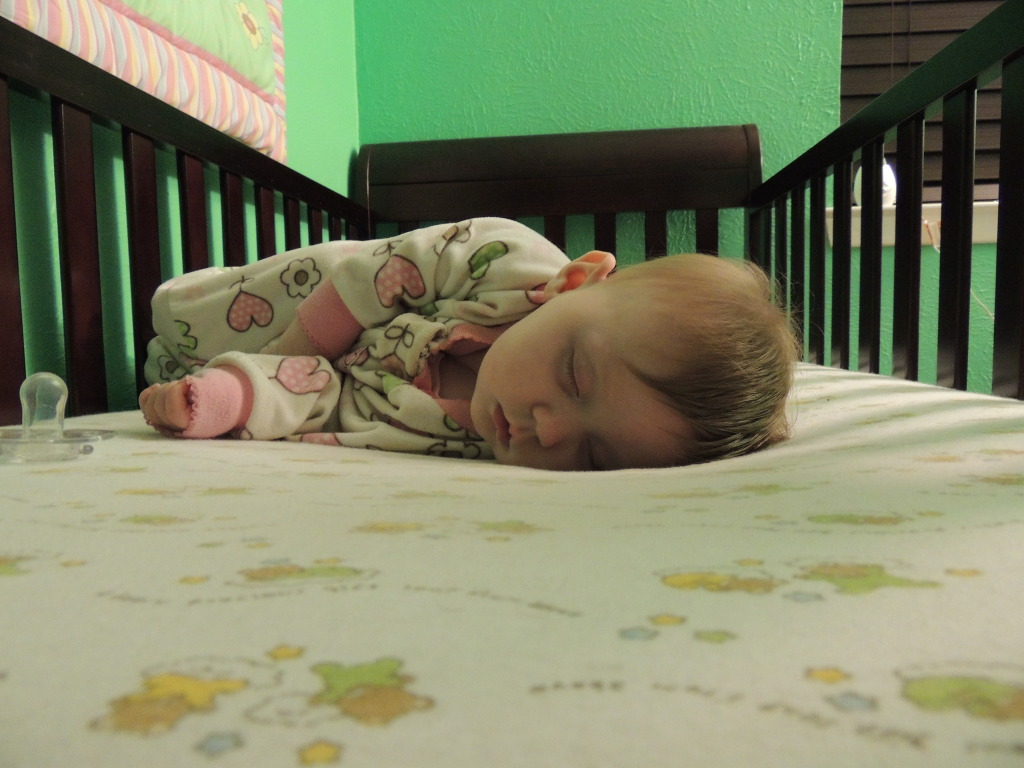 ... but when I lower the shutter time to get a more realistic overall light level, her face goes yellow-gray: 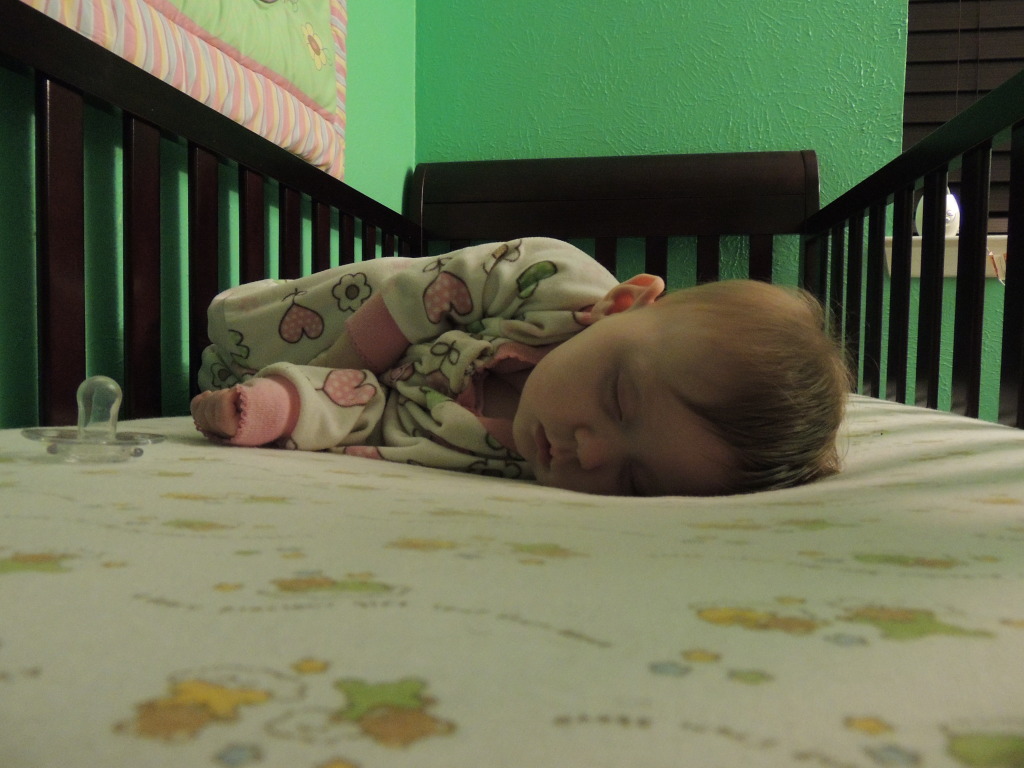 I know that it doesn't help that the light source is opposite her face so I have to rely on indirect scatter, but for a shot like this I have to work with what I'm given.

The 800-speed shots from this session apparently weren't worth uploading so I don't have an example.

There are two main "issues" here. One is white balance and one is exposure.

It sounds like you have a pretty good plan of attack on the exposure front, you have a good grasp on shutter speed, apeture, and ISO. I think you are doing the right things here, the only two other things that would give you more flexibility and image quality would be using a tripod, and providing more off camera lighting. Your camera doesn't have an option to add an additional flash unit, but you can add additional ambient that is the same color temperature as the 60W that you already have.

The second issue is white balance. Your camera does not have an option to choose a RAW format, that would allow you to adjust the white balance later on a computer. So you really need to get the white balance right in camera. This may mean choosing something other than auto white balance. It might also mean removing some lighting pieces to prevent mixture of different temperature light. Mixing florescent, incoming window light, and on camera flash can be very difficult. I would suggest trying to have one good light source, such as large window(turn off room lights) - or close the window completely and have make sure to have enough similar light to expose properly(maybe 2-3 lamps).

Your camera has a Custom White-Balance mode which lets you measure white. An official white-balance card is best but in a case like this nice white-paper is good enough, as long as the paper looks white to your eyes. If you are using one of the presets, use the WB Fine-Tuning function to compensate for the additional cast.

Your problem is not white-balance though, it is the noise-induced color-shift. This occurs when the sensor gets less light which happens when you lower the shutter-speed. Unfortunately boosting the ISO also adds a color-shift because the sensor gain is basically multiplying a low signal.

Therefore what you need is a longer exposure, preferably at a lower ISO. On the P510, I would advise to stay at ISO 400 or less. This is the time to buy yourself a Gorillapod which is a small flexible tripod. It works well with small cameras like yours and can hold on to the bars of the crib. It's great to take photos and videos of yourself playing with your baby too, just place it on top of furniture or a TV.

I worked in the paint dept at home depot for may years and the best way to cut the green hue /walls is to add red In your case add a pink fitted sheet and dress the baby in white. Or use white bumpers.

Not the answer you're looking for? Browse other questions tagged nikon low-light still-life or ask your own question.

36
What are some tips for shooting in low light?
5
How can I improve my exposure in low-light situations?
7
Is video a good alternative to low available light photography?
6
How can I improve portraits when shooting in low light without flash?
2
How can I get long exposure for star photography with a Nikon Coolpix P900?
1
Is there a low light picture quality difference between 50mm 1.8 G and 85mm 1.8 G Nikon?
0
Low light photography using Nikon D90
1
Best settings to focus in low light and low contrast condition
3
Is Nikon D500 a good fit for nature and ambient-lighting portraits and occasional other uses?