Is this sensor ghosting, or something else?

I recently took some shots of a house fly, primarily for use in a simple case study of print sharpness that I posted here. Several of the shots turned out fairly well with flash, however they all seem to have some kind of ghosting going on. I am not really sure if it is actual sensor ghosting, or possibly something else? I'm a bit unsure about what the aberration actually is, as the only part of the scene that appears to be ghosting is the fly itself, and the shape of the "ghost" does not mirror the actual photographed shape...it looks more like the fly moved between the time the shutter opened, the flash fired, and the shutter closed. 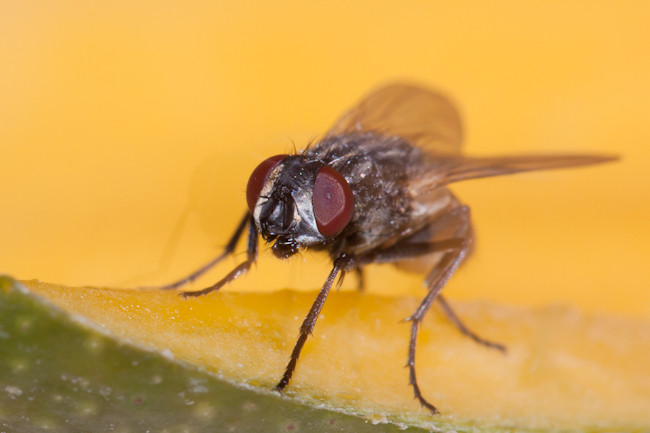 You can see the "ghost" to the left of the fly's head...it looks as though the fly has changed position from the "ghost" position to where it is in the shot.

I checked two things, the exposure length and my flash settings. Exposure length for these ghosted shots was surprisingly long...1/5th of a second through 0.3 seconds. The camera was mounted on a tripod since it was macro, so I didn't really register the exposure times when snapping them. Second, flash sync speed was set to "Auto" in my 450D custom function settings. I'm not exactly what that means (I haven't been able to find any clear documentation on it)...however the alternative setting is 1/200th. Not sure if these factors affect a flash shot much.

I am a bit confused about the nature of the ghosted image. If the fly moved over the duration of the shot, I would have expected the ghost to cover the entire span of motion...however it seems to be frozen at a particular moment. (I can't imagine that was the moment of flash...wouldn't that be the clearly exposed part of the scene?) Anyway...very confusing issue...

The flash may light the scene for only a small portion of the exposure time. If the camera or subject move during that exposure, the ambient light will expose some part of the picture at a lower level than the flash, resulting in a ghost.

I would bet on ghosting/reflection as the ghost image is out of focus in the same areas where the main image (the eyes are sharp and the rest goes gradually out of focus). If it were a shadow, it would be out of focus altogether and if it was fly movement then the white area between the eyes should have drawn bright strips.

You already have the answer but...

When using aperture priority with a Canon speedlite the flash will pop, effectively, instantaneously. The camera will then leave the shutter open to balance out the exposure with some ambient light.

There is a custom function to fix this shutter duration at 1/200s but that is a pointless feature because then you may as well be in manual mode (you have fixed aperture and shutter and are asking the camera to set the exposure with the flash power).

To be honest, it looks like shadow to me. With macro exposures and a pretty slow shutter speed for insects (assuming you're synchronized to the flash, the EXIF is missing from the linked image), any movement would be outright blur and the image is crisp enough to dismiss that. It could be a ghost, but I really don't think so, as even a fly will cast a shadow.

If your flash was strobing, I'd buy into a ghost, but in that event that shadowy spot would look much more like the fly, in other words more ghostly. This just doesn't look like one.

This image looks an awful lot like one in which such "ghosting" was purposefully made: see the shadow-like images beneath the chair. These ghosts have been attributed to internal reflections in the lens when a strong light source is present and the exposure is "long."

Only @Karel offered this solution and, until I saw this second picture, I did not appreciate what he was saying. I have now upvoted his response.

I doubt your image is the result of the fly's motion while the flash is off: that would be a general blur, not a well-defined shadow-like image.

Were you just using on-camera flash?

If so, there's a good chance the lens was so close to the subject that the flash had very little effect because the lens obscured it. That would account for the long exposure time - which in turn means your fly was primarily lit by ambient light. The lack of harsh shadows tends to confirm this.

If that's the case, you're just seeing shadow from whatever ambient light source there was around.

I'm having what seems to be a similar problem. However, in my case, it cannot be due to the exposure time because we're shooting in a dark room, where the only light source is a very high speed flash. Of those suggested here, only the 'internal reflection' suggestion seems to make sense. Any ideas on how this could be prevented?

Not the answer you're looking for? Browse other questions tagged flash aberration ghosting or ask your own question.

5
How to use the safety shift custom function with a flash on a Canon 5D Mark II?
1
The best flash setup and postion for a portraits and groups shots in a low light room?
0
How can I get two Nikon Speedlight flashes perfectly synced in stroboscope mode?
6
Reducing ambient color while preserving sharpness with a flash in concert photos
5
Why does exposure vary subtly between P, A and S modes, when the flash is on?
7
What could cause this visible artifact which seems to a be a glowing inverse of something outside of the frame overlayed on this photograph?
3
Is TTL flash really useful when using off-camera flash?
22
Why is there ghosting when using flash on tripod with image stabilization?
0
Options for a 5-flash 4-group lighting set-up using Canon (compatible) gear