What does it mean when film turns out transparent after being developed?

I had a B/W film turn out transparent after being developed. Does it mean that a) it was never exposed b) it was always overexposed or c) something went wrong during development?

The problem is definitely not overexposure; that renders negatives black.

To work out whether it was underexposure or a development problem, there's a fairly straight-forward indicator: Do you see any edge markings (marked red in the example below)? 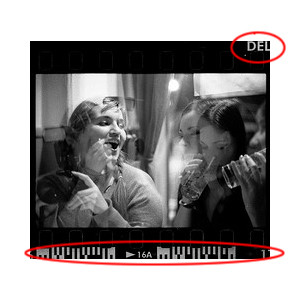 They'll vary from film to film; not all will have barcodes, but there's usually a name or number at the very least. These are exposed onto the film at the factory, and should show up if development was correct.

If you have edge markings then the problem is most likely on the camera side of things. There's a few possibilities; the camera didn't wind correctly, the shutter is jammed or sticky and doesn't open correctly. On the less-likely-but-still-possible end of things, you may have left the lenscap on, or drastically underexposed the entire roll (e.g., set to 1/1000s accidentally while shooting in a dark pub).

If you have no edge markings then there was almost certainly an error in development. Exactly what type of error is hard to say, but there are a couple of usual suspects:

That pretty much happened to me yesterday. Its possible that its a light leak in your camera, an advance error, or bad chemicals. Remember if your negatives are blank, then your pictures were very dark

Not the answer you're looking for? Browse other questions tagged film developing black-and-white or ask your own question.

3
Negatives all transparent after unsuccessful development

4
What caused excessively high grain in Delta ISO 400 film developed by a shop?
3
Why does it look like nothing is on my developed film?
1
Green tone over C-41 developed film
2
Does APS film "Processed" indicator mean the film has been developed?
4
Weird artifacts when using Tmax 100 for black-and-white reversal processing
7
What exactly does it mean to say that a certain film or process 'is tolerant' or 'has latitude'?
2
What is the cause of this very grey film base?
0
My film didn't fully develop
9
Developed film has dark/bright wavy line spanning across entire film