How can I tell what equipment and lighting setup was used for a studio portrait?

I want to analyse this photo. 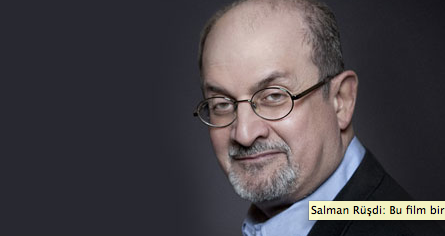 I want to know with which lens it was taken, under which light and how to achieve this 'strange' look.

Four lights? Not quite.

This picture is about as simple as it gets. A single light source was used, above and just to the right of the camera (probably as close as the photographer could get without using a boom). Look at the broad highlight on the forehead, the highlight on the cheek, the shadows under and to the left of the nose, and the specular highlights on the eyeglasses. There is no significant fill; what "fill light" there is under the chin is bluish, and probably comes from Mr. Rushdie's shirt.

It's soft-ish, but not tremendously soft. There is significant specularity to the skin -- not enough to make me say "straight flash", but certainly more than you'd get with a large studio softbox (unless the subject has rather oily skin). Suspect a small umbrella or a speedlight-sized softbox.

There doesn't appear to be separate lighting on the background. The glow around the subject is an odd shape, and can be better explained by image processing (probably in-camera, something like Nikon's Active D-Lighting, although most cameras have some sort of active dynamic range expansion). Consider the shapes of the light patterns that various flash reflectors throw (either a rough rectangle or one of the conic sections) -- if the light doesn't match the patterns, it's either ambient, created by a cookie or other holdbacks (gobos, barn doors, etc.) and will have its own explainable shape, or, as likely in this case, is an artifact of processing.

The background itself could be a plain white wall at a distance (it doesn't take a lot of distance if the light is close to the subject), or a white or grey seamless or pop-up background.

As for the eyeglasses, they're standard-issue, everyday, I-wear-them-to-see, eyeglasses, complete with lenses. You can tell by the nature of the reflections at the bottom -- that's coming from the edge of the lens, not the frame's mounting groove. The reason there are no lights reflected in the look-through part of the lens is that the lenses are directed down and to the picture left (Mr. Rushdie's right). With a single-light setup, that's all it takes to eliminate reflections.

The lens is a moderate telephoto, but that could mean simply the lens that's built into a compact or the kit lens on an inexpensive DSLR set to a "portrait length". There's quite a bit of depth of field, so we're not talking about needing expensive fast glass (like an 85mm f/1.4 or f/1.2) to reproduce the picture.

If I had to create a scenario for this shot, I'd say it was done on location rather than in a studio, with a few simple tools a "house PR" photographer would ordinarily carry -- a single speedlight, an umbrella, a lightweight light stand (although that light stand could be a second person), and perhaps a portable backdrop -- and done in a brief moment of time when Mr. Rushdie was available during an engagement. I'd further suspect that the shot was done as an in-camera JPEG, and underwent minimal additional processing (if any at all).

As for the "how do I analyze a photo correctly" general question, it's a matter of shooting pictures and paying attention to what happens when you change things. It's possible, I suppose, to read a whole lot of books and web tutorials, paying close attention and building up a knowledge base, but there's really no substitute for hands-on experimentation. As Henri Cartier-Bresson put it, "your first ten thousand photographs are your worst." Particularly with digital photography, there's little excuse for not simply shooting and learning (in the film days, with every click of the shutter costing real money, you might want to rein your enthusiasm in to fit your budget). After a while, you'll develop a sort of intuition about things, and intuition is nothing more than logical processing happening just below the level of conscious thought -- it comes from knowledge and experience.

I'm not sure if I got your question correctly by I think with a (1) four point light setup (or maybe even three lights!) you can achieve such photo. 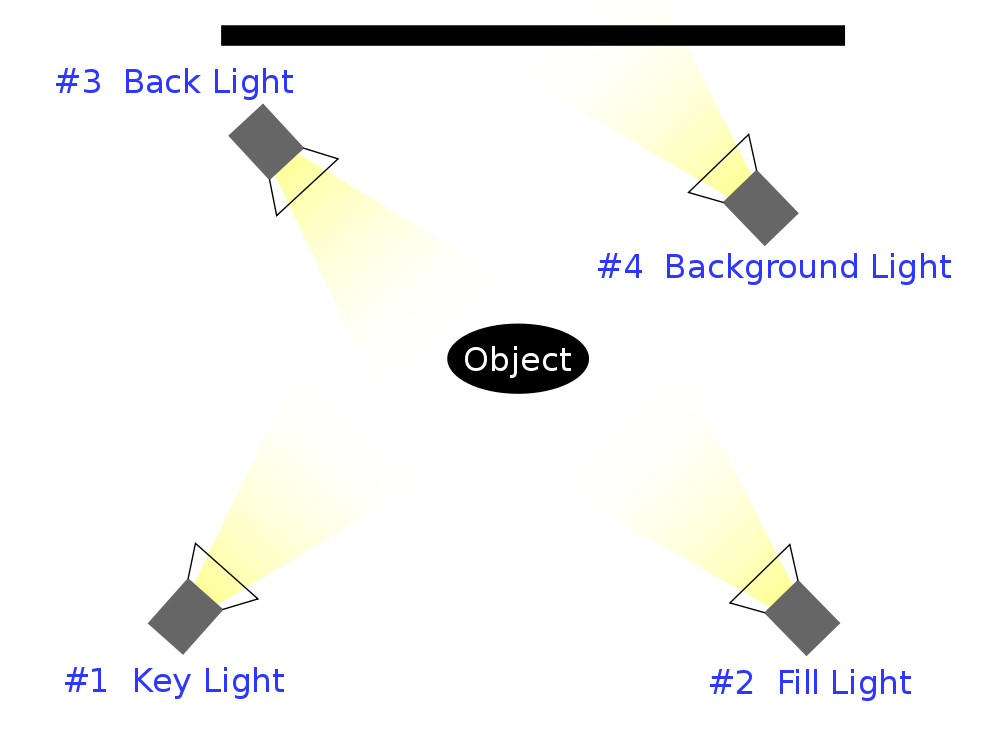 (2) I'm not sure what kind of filters are used but generally speaking photos taken at studio (this answers your third question) are slightly post-processed. Mainly because of the light setup, some details on the skin start to become visible so there might be some small skin retouch, increasing contrast in pupil and etc. (4) Analyzing a photo is a little bit subjective. Based on experience I can say this is a studio photo, but I can not say how do I know! Some parts are objective though. For example, the glow around his head leading me to this idea that we have the case of a back light so this is a four point light setup. In my opinion, analyzing a photo, is somehow personal.

Not the answer you're looking for? Browse other questions tagged post-processing lighting portrait reverse-engineering or ask your own question.

6
What sort of color correction and effects are used in this photo?
5
How would I setup a portrait of a boxer like these?
1
What is this warped effect and how to achieve it?
1
Suggestion for home studio lighting equipment/set up for ghosting(invisible mannequins) garments/product photography?
21
When were white seamless backgrounds and platforms first used in studio lighting?
4
How to approximate diffuse studio lighting outside
2
What would be a good beauty lighting setup for a beginner?