I am photographing a sphere (a ball): in the same picture I have also placed a ruler. The ball and the ruler are in the same plane. i.e. the ruler is placed such that it is aligned with the center of the ball.

I try to predict the size of the image of the ball from the ruler:

The result is that the image of the ball is larger than it should be according to my physical measurement. It seems clearly that there is a problem in the image. Can you guys think of a reason for this?

I am using a FL 5.5 lens with Flash. (This lens has very low distortion.)

If I use a different lens with FL of 4.5, the issue is less pronounced. Somehow the FL has an impact but I cannot understand what.

For an image to be a valid measurement tool two criteria must be met:

Criteria one is easy to verify, are both objects sitting on a flat surface? Do any of the objects have a significant depth when compared to the distance between the camera and the object plane? Eg: A 1 inch ball from 10 inches would likely have noticeable effects, a 1 inch ball imaged from several hundred inches would have no noticeable effect. This is using foreshortening to your advantage.

Criteria two is slightly more complex. Placing two rulers perpendicular to each other on the image plane will allow verification of this criteria. Count the pixels per unit of ruler on both ends of the ruler. If the number is equal then that ruler is parallel to the image plane. Compare the measurement between rulers to verify if your pixels are square.

I have created the following image to explain what happens when the object significantly protrudes from the measurement plane. In my example the ball fills the height of the image. The height of the image on the ruler is 1.35 units. The viewer then assumes that the ball is 1.35 units wide as well. This is not true. Any object can be made to fill the frame if placed close enough to the lens. 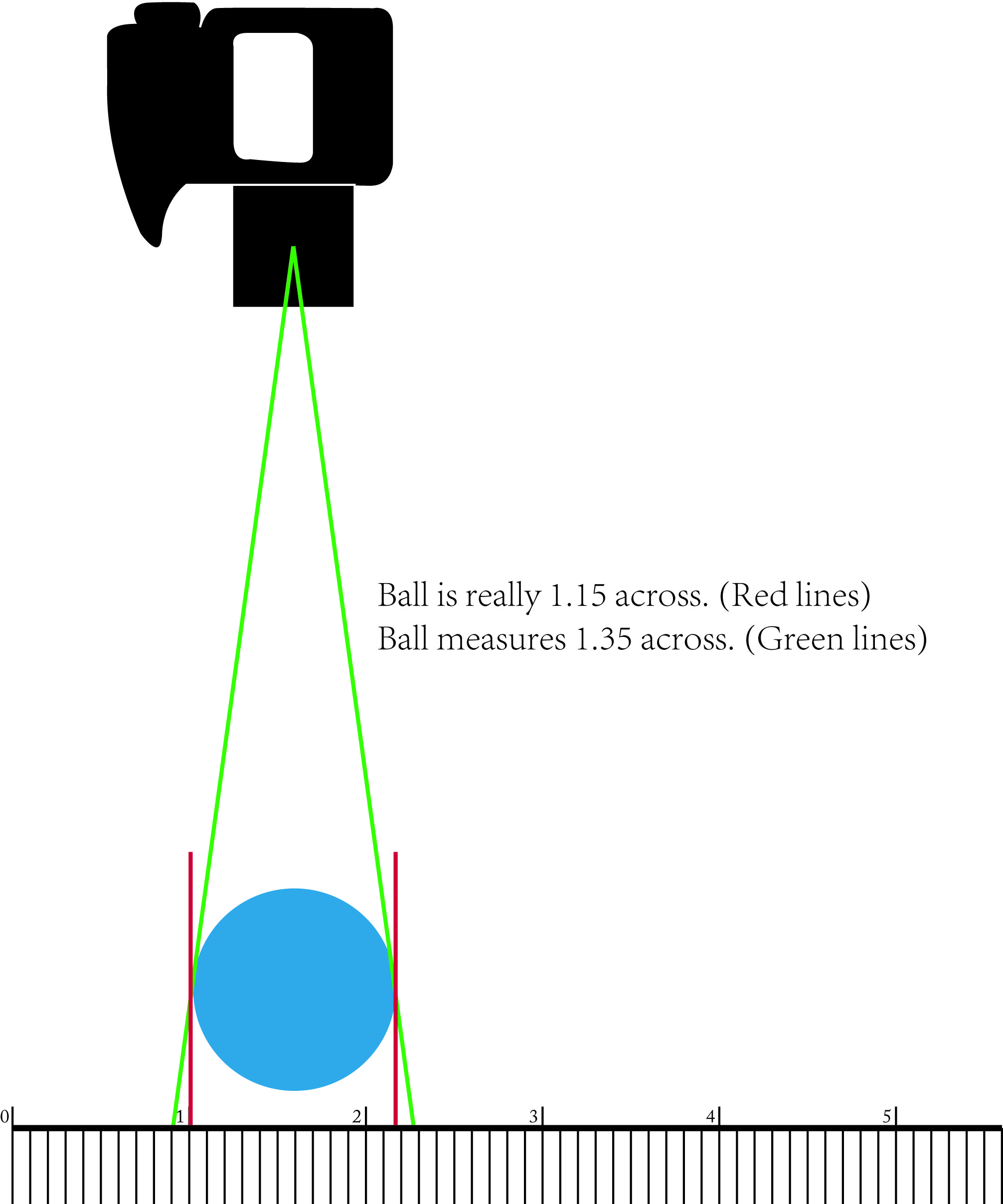 The basic problem is that the ruler and the horizon of the ball are NOT in the same plane. Think of looking at a sphere. If you look from far away, you can see almost half of it. As you get closer you see less and less of the sphere because the horizon moves towards you. You standing on the earth is a great example of looking at a sphere from very close taken to the extreme. Can you see half the planet from where you stand? Of course not. Even from a tall building or airplane, you can still only see a small circular patch of the earth. If you were to put a ruler up to this small circular patch and assume you can see the full diameter of the earth, you'd get a very wrong idea of the whole earth's size.

You are running into the same issue, but not as strongly. The circular disc you see of a sphere in a photograph is less than half the sphere. Let's say you are looking down onto the sphere from over its north pole. The horizon you see is closer than the equator. Not only does that give you the wrong idea of the diameter of the sphere, but the horizon is closer to the camera than the ruler, so you can't even measure it properly.

To minimize this effect (you can never completely eliminate it), get as far back as you can and use a longer lens to compensate.

I think it is a mathematical angular issue.

A ball is a 3 dimensional object, a ruler is (basically) a 2D object, so the relationship of them depends on the exact alignment of the ball and ruler.

Lets say that you have the ruler level with the back of the ball (from the camera's perspective) then the ball will appear larger than is really is when compared to the ruler scale.

However its not just that simple - because your lens is wide angle, i assume your camera is quite close to the subject(s), so you will experience a phenomena that i cant remember that name of... (how useful am I?!!) whereby the angle the light enters the lens from causes the ball to fill more of the frame than the ruler scale suggests.

I'd say that you are observing distortion, and it is a very nice experiment that you have tried.

It is similar to how straight lines can appear curved and angles get distorted.

This has a simple mathematical/geometrical explanation: In any basic geometry book you will find that the tangent to a circle is perpendicular to the line that goes from the center of the circle to the point where the tangent touches the circumference.

Following this, the tangents that touch the extremes of a diameter for a circumference, will be exactly parallel, that is, those lines won't converge at any point.

If you make a prolongation of the lines until they intercept the diameter of the circumference, you'll find that the intersection point does not fall in the circumference but outside it, even if by a small amount.

Also, if you measure the distance between the touching points, you will find that it is in effect smaller than the circumference's diameter.

When you see an image of a sphere, the border of it is formed by rays of light that travel tangentially from the ball towhards a convergence point (presumably inside the lens) since there is a convercgence point, you are seing the same effect described above for a 2D context, but from the convergence point.

Another way of thinking about it is: if those rays of light became solid, they would conform a cone, wich would not be able to touch the ball's diameter, the only that could touch the ball by its diameter would be a tube.

The effect that you are seeing is unavoidable, and it is not related to the focal length perse, but to the distance from camera to the object. If you get further from the objects, the angle of the so called tangential lines becomes sharper, that is, closer to parallel, thus minimizing the difference you are describing.

(Sorry I do not have access to drawing tools at the moment. This is much easier to explain graphically)

1
Why doesn't PNG show more detail than JPEG in a converted NASA image?