Why would I want to use a tilt shift lens for panoramic photography?

I read that some people use tilt shift lenses for panoramic photography, and being that I currently have access to the Canon TS-E 24mm f/3.5 L II Tilt-Shift Lens I wanted to give it a try. Do I just shift the lens the furthest each way? Do I have to take more then 3 shots to account for overlap?

Using camera movements for a panorama is a good idea, but using the shift ability of a tilt-shift lens is a little less than ideal.

Ideally, you'd want to make sure that the lens stays anchored in space, giving exactly the same point of view at all times, and simply move the sensor around in the lens's image circle by moving the camera body relative to the lens. That would mean that there is no parallax at all when stitching the images together. With the camera body mounted on a view camera as a "digital back", that's precisely what you'd do.

Unless I've been missing something glaringly obvious, though, it doesn't appear that the TS-E 24 has a mount available in front to the movement block, so keeping the lens anchored in space would be difficult unless you have something like a macro focusing rail. That would allow you to offset the camera by exactly the same amount as the shift offsets the lens.

The TS-E 24 II has ±12mm shift, so you should be able to get away with three shots (left, center, right) on an APS-C camera or two (left, right) on a full-frame. Since there will be parallax, though, you may have to take more images to get satisfactory stitching. Depending on the complexity of the subject field (how many stacked layers of depth there are), you may have to take more—5 to 7 with APS-C or 3 to 5 with full-frame.

Its often easier to see the tilt shift when you've got a large format system. Moving the standards (the things that hold the film and the lens) around Lets consider some aspects more easily than thinking about an SLR system with a TS lens.

First, lets look at some large format lenses. The number of interest here is the 'Image Circle @ f/22' column. One of my favorite lenses is the Nikon Nikkor 210mm f/5.6 which has an image circle of 295mm. This lens is designed for a 5x7" frame rather than a 4x5" - but that just gives better images for the 4x5 and more room to work. There are lenses with even larger image circles at the same focal length such as the Schneider Super-Angulon f/8 which has a 500mm image circle. This number is the diameter of the circle.

Five inches in millimeters is 127mm. It should be apparent that we've got a lot of room to work with here, though not quite as much as that lot of room would indicate at first. Things get fuzzy at the edge, you start getting chromatic aberrations and the like. If you look at an MTF chart you will see that lenses drop off in quality as they get close to the edge of the image circle.

Still, Nikkor 210mm has about 90mm of shift that can be done (4x5in Max Rise Portrait, but then we're talking about horizontal shift in landscape... which is the same number). Thats huge with a lot of room to work with.

The thing is, thats the image. The full image circle. If you don't move the lens, you won't introduce any parallax error into multiple frames being shot from the scene.

Now, in a SLR world, its a bit more tricky. Typically, when one puts a camera on a tripod, its the camera that is in a fixed location and you are shifting the lens back and forth. Such a shift would introduce parallax error.

There are two approaches to resolving this. One is to use a panoramic or macro tripod head. An example with the macro tripod head is Neewer Pro 4 Way Macro Focusing Focus Rail Slide which looks like: 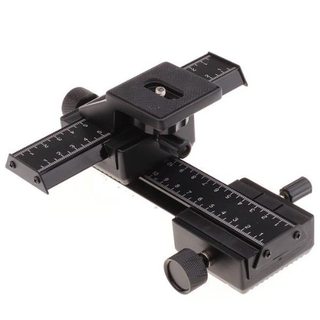 An example from Really Right stuff equipment (more on this below):

The other approach would be to rig up a lens cradle with a tripod mount on it. One often sees these for larger lenses where the significant weight of the lens makes it something you don't want hanging on the camera at odd angles - you support the heaviest thing.

The weight of a 24mm TS lens is much less than that of a very long lens - these aren't things that one would find easily (you'd likely need to make your own). But if you could rig up a collar for the lens, you could then mount that collar to the tripod and shift the camera back and forth behind the lens with the lens staying in place. Apparently, these do exist for certain lenses.

I will state its probably easier to go with the focus slide than trying to rig up something for the lens.

Really Right Stuff has some excellent material (if I wasn't invested in the Bogen hex plate heads, I'd certainly be considering them) on shooting Tilt Shift Panos with their products. If one is looking to invest in tilt shift lenses, remember that the best thing you can do to get the quality of photographs you are expecting from it is to also invest in a good tripod system.

I will point out another approach to all of this is to go with a hybrid system of SLR and large format with something akin to: 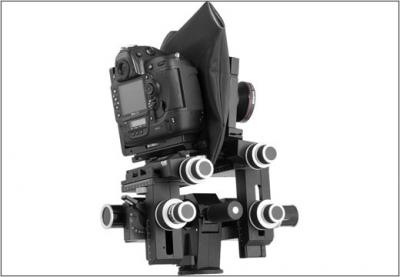 The above example is the Sinar 35mm integration system. It is an interesting idea and would give you a lot of control (and if you thought that 295mm image circle was large for a 127mm horizontal... think about it with a 36mm horizontal. Though this does involve getting a large format camera rail camera (not cheap), a large format lens (not too bad used), and a porter to lug all of this out into the field (not light).

I could only see using a T/S lens for panoramas if you already have one and you don't want to cover a large angle of view.

Other than that, a panorama tripod head is the best way to go. Besides being cheaper you have so much more flexibility.

For that matter, today's blending algorithms are so good that you can get away with hand-holding and not have to worry about artifacts.

As I understand it, it's easier to make panoramas with a tilt-shift lens since there's no need to apply any projections when merging the photos. Ideally, with exactly the same lighting between shots and the position of the lens exactly the same, it should be possible to simple overlay the photos over each other to get a good result.

Without a tilt-shift lens, you need software that re-projects the image data (potentially losing image detail).

Not the answer you're looking for? Browse other questions tagged panorama tilt-shift or ask your own question.