Why don't usual pictures of Sun show any protuberance or explosions?

I was just looking at this picture :

and wondered why no Corona or trace of the little explosions on the surface of the Sun are visible ...

How should the Sun be photographed to see those details on its surface ?

It's because that image is only capturing the visible spectrum. Most of the images you see of the sun are capturing the ultraviolet spectrum, where you see some really impressive explosions and coronal ejections: 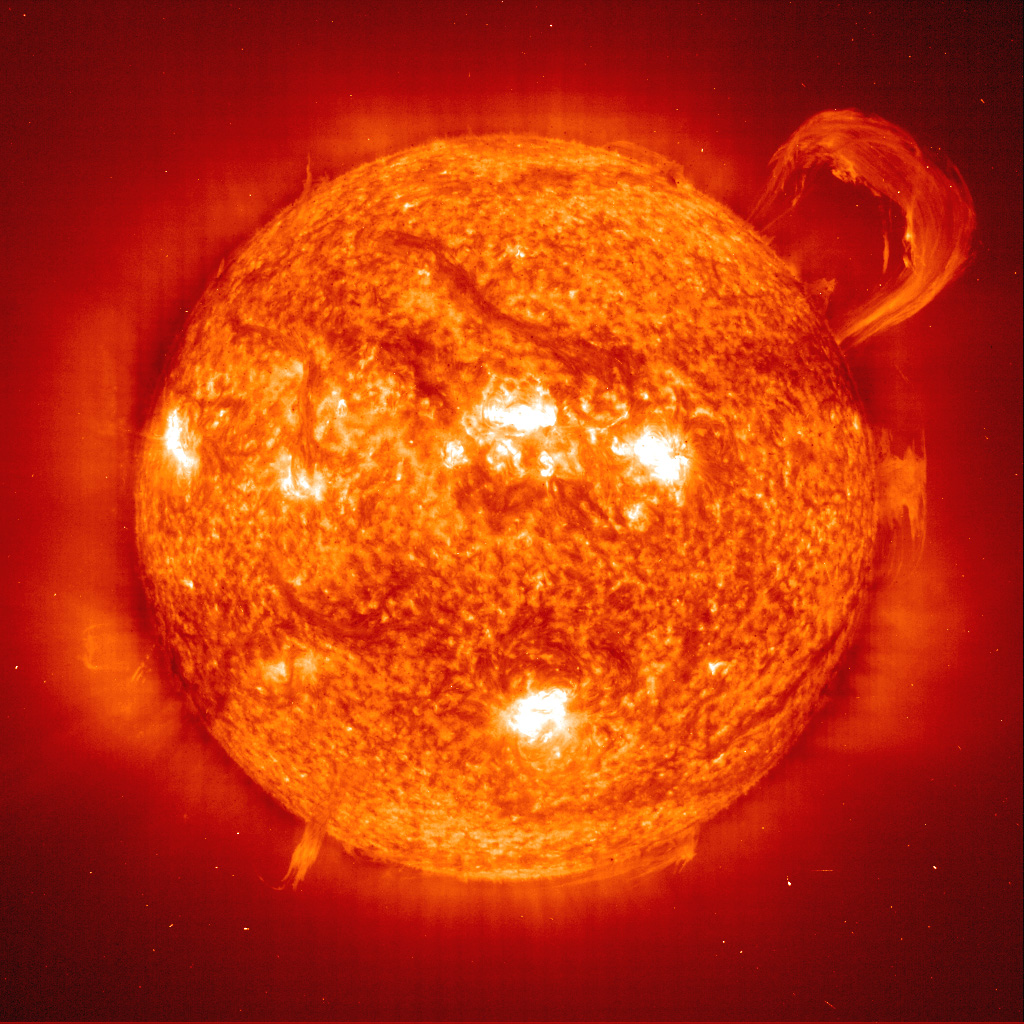 That image was taken from space with a highly specialised scientific camera, but you can capture some details, including prominences using a DSLR in conjunction with an appropriate filter: 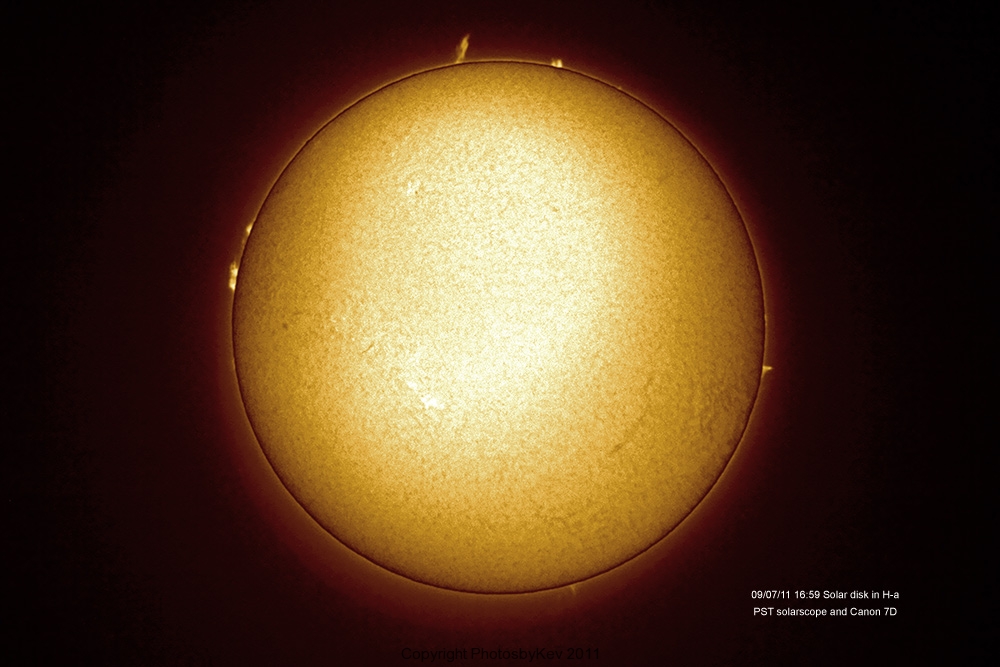 The filter used in this case was an Hα filter, designed to let through the frequency of light produced when an electron in a hydrogen atom changes energy state (it would be an understatement to say that there are a lot of hydrogen atoms in the sun). Note this is a multi exposure image with one exposure for the main disc and a separate longer exposure for the prominences (flares coming out of the sun).

This is a simple exposure problem and there are a few facets to it.

The dramatic images showing solar prominences and filaments are shot using special narrowband telescopes (or filters) which only permit light at the Hydrogen alpha wavelength to pass. Hydrogen alpha is a dominant wavelength in the Ballmer Series (https://en.wikipedia.org/wiki/Balmer_series) with a wavelength of 656.28 nanometers. Visible light are the wavelengths between 400nm and 700nm. 656nm is well within the visible spectrum.

If 656nm is inside the visible spectrum, then why wouldn't it show up in images shot through unfiltered camera lenses or telescopes using a traditional camera?

It turns out it does... under the right conditions: 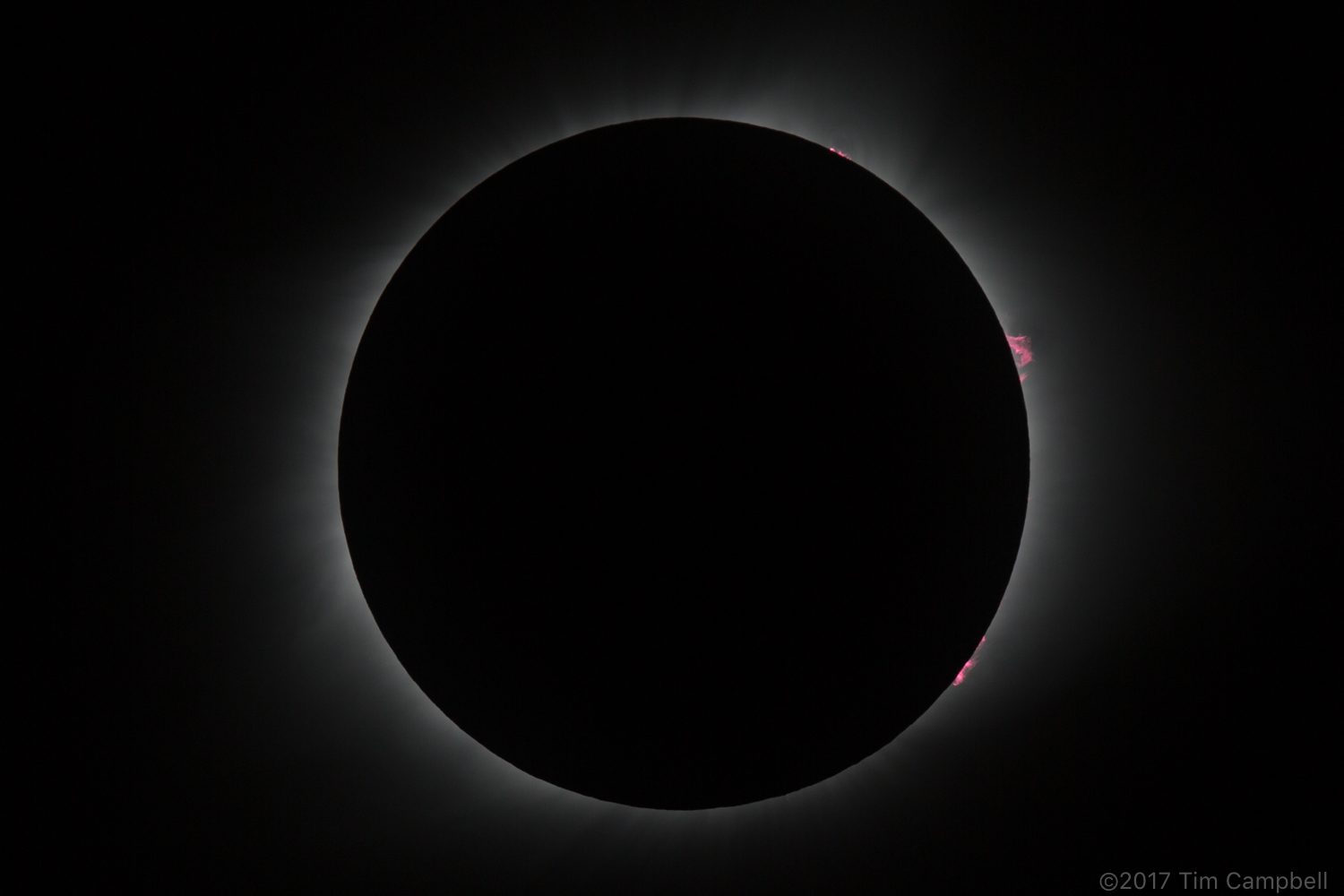 The above image is one of many that I shot during the August 21, 2017 total solar eclipse in the United States. I used a Canon 5D Mk III attached to a TeleVue NP101is apochromatic refractor. At this point during the eclipse, the telescope is unfiltered. This is not an edited or modified image (other than a crop). This is ISO 200 @ 1/500th sec through an f/5.4 telescope with a 2x TeleVue PowerMate (effective focal ratio is f/11 with the 2x PowerMate attached (a PowerMate is a telecentric focal length multiplier.)

The sun is a black-body radiation source (https://en.wikipedia.org/wiki/Black-body_radiation) emitting wavelengths across the entire visible spectrum -- and beyond. But the prominences are hydrogen alpha ... just one particular wavelength. If the entirety of the sun is visible and all wavelengths are permitted to pass, there is such an abundance of light in the visible spectrum that the exposure needed is simply not long enough for the hydrogen alpha features to be visible. When the exposure is long enough, the rest of the wavelengths in the visible spectrum would completely overwhelm the sensor and you'd just get a blown out image.

You can get these sorts of images during a total solar eclipse ... but since eclipses don't happen frequently enough to be convenient, other methods are needed to photograph these features.

Prominences and filaments are features of the Sun's chromosphere. This is a higher layer of the solar atmosphere above the photosphere. The photosphere is the part of the sun we traditionally think of as the "surface" -- although since the Sun is a hot ball of gas, it isn't a solid surface. You can photograph the photosphere if you have a safe solar "white light" filter attached to the front of a lens or telescope.

To image these features visible in Hydrogen alpha light, you need a narrowband filter.

Caution: The Sun's energy can easily destroy equipment such as cameras, lenses, or telescopes. I don't advise doing this without a bit of research to make sure you are using both equipment and techniques that wont damage your gear.

This gear blocks the entire visible spectrum except for the narrowband near the Ha frequency. Even this gets a little complicated because filters will allow a specific bandpass at which a narrower bandpass will all for greater detail and contrast on the surface, but prominence features at the limb will appear weaker. Slightly wider bandpasses will capture more detail at the limb, but less surface contrast. In solar astrophotography it is common to shoot image data for the surface and for the limb separately and then combine the two.

Traditional cameras are usually not used. Instead, a high-speed CMOS camera with an electronic global shutter (a global shutter can read out the entire sensor in parallel ... most cameras have an electronic rolling shutter which means the sensor reads out row-by-row). This allows for fairly high-speed imaging to capture a few seconds of uncompressed video frames that will be combined and processed into the completed image. (while the favorite camera models change over time, the current favorite for this type of work is the ZWO ASI174MM camera.)

If you are interested in this type of photography, I would recommend picking up the book Lessons from the Masters edited by Robert Geller and read the chapter titled Catching Sunlight by Alan Friedman.

Martin Wise produces many solar images and has YouTube videos detailing his process. You can find one here: https://www.youtube.com/watch?v=G-41RMTCdTE

Note: The sun is currently in a quiet period (solar minimum) in its roughly 11 year activity cycle. The features you are interested in are infrequent (days or even months may pass without much activity). Activity will start to pick up in a couple of years and it will likely be highly active in about five years.

Spontaneously I would say they are just too small - compared to the sun's size. You can't see mountains from the ISS on earth either.

Not the answer you're looking for? Browse other questions tagged astrophotography sun or ask your own question.

10
Pixel-to-RA/DEC mapping in digitized astrophotography
8
Why milky way galaxy cannot be seen by human eye while by camera?
8
Stack of 4 seconds exposure photos of Milky Way, how is it done?
0
What creates a bright green orb “lens flare” with silver or metalic dots on it?
40
Why do stars appear as circles, not points?
0
Is this color-correction explanation of images from a lunar lander gobbledegook?
3
Why did I see sunlight reflection in viewfinder but not in final image?
22
How to capture more stars?
9
Why is the earth not overexposed in this star photo from the ISS?