Are there true 360 degree cameras?

I'm looking for a true 360 degree camera, so that's both vertical and horizontal 360 degrees. I've seen some clip-ons for the iPhone, but am really not wanting to by an iPhone 4S for this.

A camera that shoots in every possible direction is said to have a field of view of 360 (horizontal) x 180 (vertical) degrees. Having more than that means you will be capturing some or all of the scene twice. Consider an imaginary arc that spans 180 degrees, from the top to the bottom. Now rotate this arc 360 degrees horizontally and you have covered the whole sphere.

If you refer to this product, then I don't see any mention that it records video. All it seems to do is take a single panorama when it reaches the highest altitude.

Another similar product is the Tamaggo 360-imager. It isn't out yet either, and while it captures 360 degrees horizontally the vertical range is less than 180 degrees. And it doesn't do video.

Yet another panoramic camera, the DIY Streetview Camera System, is a much better (and expensive) system than the other ones. Based on the example images on their site it shoots much better quality panoramas. It cannot do video, unfortunately. The fastest rate it can shoot at is one panorama every 3 seconds.

I think with time and patience one could build a DIY 360x180 video recording system. You would mount a bunch of small video cameras (maybe video enabled point & shoots or GoPros) to cover every possible direction with some amount of overlap. You want cameras that can be set to manual mode, since you want to get a consistent look from all of them. For syncing the cameras you could build some sort of controller that signals the cameras to start recording all at the same time, or else just start them manually and once all the cameras are running clap to get an audio cue that can help you sync the videos during post-processing.

To process the multiple video streams into a panoramic movie you first need to calibrate. For this you would take one set of images and build a panorama manually using, say, Hugin or Panorama Tools. Once you have a panorama project file that contains all the stitching parameters you can take the videos, break them into sequences of individual images using ffmpeg, run each set of images through the calibrated Panorama Tools project, and finally assemble a new movie with the stitched images using ffmpeg again.

Let me know if you make one of these ;-)

With the advent of 360x180 content on Youtube and Facebook, there's been an explosion of 360 cameras (video and still) of late. Many of these are action cameras. Here are the cameras in the $350-$500 price range, that are listed in this June 2016 MacWorld article:

There are a number of fisheye lenses that capture 180 degrees. You would have to, of course, rotate the camera and shoot at least two and probably 4 shots and then stitch them together.

There are commercial panoramic heads that will rotate the head for you, or you could hack up something with an Arduino, a servo, etc.

I think, IMHO, that its pretty crazy and I don't think the image will be as cool as you hope. but hey, this is art. go for it.

Remember, with the really wide fisheyes, you end up with your feet or the tripod in the image.

I found a couple of alternatives by searching google with 360 camera.

Maybe, Ricoh Theta S matches your requirement. It has all the features you asked for which includes - HD recording (up to 25 mins), 30fps, Wi-Fi capability.

Ricoh Theta S is the upgraded version of Ricoh Theta which was mentioned by szulat.

If you have a professional budget, you should look at the Lytro immerge

Just today on the hugin-ptx mailing list I saw someone promoting the http://www.geonaute360.com/, maybe that's what you intend. Not full 360x180, but very close to it.

There are setups available using multiple GoPro cameras. eg 6 cameras on the outside of a cube, to give 360° coverage.

GoPro make the Omni system. This uses 6 GoPro Hero4 Black cameras, on a cube. All of the cameras are synchronised, so will all record a picture at the same time. And they can all be controlled with a single remote. But is very expensive - $5000 for the full system, including the rig, with 6 cameras, software, and accessories. Or $1500 just for the rig. 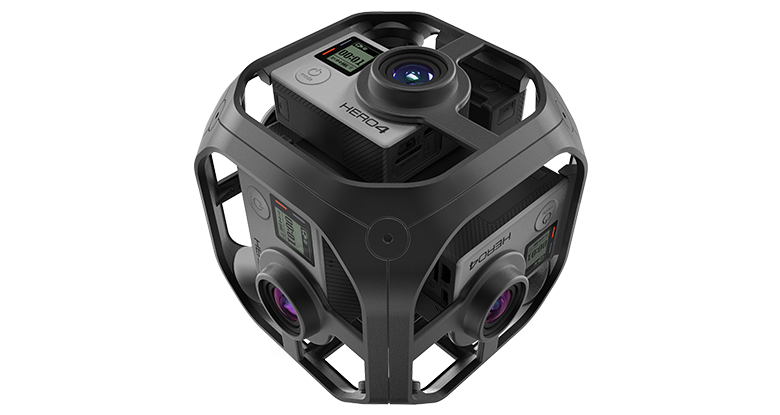 Or there are a variety of cheaper rigs, for mounting multiple GoPro cameras. Some are cubes, or circles, or various other shapes, depends on what coverage you want. Some use up to 10 cameras, for even higher resolution. Though most these cheaper rigs are not synchronised, so would be more difficult to take a photo with all of them at once. Video footage could be synchronised with software afterwards, but it would be more work.

Not the answer you're looking for? Browse other questions tagged panorama camera-recommendation 360-panorama or ask your own question.

0
What cameras can be used for custom street view? I mean lots of overlapping spherical panoramas which cover long distances
23
How are virtual tour photos taken?
1
Minimum requirements to capture a "Street View"-like photo?
6
How do you avoid showing the tripod in 360º (spherical) panorama photography?
3
Digital strip camera options?
-1
Is it possible to digitally capture a full 3D point of view?

7
What are the best techniques to take 360° panoramas?
5
Do I "need" a panoramic head to shoot 360 panoramas?
1
Stitching multiple camera panoramas
1
Are there any 360/Sphere open source photo resources?
1
I want to make a 360 degree photo in one static photo
0
Convert a 360 degree video to a single image
1
Hugin 360 problems