How can I make my beach shots more interesting?

I like to visit beaches on my vacation, so I always come back with shots of the shore and sand. They always turn out quite boring, and I'm not sure what they are missing generally speaking to really capture how great they were. The beaches that I am usually visiting are quite empty, so I can't readily just add a subject for interest. What other ways can I capture the "laid back beautiful beach" vibe? 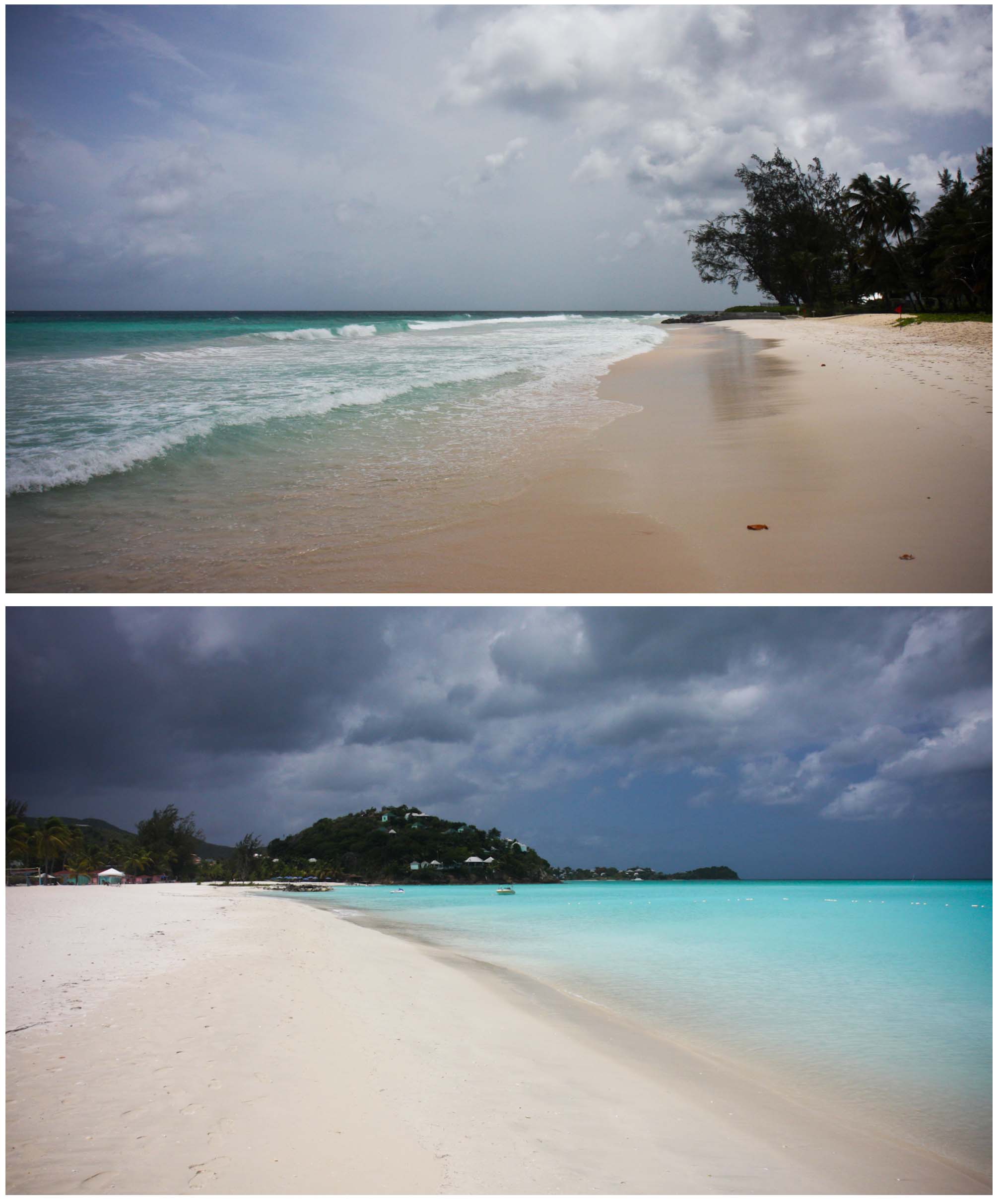 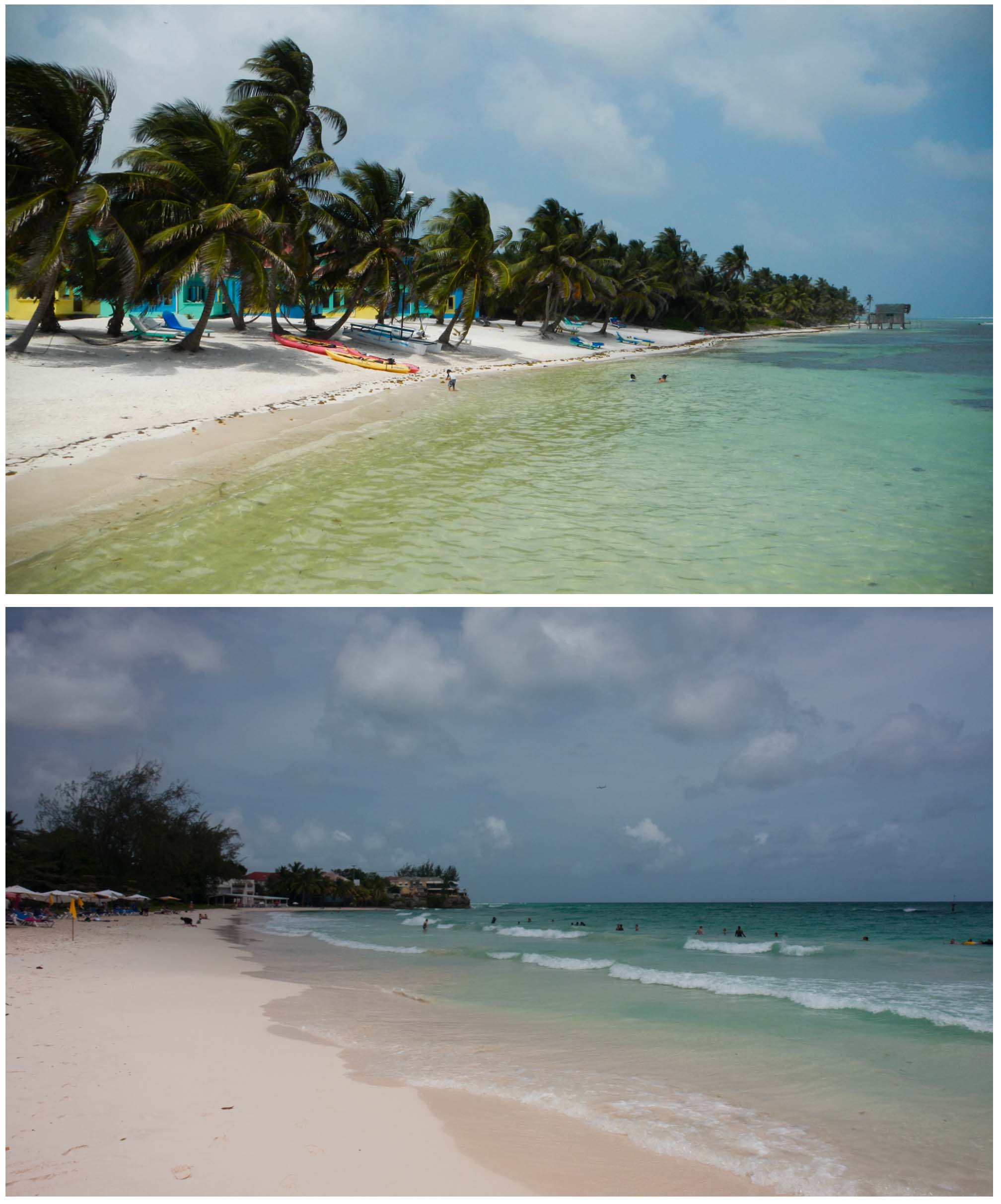 You should try some variations having in mind "rule of thirds". All of these photographs seem to have the horizon somewhere in the middle. Placing it in the lower (especially with 1, 2 and 4, because I find the clouds to be quite dramatic) or upper third might help.

Also, when shooting landscapes, don't be afraid to shoot in portrait orientation. Sometimes the same scene will look much better.

Another "rule" of composition for shooting landscapes is adding a bit of layering if possible. Placing something in the foreground might give the viewer a starting point to look at, and progressively move on to the background.

Also, you might consider varying perspectives, because all of these seem to be shot from eye-level height.

IMHO, #1 and #4 should be somewhat lighter, contrast is fair, but (although this might be due to the low resolution or image compression) all of the images lack sharpness. Sharpness (depth of field / focus) can be bettered by focusing on the hyperfocal distance for the selected focal length and aperture. This can be combined with the foreground element of the photograph I noted in the composition part.

In addition to the lightness issue, it's mostly difficult to properly expose for both the sky and the land. There are 3 ways (to my knowledge) to address this:

These pictures are "properly exposed". There's little that's "proper" about a beach. It's always a little too bright, a little too colourful, a little too hot (and if all goes well, a little too naked, but that's not a photographic issue). Your pictures should reflect that, even if it wasn't really the case—unless, of course, the weather was bad enough and the surf turbulaent enough that you could get something really moody and ominous. Oh, or if there was a spectacular sunrise or sunset happening, you'd want that to be the focus.

Taking these pictures for a quick tour through Adobe Camera Raw (I'm stuck at version 4.6 locally, which is similar to the develop module in Lightroom 3 as far as numbers go), I found that all but the third frame could have stood about a one-stop exposure boost, with just enough recovery to bring back the sand, and about thirty points each of clarity, vibrance and saturation (and boosting the vibrance a little more, almost to the "postcard" point, doesn't really hurt). I think that if the initial exposure had been about a stop higher, nothing would have suffered much. There wasn't enough in the JPEG to bring back the green in the foliage, but it's probably there in the RAW (or would be with the extra stop in-camera).

If the skies here are more-or-less as shot, cool. If you've processed them to have colour and detail, let that go. It's okay to let the sky become light and indistinct in a beach shot; it only adds to the feeling of light and warmth. If the sky were a pure, intense blue, you'd probably want to hold the blue, but if it's heading for white, let it get as close as it can without clipping, otherwise it sort of feels like there's a storm a-brewin'—and nobody wants to be at the beach during a storm. I'd try fading the sky back a bit in the first, second and fourth image, just to see if it makes it feel more beach-y. (I'd also consider bluing it up a bit to make it feel lighter and less like weather, if you know what I mean.)

Compositionally, I really like number three, but the lay of the land doesn't always cooperate, and there's no way to tell without being there if there were better options for the others. #3 looks like it was made to be photographed: a thin strip of beach on a relatively high angle with a point of land stretching not quite out of frame. The wider beaches on the other three images wouldn't allow that shot. With beaches, I would specifically advise against the usual twaddle about using third-lines to locate the horizon, unless you move the horizon upward (losing the sky). If you want a picture of the beach, pointing the camera upwards will pretty much make that impossible without a very wide lens. The "rule of thirds" isn't a rule, and there are times when trying to use it works against the image. Don't be afraid to move the horizon off of the centre line, but the third lines are usually going to be wrong.

But try fiddling with the development settings; they may not change the composition, but they really bring what's there to life. (If you think you've gone too far, it's probably about right. Look at it with fresh eyes tomorrow.)

Not the answer you're looking for? Browse other questions tagged composition travel subject-positioning or ask your own question.

5
How can I give an ethereal appearance to a photo?