How do I set the focus in long exposure night sky shots?

I want to catch a good long exposure (5 - 15 seconds) shot of the International Space Station in the night sky as it passes over my city.

Setting the ISO higher (say, to 100) and the exposure time is straight-forward enough. I'm using an aperture of f/5 but what should the focal length be?

It's difficult to gauge using the naked eye and viewfinder. I'm using a Canon 400D.

The last time I took picture of the night sky, the following was what I learnt:

edit: 1 - The pin pricks of stars becomes slightly elongated that they look more like star pills than star trails or dots of stars

I had a great flyover of the ISS back in March of 2009, the ISS was passing near Orion. I wanted to get some shots of it. It wasn't my first ISS flyover so I knew what to expect with regards to brightness and speed. But still, I guess at the exposure.

The camera was a Canon 40D, (crop body) and I was still shooting jpg at the time. The EXIF says 28mm so I guess I believe that, I know it was a kit lens. ISO 1000, f3.5. I used a Canon TC-80N3 timer, set for a series of 5 second exposures with 1 second off between shots. I knew this would give streaks for the ISS but I also wanted better stars. (The 1 second off was an error on my part, but it worked out well.)

The gear was tripod mounted, but not on a tracking tripod. I hoped the wide field and short exposures would minimize star trails.

I used manual focus, going to 10x on live view and focusing on a bright star in Orion.

Each individual shot was as expected, slightly disappointing. 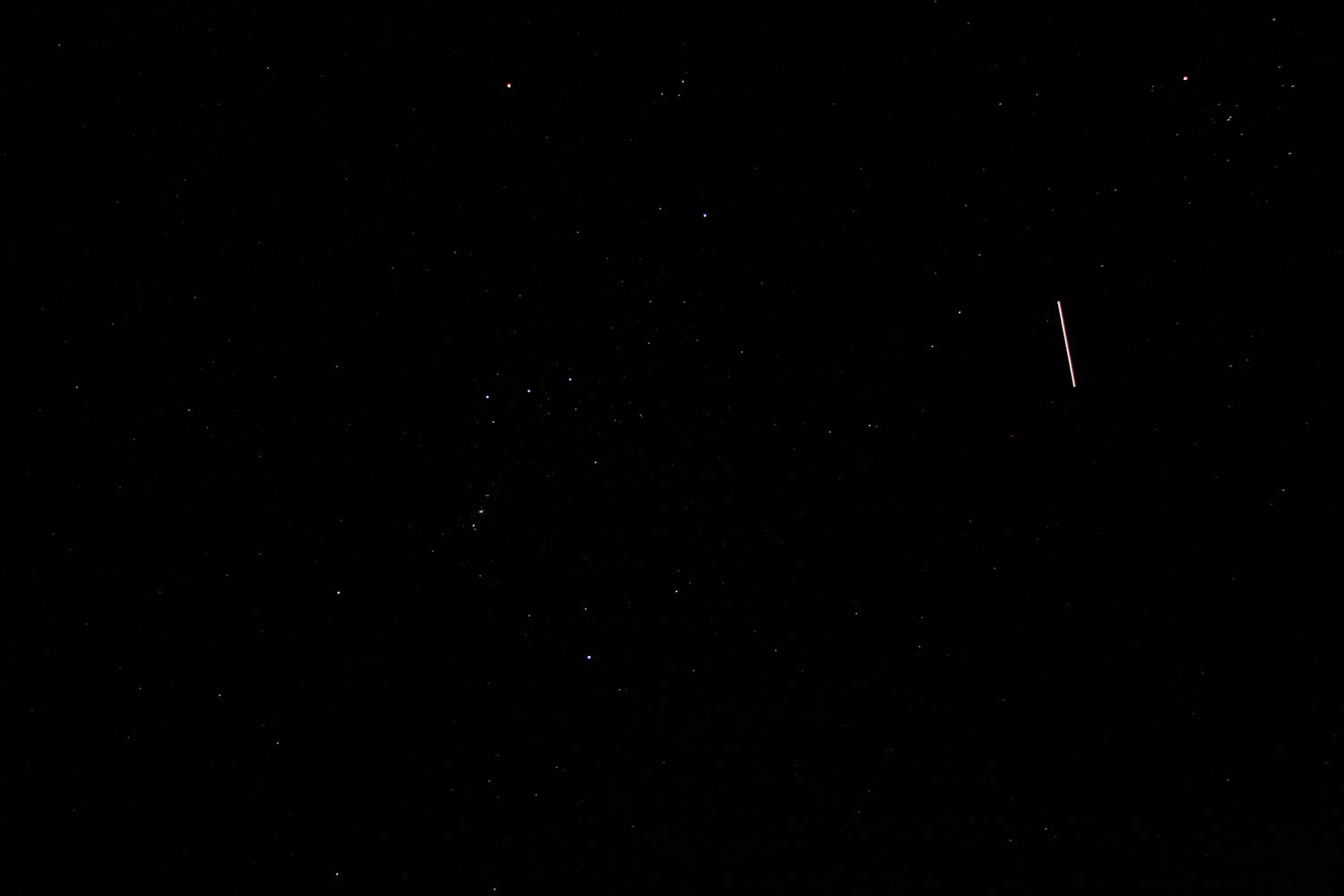 You can see the bright trail of the ISS but the stars are dim, certainly dimmer than they were to the naked eye. (At the time I lived in a very dark area.)

But when I stacked the 14 exposures I was able to combine the light fromall the dim stars and make this exposure. 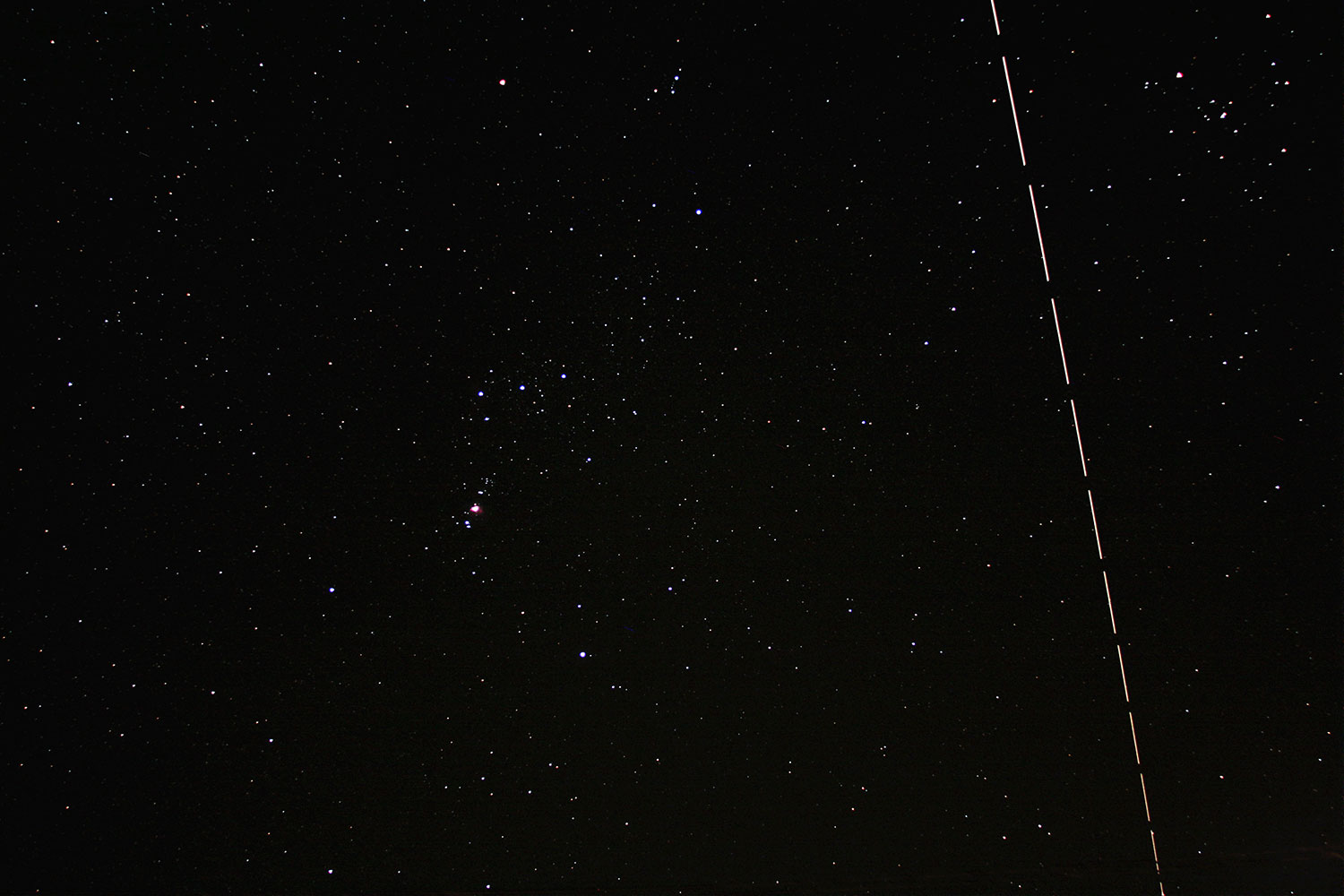 Here you can see the star field like my eye saw it, plus you can see how the ISS appears to accelerate as it gets higher. (Of course it doesn't, it just appears to.)

You can also see the red glow to the Orion nebula, showing the advantage of removing the IR filter for astrophotograhpy even for wide field shots. Of course, this is much more visible when shooting through a telescope!

As mentioned, many lenses do not have a hard stop at "infinity". What you'll find by playing around with your lens, however, is the distance your lens considers infinity is really not very far away (measured in meters instead of kilometers). This distance varies by lens, so a little daytime research with your particular camera body and lens combination will tell you how far away an object must be in order to consider it a good focus target.

You have at least two decent options, both of which assume you'll intentionally put your lens in manual focus mode for the duration of the photo shoot:

-- prepare for the shot during the day, and manually pre-focus your lens on any object that's sufficiently far away to be at infinity. Note where that focus point is on your lens so you can return to it later when you're ready to make your low-light images.

-- if you don't have the chance to prepare earlier, then you'll need to find an object that you can focus on during your shoot that's effectively at infinity. I often find a distant light source for a focus object, which I otherwise usually don't want in my long exposure. If you are in a truly dark location with no available light sources (like someone's porch light or a security light), then you can focus on a flashlight that you temporarily set down beyond the "infinity" focus distance, find your focus point, turn off the flashlight, and make your image.

I use live view and focus on a star.

For focal length, I generally use a wide angle, but that's subject to taste. Use whatever is appropriate to capture the angle of view you want.

If you're photographing things like the sky, or even lighting, the best thing to do is just use manual focus, and set it to infinity.

Most of my AF lenses do not have a hard stop at infinity. I usually try to prefocus on a distant object and use gaffer tape to lock the focus lens. You can also use a large rubber band, or mark the lens.

Live view, zoomed in, does seem to be the standard practice, but I have found it difficult to judge.

38
How to nail focus for DSLR astrophotography?
2
What lens and setting to take ISS photo?

76
How does one focus for landscape photos in very dark conditions?
25
How do I focus in low light for long exposures?
8
Why are the trees in this long exposure night shot red?
2
Night Sky SuperResolution (instead of star trails) - possible?
8
Time-varying artifacts in long exposure: is it the sensor?
1
Black sky for night long exposure
13
How can I achieve more clarity in my photos of the moon?
5
Object in night sky long exposure
9
Why does the NEOWISE comet appear green on my photos?