What surface to use for food photography?

Most of the photography I have been making recently has been for my Cooking.Stackexchange blog posts. I have run into some problems when choosing a surface to put the food on. Maybe somebody can suggest a better idea?

This is what I have used so far. 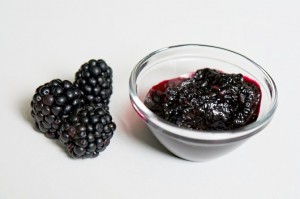 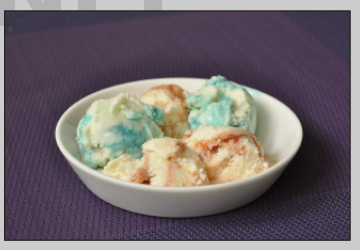 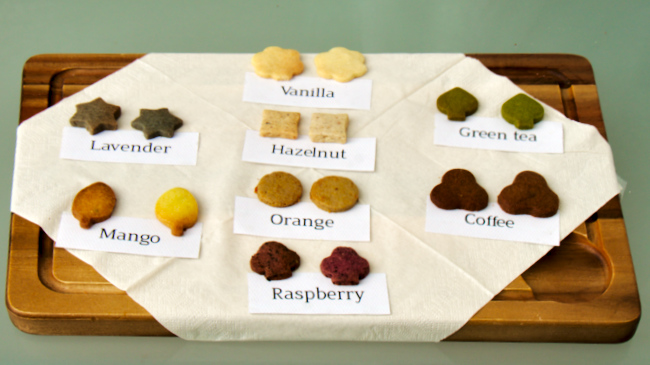 Can you recommend a surface which doesn't have these disadvantages? It should be easy to stow away (I can't afford to keep a fully built-up setup all the time), reasonably cheap, and look good. I need it to be big (my melamin plate is about 100x80 cm and I hit its limits when I shoot from shallow angles). No strong colors, and it shouldn't reflect much. I would prefer some subtle irregular pattern, not a uniform color. A slight neutral color would be good - pale cream or yellow is OK, but I am considering a light neutral grey so I can measure white balance off it (when I shoot with natural light, it is too much work to make a greycard picture every time a cloud moves in front of the sun). And I must be able to easily clean it from spilled food during a shoot. Something pliable (so I can construct a makeshift seamless background) would be nice, but not necessary.

I guess the perfect surface doesn't exist, but if you can come up with ideas which match most of those criteria, I would be very happy.

Edit The "easy to clean" criterium is non-negotiable. I want to place a juicy berry directly on the surface, or a stack of cookies. When I move them around, I want to be able to wipe off the resulting juice stain resp. grease stain without much effort. This makes paper and fabric a bad choice for a "main" surface. (I am aware that I can temporarily use napkins under plated dishes, but I am more concerned about a "generic" surface right now). Also, I am pressed for space, so, I am looking for something which will look reasonably good in most situations, as opposed to a selection of surfaces which look great in a narrow range of situations.

Food usually looks best in its natural habitat; I think it's a mistake to shoot it in a "Sears portrait studio", isolated sort of way. When you shoot food with nothing but a backdrop/tabletop or a sweep, you lose a lot of the visual cues that tell the viewer that the food is delicious. Baked goods, for instance, often look their best surrounded by the trappings of baking: a bowl of eggs, a sack of flour (like anybody actually uses fabric sacs at home anymore), a few vanilla beans, or what have you. Plated main dishes look best in a place setting, complete with flatware, beverage, napkin, perhaps candles and/or a centrepiece, and so forth. I'd have been a lot more liberal with the blackberries, for instance, and had them surrounding (but primarily behind) the bowl.

That means, among other things, that your surface doesn't need to be nearly as large as it might seem at first. In some instances, you can sort of build a "backdrop" of associated goodies that rises out of frame at the back. In others, you can let the table come to an end, with an out-of-focus background that lends an ambience to the setting. That out-of-focus background can be quite fake, as long as it looks right in the picture. (A piece of cheap tan or light brown paper/cardboard and a few shiny things, if they are well-blurred, can simulate a wood-panelled dining room with Michelin stars well enough that very few will be able to tell the difference.)

Your actual surface should vary with the food you're shooting. For some things, you'd want a very plain, honest, rustic wood surface. That would probably be the table you're setting up on (and you can make that a modest-sized folding table). Beyond that, you're looking at tablecloths (or cheap fabric that can pass for a tablecloth if nobody needs to see the edges), tea towels, napkins that look good on camera (they don't actually have to be OMG-expensive linen) and the like for some shots. For others, you might want to try matte- and gloss-laminated woodgrain, marble and granite prints. (That was a lot easier twenty-five years ago when you could get tacky vinyl sheeting almost everywhere in almost any pattern imaginable. A sudden and inexplicable upswing in taste among the masses has made things unnecessarily dificult for us.) You might find that a couple of different large-ish tiles of natural stone from your local home renovations store come in very handy for some shots. You can actually tile them and clone out the seams in your favorite editor if you need a bigger surface, but you'd need a sturdier table/counter than the cheap folder suggested above.

As for the grey card: you don't need anything big. A dot the size of a dime is more than enough to white balance with, and you can put it just about anywhere in the frame and either crop or clone it out.

Addressing your surfaces question, I tried a couple things before I read somewhere (I forget now) to buy some 3'x4' poster board from a craft store and paint them several colors you like then use them as surfaces and backdrops for you photos. Most of the later photos I shot here were done using my poster boards. There are some even more adventurous suggestions too that I may try soon.

One problem I think you're encountering is size. Really, you need a big cutting board -- much bigger than you have -- so that you don't need to worry about angles and cropping to include/exclude it entirely.

Look at the size of the pattern relationship to the size of your subject. The large pattern of your existing board is almost definitely not distracting when you've got a big steak or a pile of vegetables. But when shooting smaller items you want to be conscious of the pattern and I would seek out a smaller pattern/grain or a larger one. A large pattern -- shot close -- will not be distracting when shooting small items, IMO. I don't know what kind of wood a "typical" wood cutting board is made of, but I certainly know what it looks like and I bet yours is the same as mine. Others to look at: bamboo (it's got a really tight grain and so there's not much pattern aside from the stripes of aligning it), solid cherry (practically patternless and a warm slightly pink color), butcher blocks (made of many smaller blocks of hardwood).

You don't need to shop at the kitchen store for a wooden cutting board (at least, not for one for a photo setting) -- go to the hardware store and buy some lumber. You can find many nice woods in large enough pieces to make a nice faux cutting board. If you don't find exactly what you want get some stain and make it the right color!

I just use what I already have, either a nice wooden table, cutting board, or window sill. I choose the least distracting ones, that are the closest to the current natural light when I take the image.

I don't think I can comment yet on other posts, or I'd do that - but here's my two cents.

I'm not sure what the context of your photography is, whether the subject needs to be isolated or is meant to be more atmospheric, but I'd generally go with shooting it where it is, and just moving distracting bits and pieces out of the way, doing your best to minimize a color cast. Also - food is really fun to photograph!

I've used a back-lit frosted acrylic sheet for a lot of my product shots, which has allowed me to properly expose for the item, and overexpose the background. You could probably do the same with the frosted glass, but I imagine that it would be a little tougher just because of reflections.

I am not offering this an an answer but rather as an additional resource. First, I'd like to agree with @StanRogers that food often looks far better on a table or in a "normal" setting where you might ... um ... eat food.

The additional resource I wanted to add was Plate to Pixel. It is an amazing book by a very talented food photographer. One thing you might notice almost immediately is that most if not all the settings are natural. If you are seriously doing any amount of food photography, this book is one to consider buying.

Not the answer you're looking for? Browse other questions tagged food-photography backdrops or ask your own question.

11
How do I build my own soft-box light for illuminating still or stop-motion scenes?
7
What's the technical difference between artificial and natural light?