I am very intrigued by this photo. Can anyone shed some light into how this effect could be achieved?

Based on the two sample photos you linked, I wouldn't say that is a post-processing effect. It looks like all in-camera stuff. Basically, you have the following:

If there are any post-processing effects at all, it might only be a boost to contrast, which would help harshen the highlights.

Comments relate to photo1 - of young woman in street but are generally applicable to photo 2 as well. .

Central "crispness" & shadows. While "out of camera" seems likely at a glance, there are a few things that suggest either extra lighting or post processing. Fill-flash or flood may have been used to obtain a degree of emphasis for the central subject or curves may have been adjusted to obtain a sudden black level below a certain illumination level. There is nothing that demonstrates the use of extra lighting with complete certainty, but there are several very dark areas amongst the highly exposed areas of the central subject that suggest either post processing or a high level flood or flash above and behind the camera pointing downwards at a steep angle. The dark areas inside the sleeve ends, dark area between red headband and neck, shirt folds and pocket seem unlikely to result from normal lighting or natural lighting. The dark pocket line (right side as viewed) has "shadow" in the apparent opposite direction to the others suggesting either angled lighting above and below or post process. 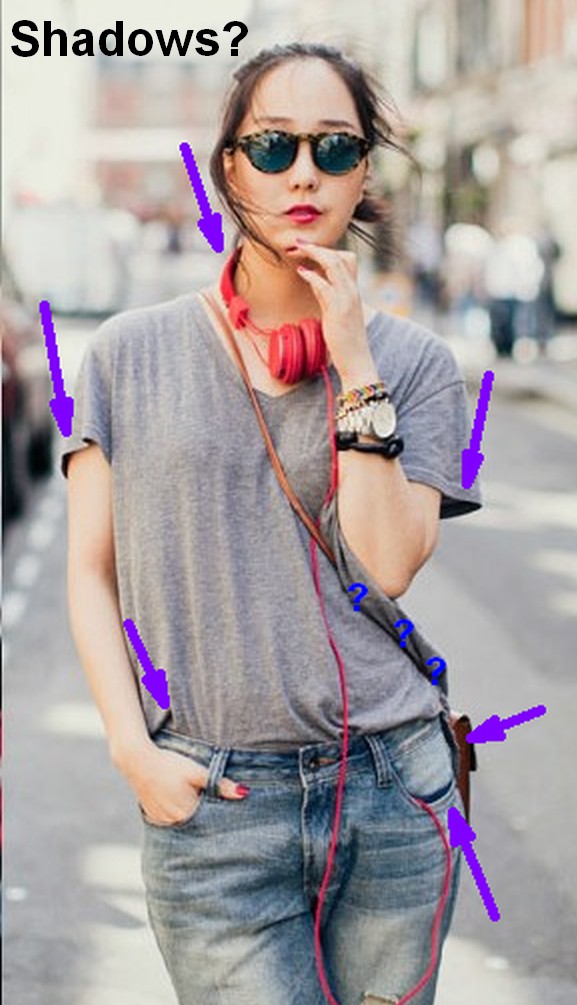 If you are talking about the selective defocusing of the image, then I agree that it was very likely to have been achieved simply by use of a large aperture to achieve very shallow depth of field. This impression is enhanced by the fact that the car in the first photo is in and out of focus about the same as the young woman and the rest of the scene is - if they had been using post processing there may well have been a temptation to defocus the car somehat to maintain the central focus.

However, effects akin to selective defocusing is are easy enough to achieve in post processing if desired. The example below is excessively rough - better masking would allow seamless results.
In the right hand image I've left the head and watch as was (more or less) and selectively blurred the rest. This was done by duplicating the image, applying "blur" to one version and then cloning in material from the original version. A more normal approach may be to use layers with a masked and selected layer of the desired areas left sharp and given priority over a blurred whole image. 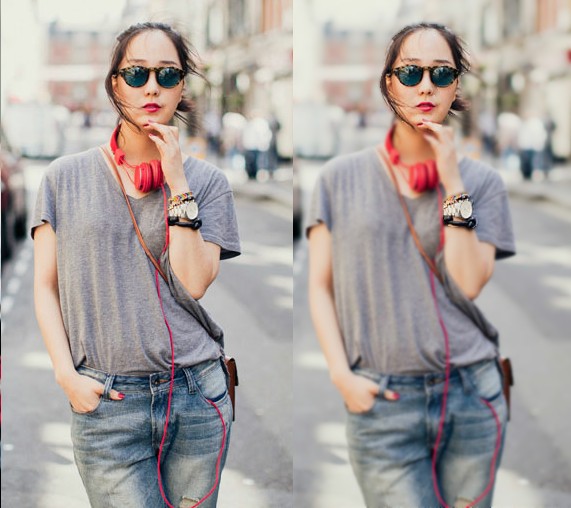 There's one point no one else here talked about and that's how to over-expose the background while correctly exposing the subject.

I believe the first picture was taken under very bright natural light (maybe even mid-day when the sun is directly above), now, to make the subject darker than the background you place her in some open shade or use a scrim (a white semi transparent fabric) to reduce and diffuse the light hitting the subject (you can find a scrim in most 5-in-1 reflector kits).

Obviously, it's also possible to get this effect by pure luck - but that's not very useful for trying to reproduce it.

Now all that's left is to use spot metering so you expose for the darker subject without considering the brighter background and to open the aperture to blur the background.

As an added bonus the diffused light in the shade or under the scrim is softer and more flattering.

Maybe the photographer also adjusted the colors a bit, the reds (lips, earphones and cord) are very red and it's possible it's the result of curve adjustments on the red channel.

It's also very possible the white point was adjusted to blow out the background (that was over-exposed in camera but maybe not by that much).

For the second picture, wide open aperture and some film grain effect in post (but I didn't look at that second picture too much because I personally don't find it interesting)

I was considering Russell's answer and looking at the copy of the picture he provided. Then I dediced to look at the whole original again and I think the lighting is actually pretty clear.

What is going on is that the subject is in the shadow of a building. The sun is high and a bit right when looking into the picture and a bit behind the subject. You don't see the sun on the subject because she is in a shadow. Parts of the background are not, which is why they appear so bright. The sky conditions were partly cloudy at the time of the shot, but the immediate area was getting sunshine.

All these things can be seen by looking at the whole picture carfully. Don't pick over supposed shadows on the subject because she is already in a shadow so what you see are effects of diffuse lighting coming from multiple directions. Look at the light patches on the street. Those are reflections of the sun off the windows of the building at left. We can tell they are from the left building by looking at the bright spot immediately behind the subject. Note the shadow of the car's right mirror in the bright spot. This also tells us the sun was behind and right (her left) of the subject but blocked by the building at right. We can see the sky conditions are partly cloudy because they are visible directly in the reflection of the car at left. We can also see a reflection of the women from behind the right rear wheel and see that there is no obvious light source, at least within the angle of view of that reflection.

So no, I don't think anything all that special was done. I'm not even sure it was deliberate. I think most photographers would want to avoid this kind of lighting, for good reason.

Not sure which effect. When I see the pictures I think: Wide aperture (blurs the background). That, and exposing for the subject properly, has blown the background in the first picture. Possibly played with the colours via curves or white balance.

13
How do I achieve this post-process effect?
1
Can someone shed some light on how the effect in this bar photo was done?
5
What is this effect called and how can I post process my photos to get this effect?
3
What is the blurred light effect in this portrait?
2
How does wedding photographer post-process to achieve this rich detailed + high contrast portrait look?
4
How can this brightly colored yet gentle pastel-color effect be achieved?
4
How is this high-key, bright cityscape effect achieved?
0
how to achieve this washed out processing effect
3
How can I mimic this solarization effect?