How to achieve good scenic photos without HDR?

I've always had a problem getting exposure right with shots of the outdoors. I always seem to need to do manipulation which ends up in noisy photos.

I know HDR would sort it out, but I'm using a Canon 5D mk1 and it's a pain to use multiple shots for later combining, as it always needs a tripod. What am I doing wrong? Shadows and highlights seem just too much for it too handle, but the 5D has a good reputation so I must be doing something wrong. I want to end up with a pro photo that has the full resolution of the original shot, but the picture below shows what most of my shots end up like. (I always take raw shots). All advice welcome

Notice that the sky and the grass are very grainy after manipulation (increasing colour saturation, and adjust curves to lighten the greenery and darken the sky) (I used a circular polariser which wasn't enough)

Pay attention to lighting and dynamic range. Daytime landscape shots, in my experience, can often have a huge dynamic range (light-to-dark), which means that no matter which part of the landscape you meter, you'll under-expose part of it and/or over-expose another. (this is why HDR helps in some cases). Note that even HDR won't make up for really harsh light entirely, because harsh sunlight also washes out color and produces really stark shadows.

Here's an example where HDR helped, but couldn't really rescue my photo from harsh lighting. This is a three-shot bracket, tripod-mounted, processed in Photomatix. I can update later with the middle exposure to show the (considerable, IMO) improvement that I got by merging three shots, but for now, notice that despite the use of HDR, there's still a "flatness" and glare to the shot. I might have seen more improvement with more shots (and thus, a wider bracket), or a CPL or GND filter, but my point is that when you're shooting in this sort of light, you're always working to "rescue" a shot from this harsh lighting. 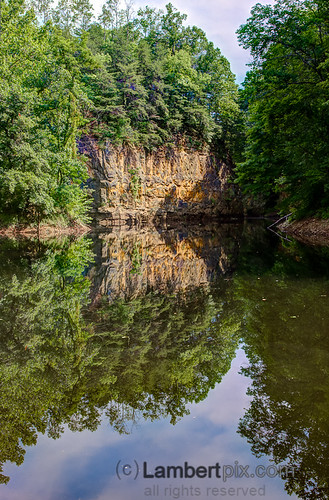 By contrast, shooting under less direct light should let you capture a scene effectively with a single exposure -- especially with your 5D, which has a much higher dynamic range than the P&S I used for the photo below. 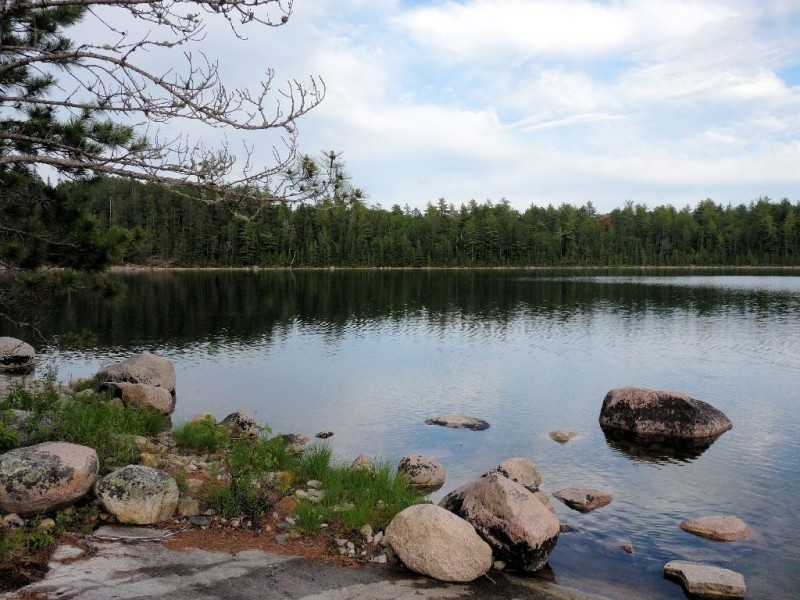 Finally, I'd suggest getting good and comfortable with your tripod, because even if it's a bit of a pain, you'll find it a great aid in any sort of landscape photography. Not only does it help you steady your composition and plan your shot a bit (which is a good thing), it'll also make it a snap to shoot brackets for HDR shots (using ghost removal, you might even be able to erase tourists from a shot like your example), and when the light grows even more dim, you'll definitely want your tripod to grab longer exposures: 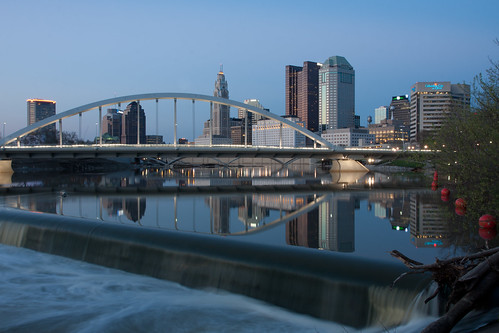 For landscape photography this is a common theme, and the historical solution with film cameras has been to use a graduated neutral density (GND) filter.

A GND filter is just like a normal ND filter, in that it decreases the light entering the lens, without altering the color of the image, however, it does so more on one side than the other. With bright skies and dark ground, you need to minimize the contrast, so you align the darkest portion with the sky.

This is an example of a GND filter, but they also come as round filters to fit on a lens.

The problem you're having is one that photographers have had since, well, since photography started. Simply, the dynamic range that can be captured by film or a digital sensor is smaller than what we can perceive with our eyes. The result is a properly exposed sky and dark ground, or properly exposed ground and blown out sky. Yes, HDR or tonemapping is a way to work through this, as are graduated neutral density filters.

Yes, the first thing I notice in your image is the noise. What ISO did you shoot at? Lower ISOs typically have increased dynamic range, which would help to combat this problem. When converting the raw image, I would probably first try to decrease the contrast to bring more of the exposure into the midtones that you want to see; next you can use curves to adjust more specific points.

Since it appears you had to do a lot of manipulation, I'm betting there was a lot of contrast in the original scene. What time of day did you shoot the photo? Shooting in early morning and late afternoon you'll find that a scene has much less contrast and harsh light from the sun, and it's much easier to capture everything.

How did you meter the scene? The evaluative meter could have been fooled by the combination of sky and both light and dark grass. You can use the spot meter to take readings across the scene -- the sky, water, light grass, and dark grass are good candidates -- to see how much deviation there is, which will tell you if you can capture the scene and you can also just how to best expose to capture it. I don't know how much lattitude the 5D has, but if it's about 7 stops at a given ISO then it's safe to say that if there's a 15-stop difference between the sky and dark grass you won't be able to adequately capture it. However, if there's a 5-stop difference you'll want to choose your exposure carefully because there's not a whole lot of wiggle room to get a good exposure.

I recently learned a new tip if you're a Lightroom user, when you select your photo, go to Develop Mode, and on the right hand side find "Camera Calibration", then choose the "Camera Landscape" profile. This really helps boost the image saturation and gives it a really nice "look".

Not the answer you're looking for? Browse other questions tagged exposure hdr shooting-technique or ask your own question.

19
How do I use Graduated Neutral Density filters?
2
how do I long expose in harsh light for a lake view?

25
How do I photograph moving subjects to allow good HDR processing?
4
How to take HDR photos?
4
How to do HDR with long exposure photos?
0
Is it possible to take HDR-photos straight out of camera?
2
Why did exposing for the highlights and raising shadows in Adobe Camera Raw result in so much noise?
1
How do I shoot HDR portraits without the HDR glow effect?
11
Why are my sky photographs coming out dark?
4
How to set optimal exposure times before creating HDR image?