I'm wondering how sensor sizes are calculated. The Sony RX100 reportedly has a sensor size of 1" which is 13.2 x 8.8 mm according to the press release and various sites.

How does that work? That's a pretty small inch.

The Wikipedia page on sensor sizes has this chart: 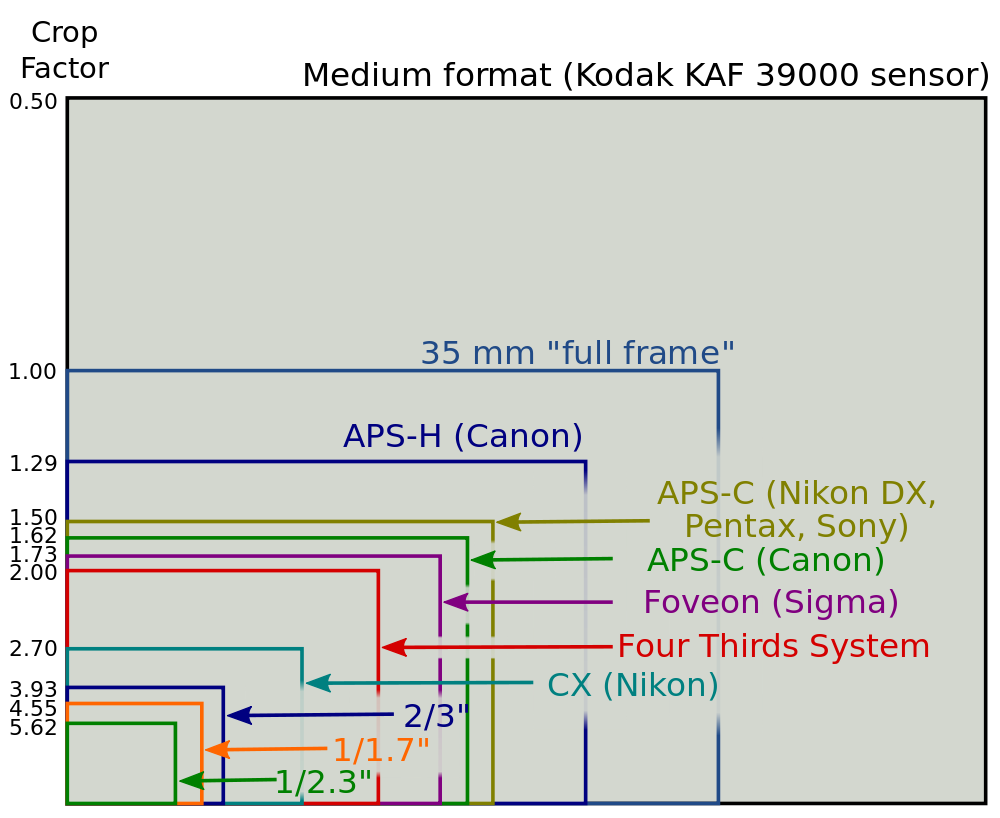 which doesn't really help. (The 1" format is labelled Nikon CX. Chart by Moxfyre under the CC-BY-SA license.)

If full frame/35 mm refers to the horizontal size, what does 1" refer to?

Digital camera sensor format-size names have their roots in television camera tubes. These were measured in inches diagonal, but for various practical reasons, the entire circle isn't used. So, from way back then, there's a concept called "the rule of 16", which says that the usable, actual sensor diagonal for a 1" tube is 16mm. (Yes, it mixes imperial and metric measurements.) So, for each "inch" in a sensor format designation, translate that to approximately 16mm of sensor diagonal. Or, for formats smaller than an inch — very typical, e.g. 1/2.5" — use the corresponding fraction of 16mm.

This rule matches the 1"-format designation for this sensor: 13.2mm × 8.8mm has a diagonal of 15.9mm, and you can see how it roughly applies to the other typical compact digicam formats as well. Usually, there's a little variation and sensor-makers round to the nearest somewhat-standard fraction, but occasionally, as with the 1/1.83" Nokia N8, a very-specific number is given, in which case it's almost certain that they're following the 1" = 16mm rule literally.

More background in this archived article.

Confusingly, 1" does not refer to the size of the sensor, it is instead a "type designation". The 1" refers to a certain size of TV camera tube, of which the usable image area occupied the inner two thirds. The use of such cameras is completely obsolete now but the sizing system remains.

It's arguable whether this is due to doggedly sticking to tradition or an conscious attempt by manufacturers to make it seem like their sensors are larger than they actually are. Probably a bit of both.

2
What's the relation between sensors measured in inches and milimeters?
0
What does sensor size 1/5.8" mean?
0
Calculating the sensor size or pixel pitch of the Logitech BRIO 4K Webcam?
8
How do I choose a point and shoot camera under $400?
12
How to calculate the FOV in degrees from focal length or distance?
7
focal length and sensor width of a phone
8
How to estimate pixels per degree for an image from a camera phone using EXIF data?
7
What are the connectors like on a "standard light stand"?
3
What is 'sensor height?'
1
Query on focal length of Canon SX520HS
See more linked questions

53
Do megapixels matter with modern sensor technology?
12
Why don't comparisons of aperture take sensor size into account?
7
How do you determine the acceptable Circle of Confusion for a particular photo?
3
Is the formula for object image size given focal length, etc. independent of sensor size?
2
Does lower resolution result in better signal-to-noise ratio, given the same sensor size?
3
Transition between different film/sensor generations
0
Sensor size of Sony HDR-HC7e
2
For the same FOV and f-stop, will total luminous flux increase linearly with sensor area?
2
Lens for 1 inch sensor format does not seem to cover the actual sensor boundary