What unique techniques can I use for shooting fireworks?

What settings should I be using to photograph fireworks? covers some of the basics of taking photographs of fireworks, but what special techniques can I use shooting fireworks? I heard about this one where you use bulb mode and use a black sheet or t-shirt to cover the camera.

The only technique I can recommend with certainty is experimentation! There are no hard and fast rules.

Bulb mode is useful if you want to go past your camera's maximum exposure time, typically 30 seconds. If you don't have any foreground light sources, i.e. you're pointing at the sky, or the foreground is unlit, then you can pretty much expose as long as you like as without worrying about overexposure as the fireworks stop giving off light right after they go off. A longer exposure allows you to capture more bursts in an image. If you want to do long exposures with foreground lights then you might need to use a graduated ND filter upside down.

Covering the camera with a t-shirt or cloth is used to prevent stray light entering the camera through the viewfinder. It's only applicable for SLRs/DSLRs. I find a bit of black electrical tape is more convenient.

If you are already quite familiar with your camera then I can suggest the following link: http://www.kenrockwell.com/tech/fireworks.htm

I have found with experience that manually focusing is the best way to ensure that you get the fireworks in focus. If you have the time try focusing manually on the firework display at the begining once it starts. (i.e the first 1-2 explosions)

One thing that I found helpded produce better images was shooting in portrait mode to get the path of the firework as it reaches in to the sky. I have also held open the shutter at the end of the display to gte colour in to the sky (around 15-20 seconds longer depending on how dark it is).

Bulb mode is recommended in situations in which you don't know the exact time of the firework's existence..

Some Common tips for Firework photography are as follows:

I normally shoot fireworks using a wired remote cable release and the camera set to 'Bulb' mode. The shutter opens when either the camera's shutter button or the button on the remote is pressed and closes when the button you used is released. I always use a tripod to shoot fireworks (unless I didn't know I was going to be shooting fireworks when i left my car and walked a mile to the airshow several hours earlier). This allows exposure times in the range of about one to five seconds. 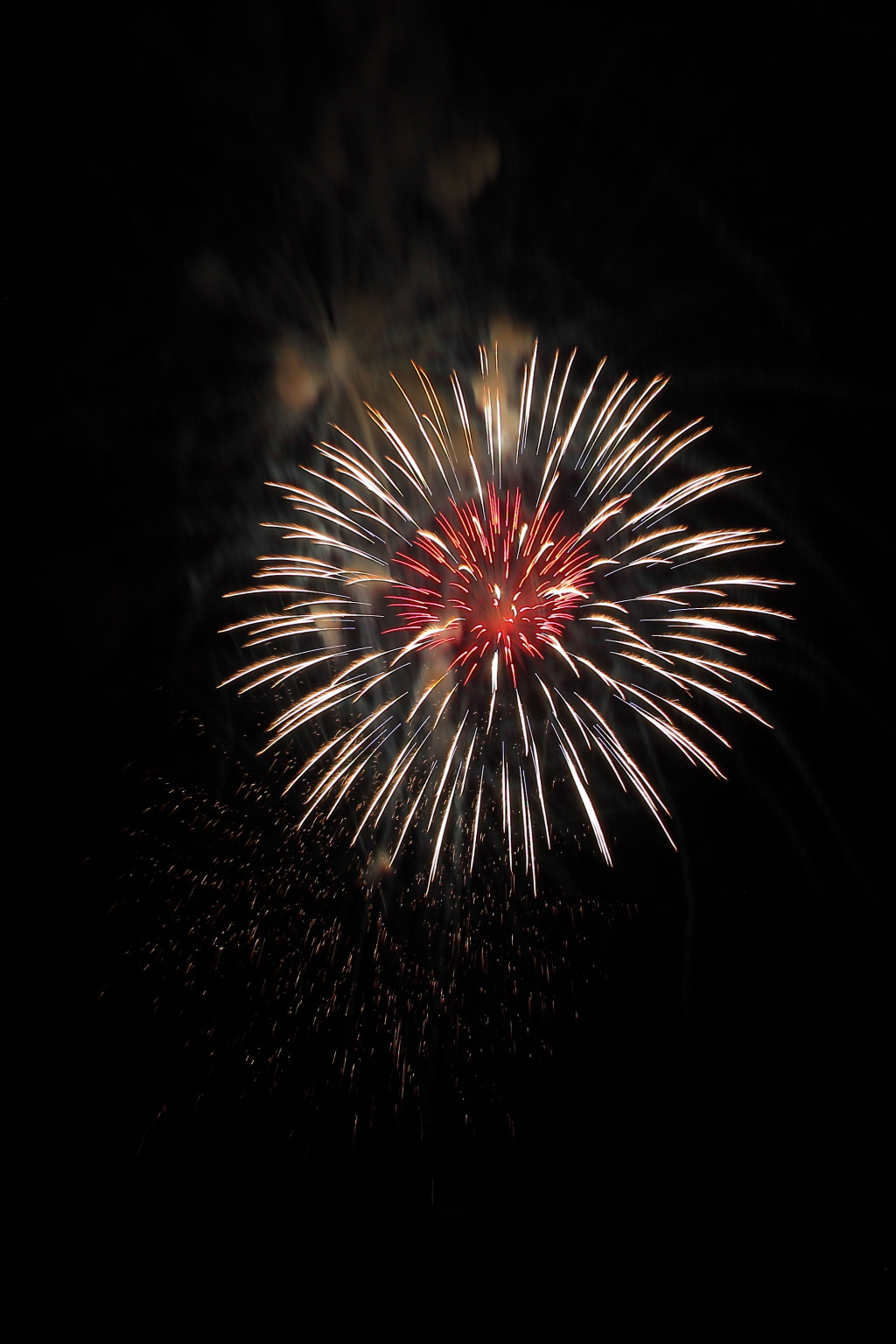 Sometimes, if there are multiple burts going off at once, like in the "big finish" of a professional display, you'll go ahead and close the shutter before every burst spreads completely out to prevent areas with multiple breaks going off very quickly from washing out those parts of the frame. 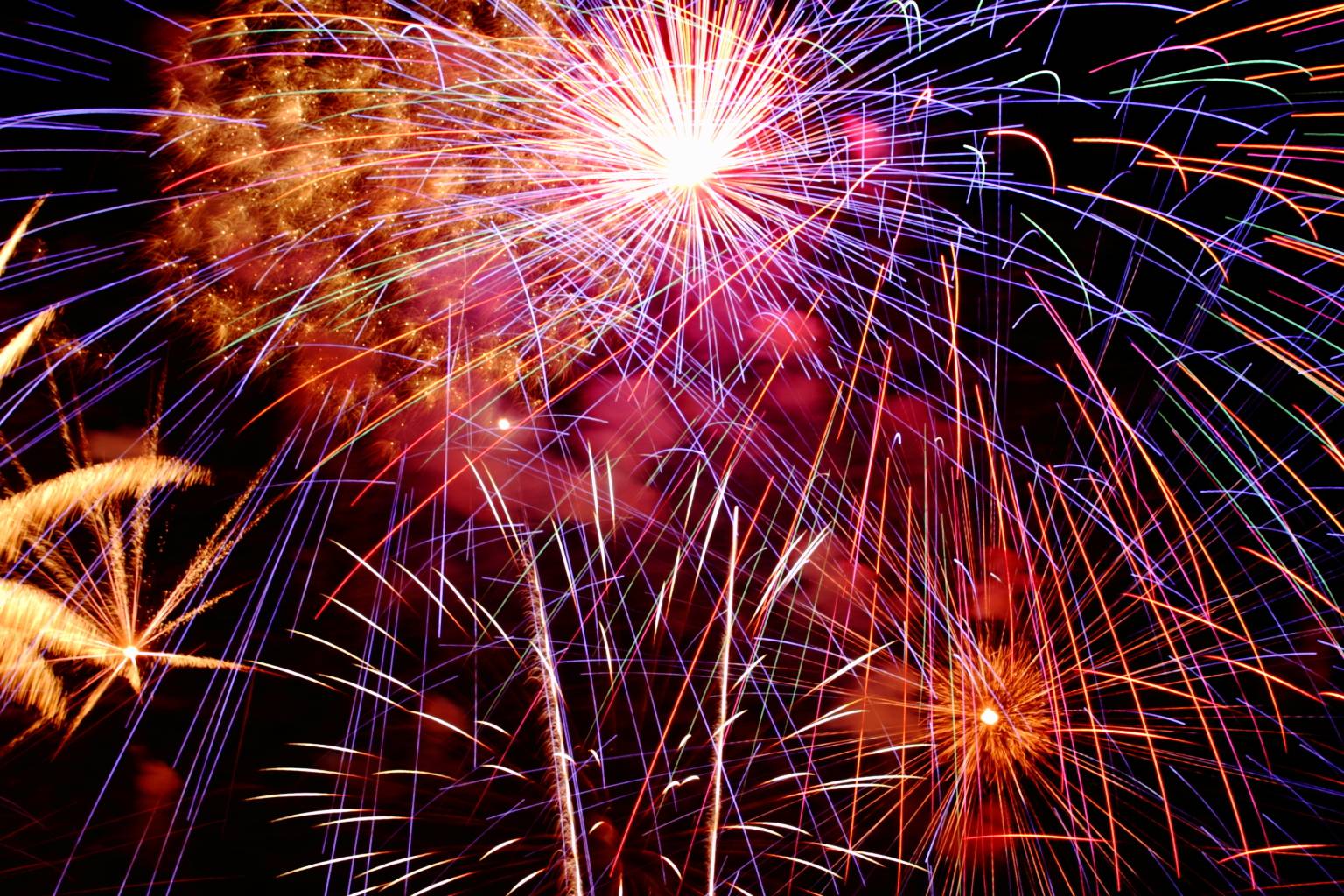 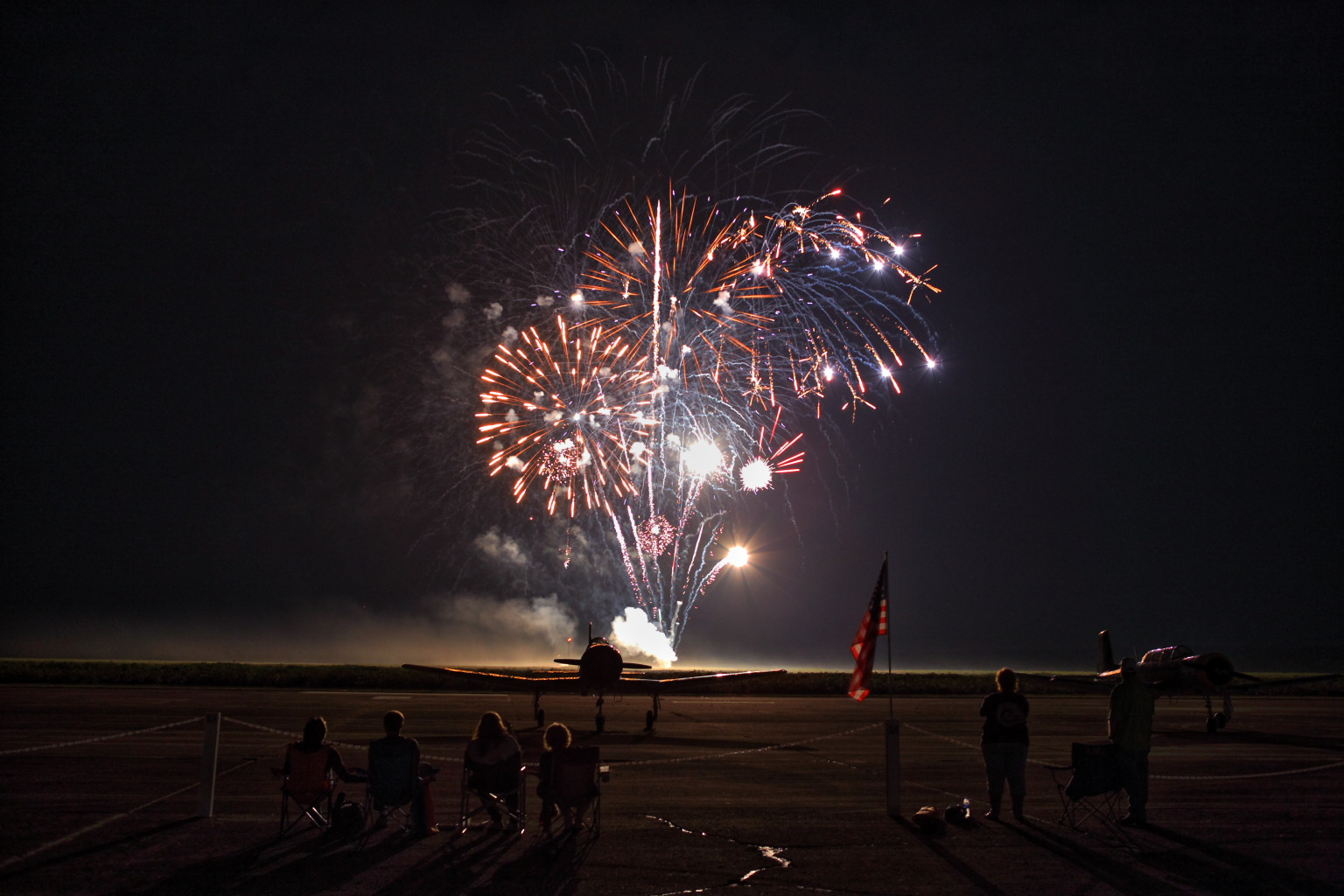 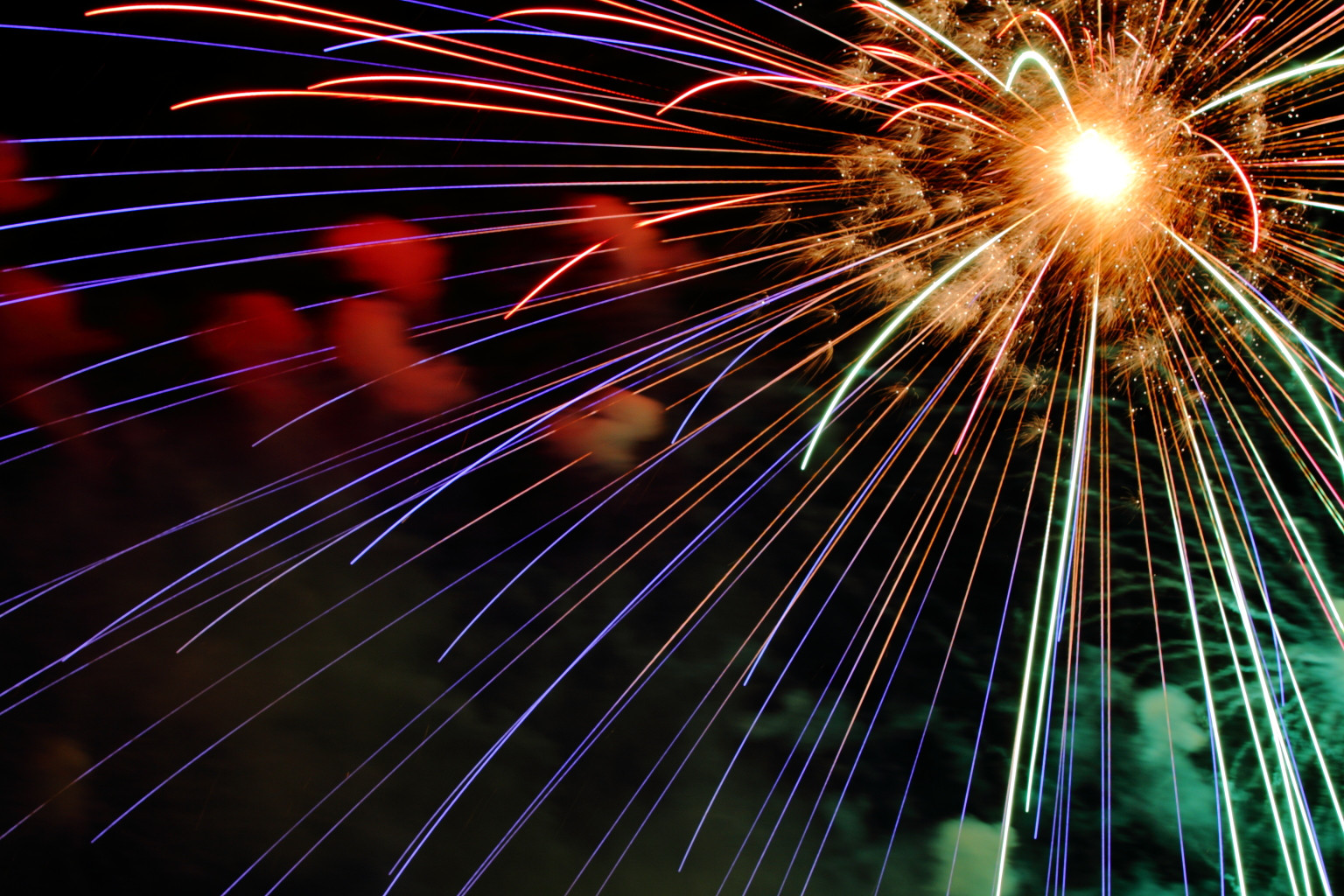 Catching the very end of one burst and the very beginning of another can be fun. I called this one 'Hyperdrive Tractor Beam.' 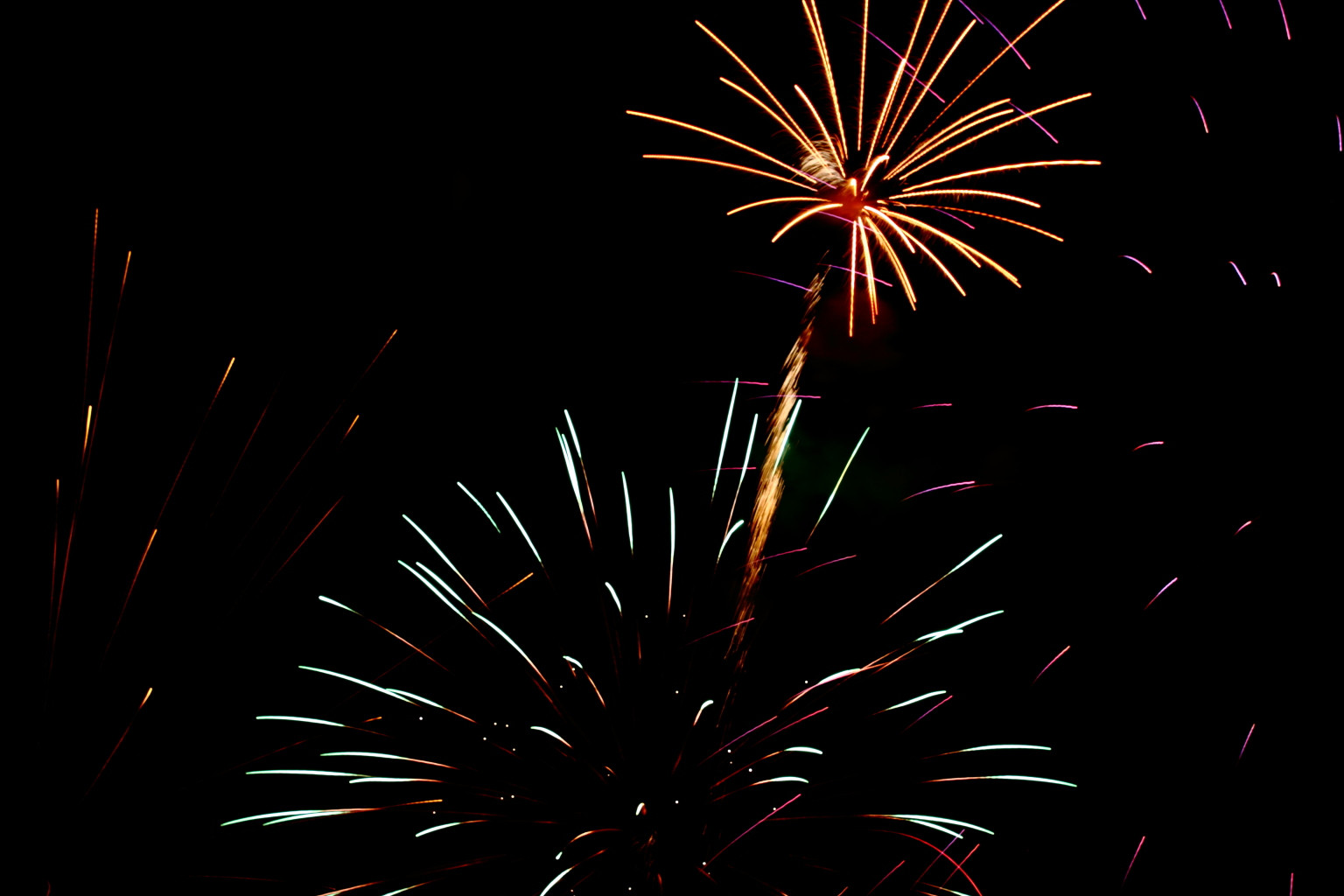 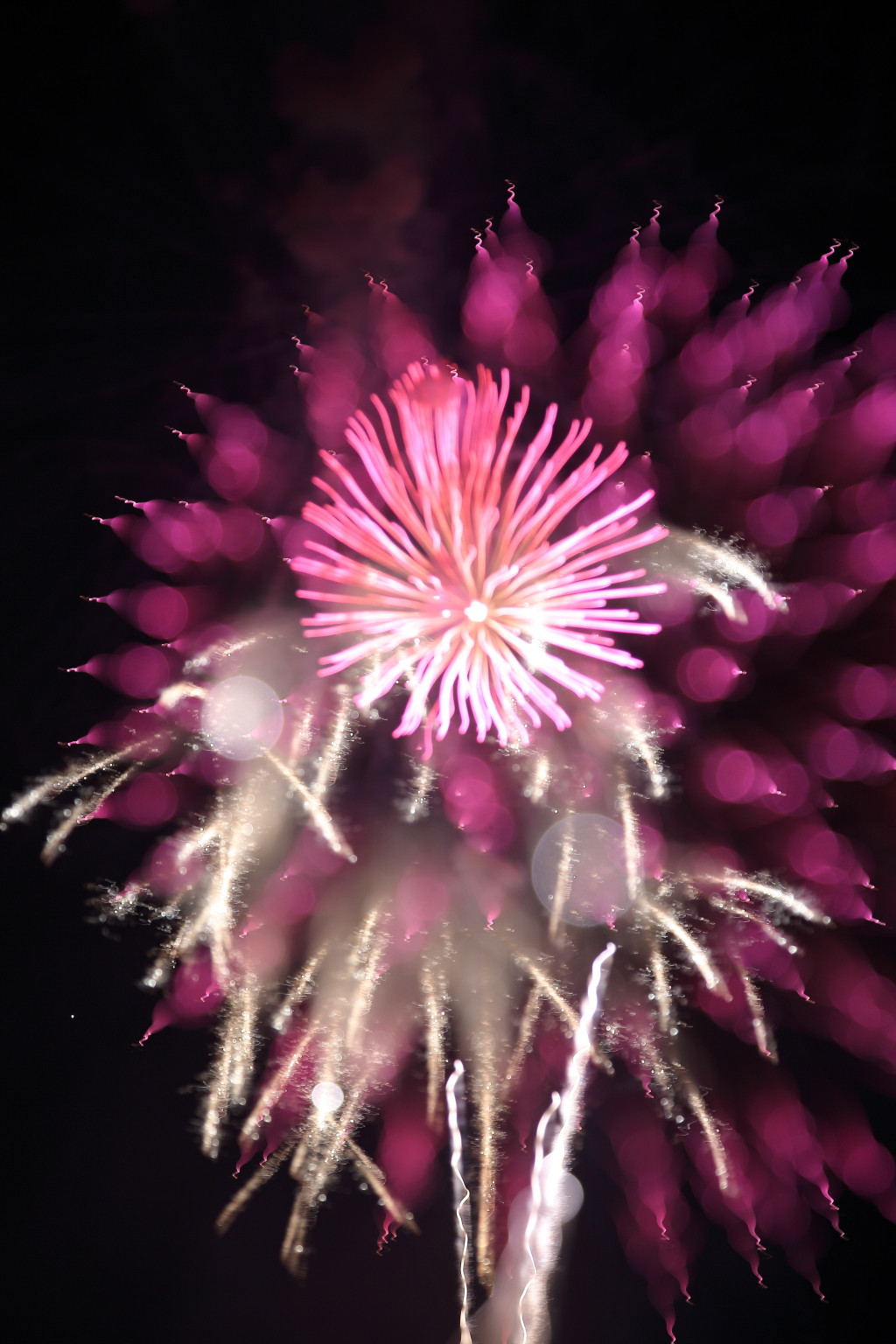 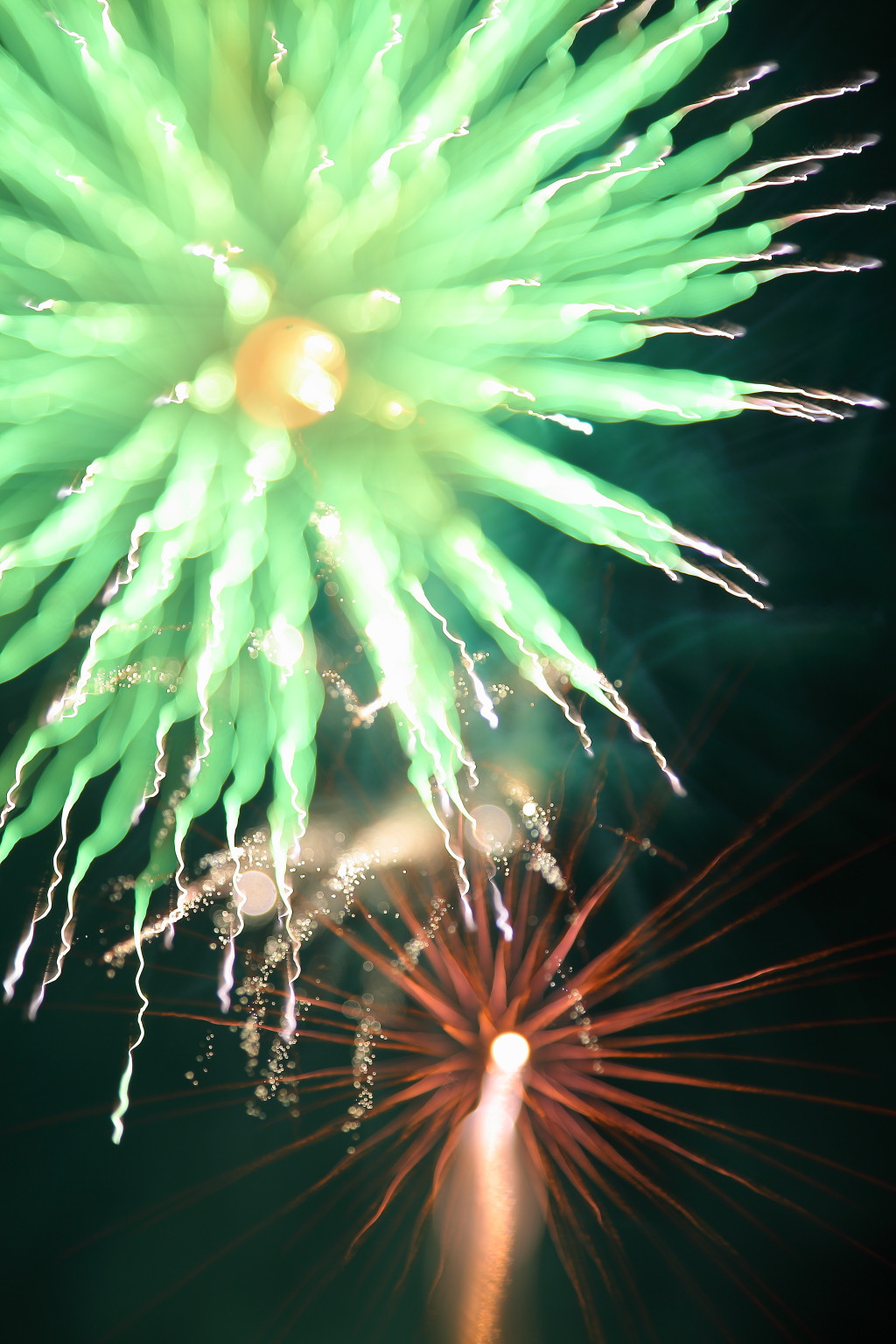 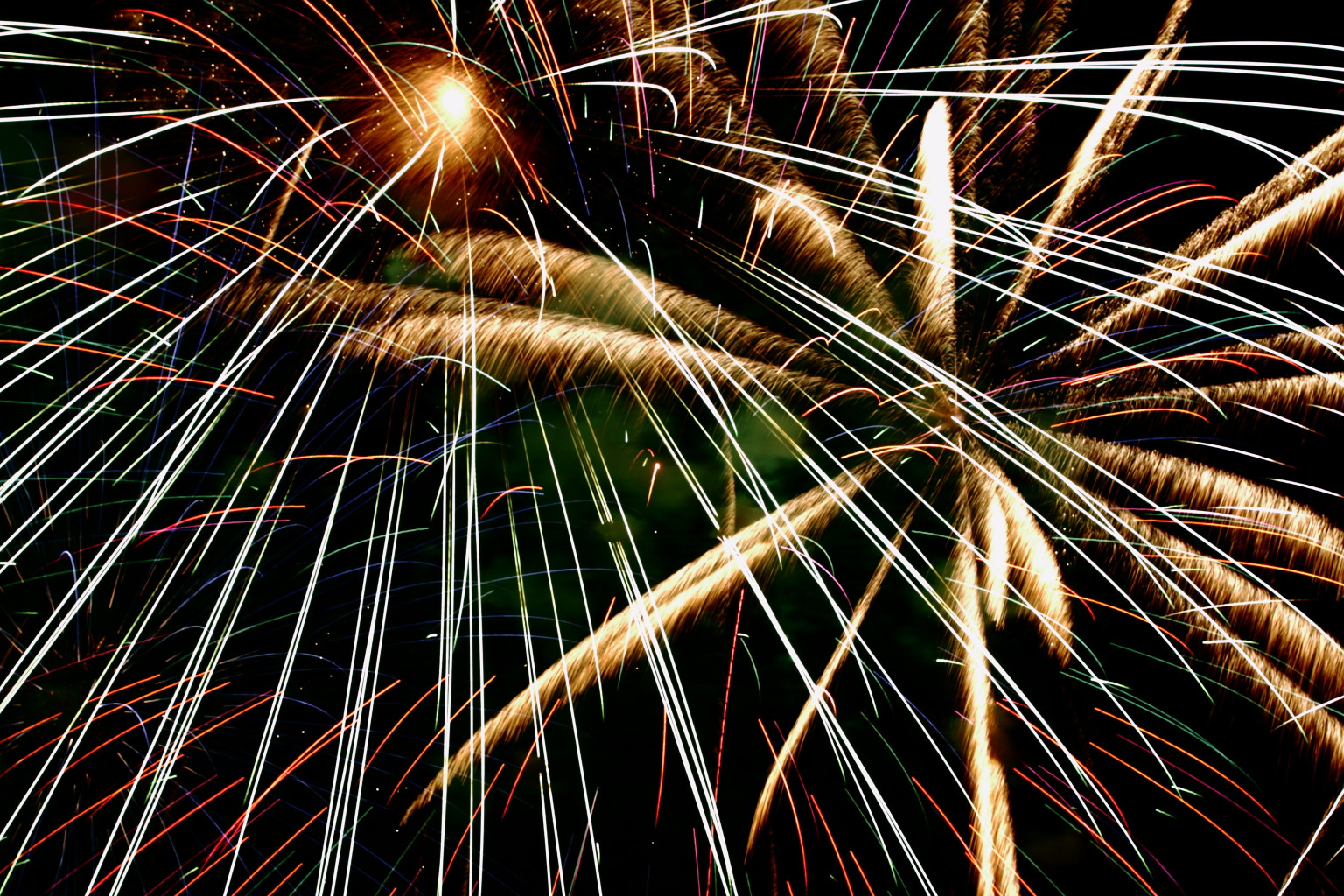 Being after the 4th I realize this answer might be coming little late, but after finishing my first time photographing fireworks I thought putting an answer in here would help.

Good support means clear images. Granted I was standing on a beach, so keeping the amount of movement around the tripod while the camera was exposing to a minimum was important as well. I use a TVC-33 and BH-55, both from the excellent folks at Really Right Stuff.

I used a wide angle lens (24mm) manually focused to infinity with a small aperture (f/11 on most, but changed it up in for a few). I had a remote that I dialed in a set exposure time into and then just anticipated shell bursts in the sky.

I liked the idea of getting a bunch of fireworks all in one shot, why not go for a 10+ second exposure? In short it gave too much “stuff” in the picture. You get smoke showing up from previous fireworks, overexposed portions because some other flash gun style fireworks are going off during the exposure, and generally it didn't feel as clean as I wanted it to be. I ended up using a lower (1-3 second) exposure time and then doing some adjustments in Lightroom to push the background even darker and expand some of the tones in the fireworks.

Just play with it. Assuming you have more then 15 seconds to take pictures there is plenty of time to play with adding other variables like an ND filter for even longer bulb exposures. One thing I didn't try that I wanted to was using a longer focal length lens and trying to put the focus directly on the center of the shell. Unfortunately that was more trial and error then I wanted to do my first time shooting.

An image I shot: 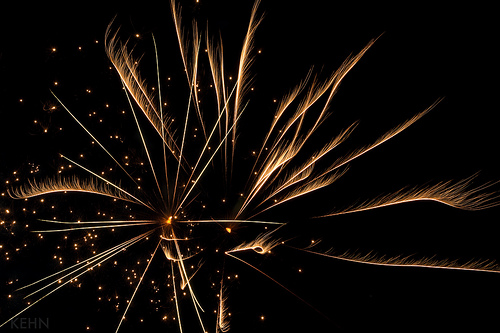 General rules for eliminating vibrations apply here: get a remote trigger for your shutter, use a sturdy tripod, and (if you're really paranoid) shoot in mirror up mode to minimize mirror slap/shutter shake. Self timer can be used but is difficult to time correctly. I've used a wireless remote trigger with bulb exposures and it works great - on mine you hold it down for about 5 sec to start the bulb, and press it again to stop.

If you want a shot that mixes fireworks and stuff on the ground, you may find it easier to shoot them separately and merge them. One common trick is to shoot fireworks over water to get reflections. I also wouldn't rule out creative merging of multiple fireworks shots into a single composition.

Not the answer you're looking for? Browse other questions tagged shooting-technique fireworks or ask your own question.

26
What are some techniques for hand-held image stabilization?
28
What settings should I be using to photograph fireworks?
1
What techniques are there to get focus and/or lock exposure other than center, half-press, and recompose?
4
Metering mode for fireworks shooting
0
What technique can I use for shooting pet birds in cages?
2
How to shoot an event in a long living room with a large french window on the shorter side?
3
How to minimize/avoid purple fringing before/during shooting?
2
What techniques can I use for shooting vertically from a height of 12 feet?
8
How can I improve my fireworks photography?