I am a pretty novice photographer, and I just shot some pictures of my 9mo baby girl outside next to our garden. This was my first shoot outside that I want to really make the pictures special.

Here is a low res version of the shot: 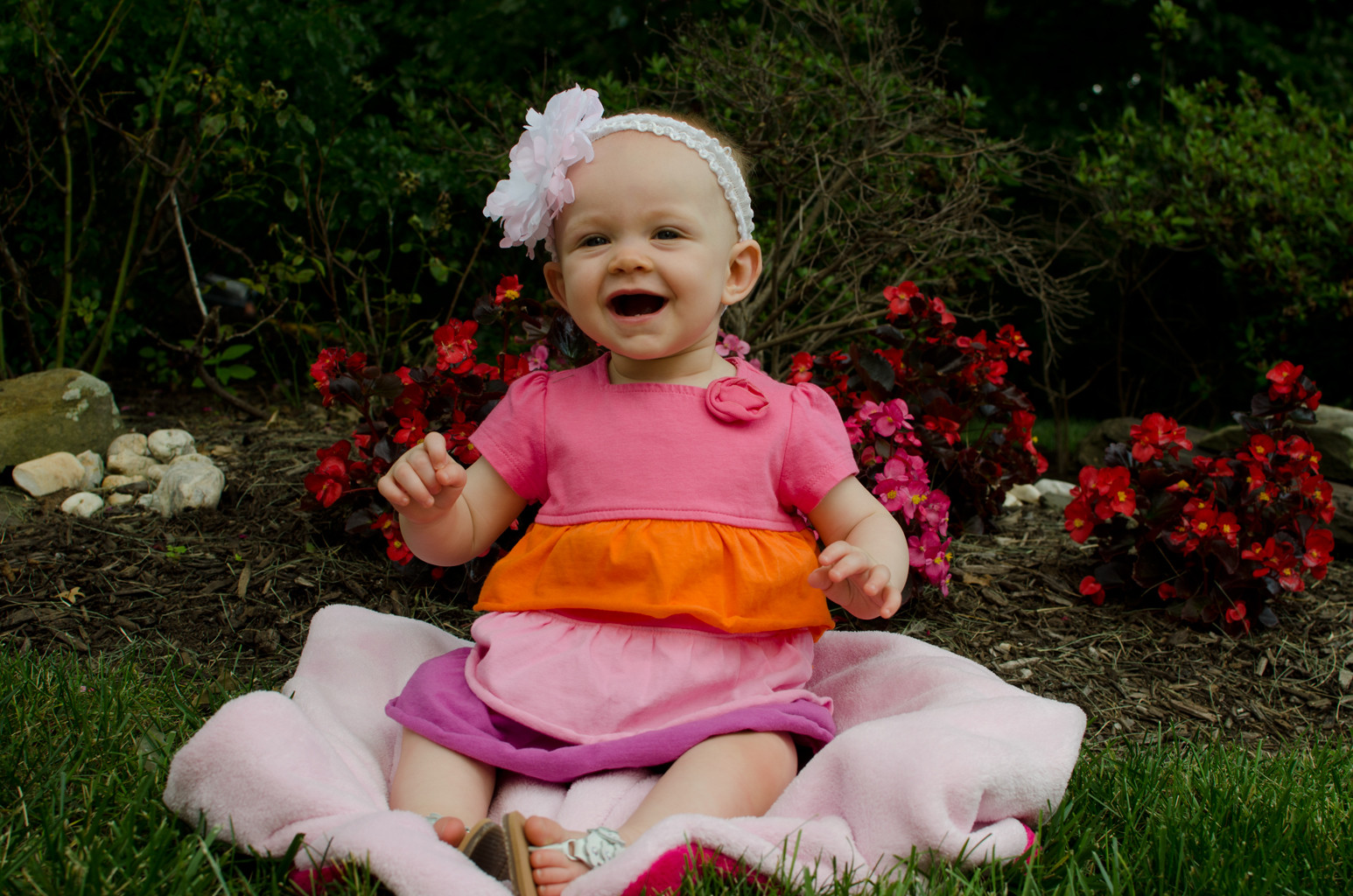 It was shot w/ 35mm lens on a nikon D7000. I haven't cropped, color corrected, or anything like that.

I have the RAW picture on my harddrive and PS CS 5.0.

For shooting outdoors, your going to have a lot more variables to consider when shooting the photo itself. Get it right in the camera. Review the histogram anytime the lighting changes. While exposing on the dark side is better than light, this is something that could have been improved when taking the picture and can come back to bit you during post. A glance at the histogram would have flown some red flags here.

When working outdoors, you will also have a lot going on with your environment that you don't have to deal with in a studio. If you are running a decent amount of MP (15+), step back and get a little more breathing room around the subject. This will give you options for cropping once you get to post. Often you will find something in the image that you didn't realize was either included or cut-off and it's always safer to include more in the photograph than less.

First thing is white balance. If you don't have an 18% grey card, find a neutral color to white balance against. The best solution is to shoot raw so you can do this in post. Next would be exposure. Properly expose the subject first, don't worry about the background. Next you can drop into items like saturation, contrast, curves, highlights, shadows, etc. Get one where you like it, and move on to the next. They will impact each other so you might be going back.

For infants, many photographers drop saturation and clarity slightly, but this depends on your preference. You have a busy background, so you may want to consider some blur on the background since the bokeh didn't come out strong. As @ElendilTheTall suggested, a vignette would bring out the subject more.

Almost every post production artists does some work with the eyes. You'll wan't to get some color out of them and brighten a bit. A brush with saturation, exposure, clarity, and contrast can go a long ways. Lightroom comes with one that is a starting point, but doesn't drive it home quite out of the box. The white of the eyes needs to be cleaned up as well.

The last step you should do is sharpen. Even though you may want a soft dreamy look, a good unsharp mask can really help.

If this image is in RAW, I feel it is salvageable. The only concern is the darkness of the eyes. Even a carefully used on-camera flash can make a difference in the eyes.

Regardless, the client will probably love it. Their biggest concern is a capture of the expressions and cuteness in a good picture. Great quality post is secondary to them. Not giving you an out, just trying to ease some stress.

Whether the photo is taken outdoors or indoors doesn't really make much difference to the post-processing. The main difference you may encounter is white balance, but that is easily corrected in ACR. So really you are just doing the same things as always - exposure, contrast, sharpening, denoising, and cropping.

In this case I would definitely boost the exposure somewhat, as it's a bit dark. The flowers and lawn aren't adding much so I'd crop them out and add a slight vignette, then do an overall sharpen in ACR and a more selective sharpen (just the eyes) in Ps before export.

Not the answer you're looking for? Browse other questions tagged post-processing workflow outdoor baby-photos or ask your own question.