Why is the Fluorescent filter for a flash green?

Balancing for fluorescent lights is harder than say tungsten. The reason for this is that tungsten bulbs produce the same sort of spectrum (set of intensities at different wavelengths) as a daylight balanced flash, just shifted.

A fluorescent light doesn't have the same bell curve shaped spectrum, it produces a set of spikes at very particular frequencies. In particular there aren't many spikes in the red part of the spectrum. The reason you don't see a green tint is probably that the brain is filling in the missing information for you.

Using a green gel on the flash allows you apply a magenta colour tint to your image (to cancel out the green) which helps restore some red that will be missing from the fluorescent lit skintones.

You can never fully replace the missing frequencies with fluorescent lights, and some are much worse than others, for example sodium lights produce very few frequencies, no matter how you try and adjust the colours, there's no information there to recover.

Here's an example of an incandescent light source (a fire!):

Now because this source produces a similar spread of frequencies as the sun, albeit shifted toward orange, we can correct this to a achieve a daylight white balance:

Now let's take a shot under the worst kind of fluorescents:

It looks orange like the first shot. However, even if we shift the image by the same amount we don't get any colours, they simply aren't there in the first place:

So while the filter may help you take out the slight green tint that results from missing certain red frequencies, it wont replace certain colours that are lost.

Fluorescent lights are good for the environment, but terrible for photography. There is hope however, newer designs are improving the width of the spectrum, as defined by their CRI (colour rendering intent) number.

I think in this case, a diagram or two is probably the easiest way to get the point across.

A typical "cool white" fluorescent bulb produces an output spectrum something like this: 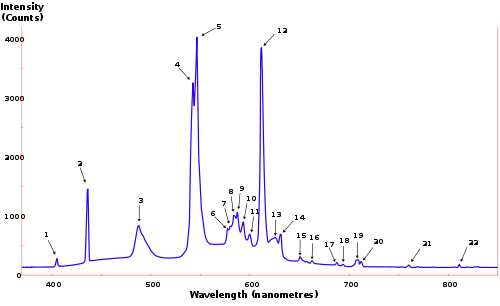 In this diagram, blue is to the left, green in the middle, and red to the right. As other answers have already pointed out, your eye/brain can/will adjust so you usually see the dominant light as "white", almost regardless of its actual color (unless the spectrum is really narrow, like sodium vapor or mercury vapor bulbs produce).

To avoid that, the green filter on the flash shapes its output to be at vaguely similar to the fluorescent light's. With a typical filter you won't get the spikes of a fluorescent output, but might get something more like this (the black line overlaid on top of the fluorescent spectrum). 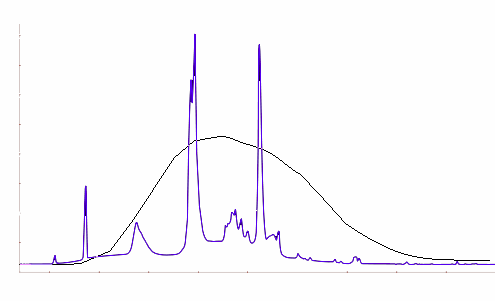 You won't get (and generally don't want) a perfect match, but this will at least let you get something approaching an even balance across the entire picture.

I should probably add that I've probably exaggerated the height of the "peak" in the middle of the output produced by the filter. You're not really trying to match the height of the spikes, but the approximate energy output in that general region. Tall, narrow spikes mean high brightness at a specific wavelength, but not all that much overall energy.

The key words in your question are "to my eye". The human vision system is fiendishly good at adjusting white balance. Fluorescents are anything but white, but your eyes perceive them as white nonetheless.

If you look at some nighttime photos of a cityscape or a building exterior, photos with a lot of different light-sources visible, you will see that most artificial lights have a dramatic colour cast. Incandescents are orange, fluorescents are - yes - greenish.

This is really a technical comment to accompany Matt's answer, not intended as a complete answer - others do that well enough already.

Matt did a nice job of colour correcting the firelight scene :-) !
A look at the luminance and RGB information of the original show a very sorry looking light mix which he has redeemed very nicely.

The orange lit street and tree version is actually lit by a Sodium vapour lamp which excites Sodium vapor to emit light at essentially a single spectral line (for practical purposes). The result is worse than fluorescent - the principle is the same - with fluorescent you have a limited number of spectral lines available and colours in between spectral peaks are not matched by light in the source.

Fluorescents try to produce light which the eye-brain sees as white with a limited mix of colours produced by reradiating visible light from phosphors excited by the tube's native UV. BUT with sodium vapour lights the overall aims are high efficiency and good visibility with colour rendition being a non-issue, so they have an almost monochromatic source. With fluorescent there is "not really enough spectral content to properly restore the tru balance". With gas discharge based light, there is about zero spectral content away from the main emission line. Which is what Matt said :-).

Not the answer you're looking for? Browse other questions tagged flash lighting fluorescent color-green or ask your own question.

18
How does the colour of ambient lighting affect colour rendition?
9
How did Matt Grum color correct the images in "Why is the Fluorescent filter for a flash green?"?
4
What is the purpose of an orange filter that comes with Canon flash?
2
How to restore color of wood photographed under fluorescent lighting?

6
Why does the lighting sometimes differ between the two images when taking stereoscopic photos with my 3DS?
21
Why do animals get green-eye?
3
Is a fluorescent filter worth using, and how and when?
4
Nikon D800 Wireless i-TTL range
3
How does light quality vary between fluorescent (CFL) and incandescent?
3
Why do my fluorescent studio lights change color of the objects in my photos?
2
Why is the white balance so different when using daylight bulbs?
0
Does the d7000 have a problem with green tones?
2
Why is my external flash (speedlight) not working on-camera?
5
What is a good general filter to use on a flash to compensate for fluorescent lighting?