Why are my city night pics more blurred than I expect, and what can I do about it?

I have taken some photos of my city at night, and while the shots are ok... upon zooming in just a little you can see many lights are blurred and just not very sharp.

I used self timer and there was no wind, and I was on on stable ground...

I used auto focus on something in the middle frame... and this lens has no stabilizer, so that didn't come into it.

The effects I get are ok — he water in the river is very glass-like, which I love, and the colors are ok... but it's just a touch dark maybe — and just not **sharp*.

The only thing I can think of is mirror lock... and maybe focusing with live view... 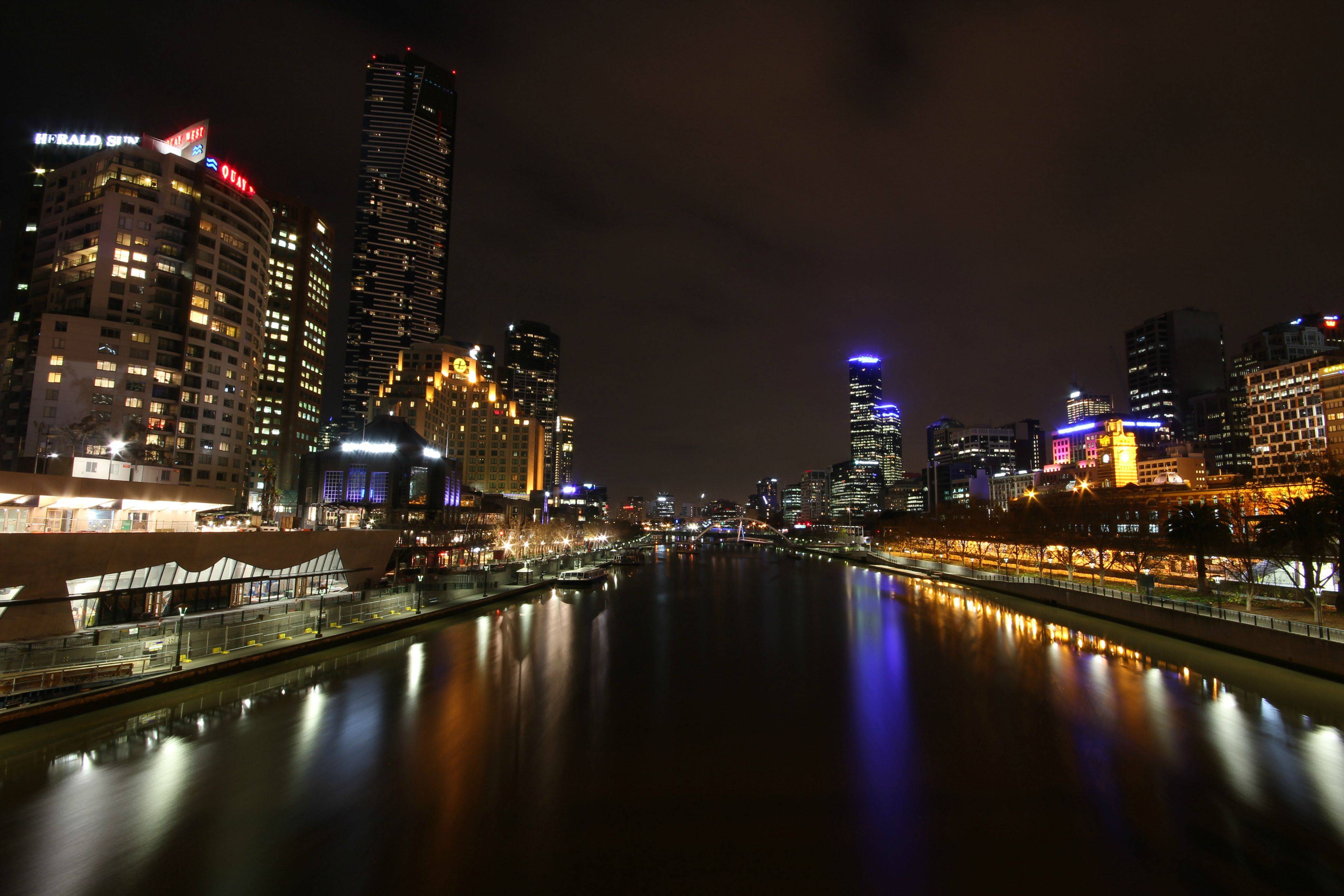 One possible explanation is that you're seeing the effects of diffraction softening your image at f/16 but since you also tried at f/6 and still got soft results it must be something else.

Mirror lockup won't affect a 25 or even 6 second exposure - the vibration die down quickly thus the percentage of the exposure during which the camera is vibrating is small enough not to affect the result. It could be simply that your images are slightly out of focus due to slight miscalibration of either lens or camera. This can be worked around by focusing with live view at 100% magnification (as you suggest).

After looking at the image, I don't know the 550D or Sigma 10-20 very well but that doesn't look too far off what I would expect for an ultra wide on an APS-C body. It's not tack sharp but with night photos you get a lot of flare and haloing as you're shooting into the lightsource(s). There's also a lot of JPEG compression artifacts either from imgur or you camera which does help. And possibly a little diffraction and/or lens blur if the focus wasn't spot on.

The bottom line is, I don't think there's anything wrong with the image - you've just fallen into the trap of viewing images at 100%. I think what you've captured there will look great in print.

The biggest piece of advice I can give about night photography is don't do it at night! You;re just making things much harder.

The best time to shoot is during twilight, where artificial lightsources show up, but when you still have enough daylight boosting the darker parts of the scene, taming the dynamic range. The best part is shots under these conditions still look as if they were taken at night!

See this example, straight out of camera, no HDR going on:

I think that you can be pleased with the overall result given the equipment that you are using. You are fighting against effects which are unbeatable without cheating and compromise. If you want substantially better you need better equipment or you need to "cheat" or both.

There are several apparent affects at work here.

As Matt says, there are substantial JPG compression artefacts. The original file from imgur was 750 kB suggesting it had been compressed substantially somewhere along the line.But, this is probably not a major contributor. 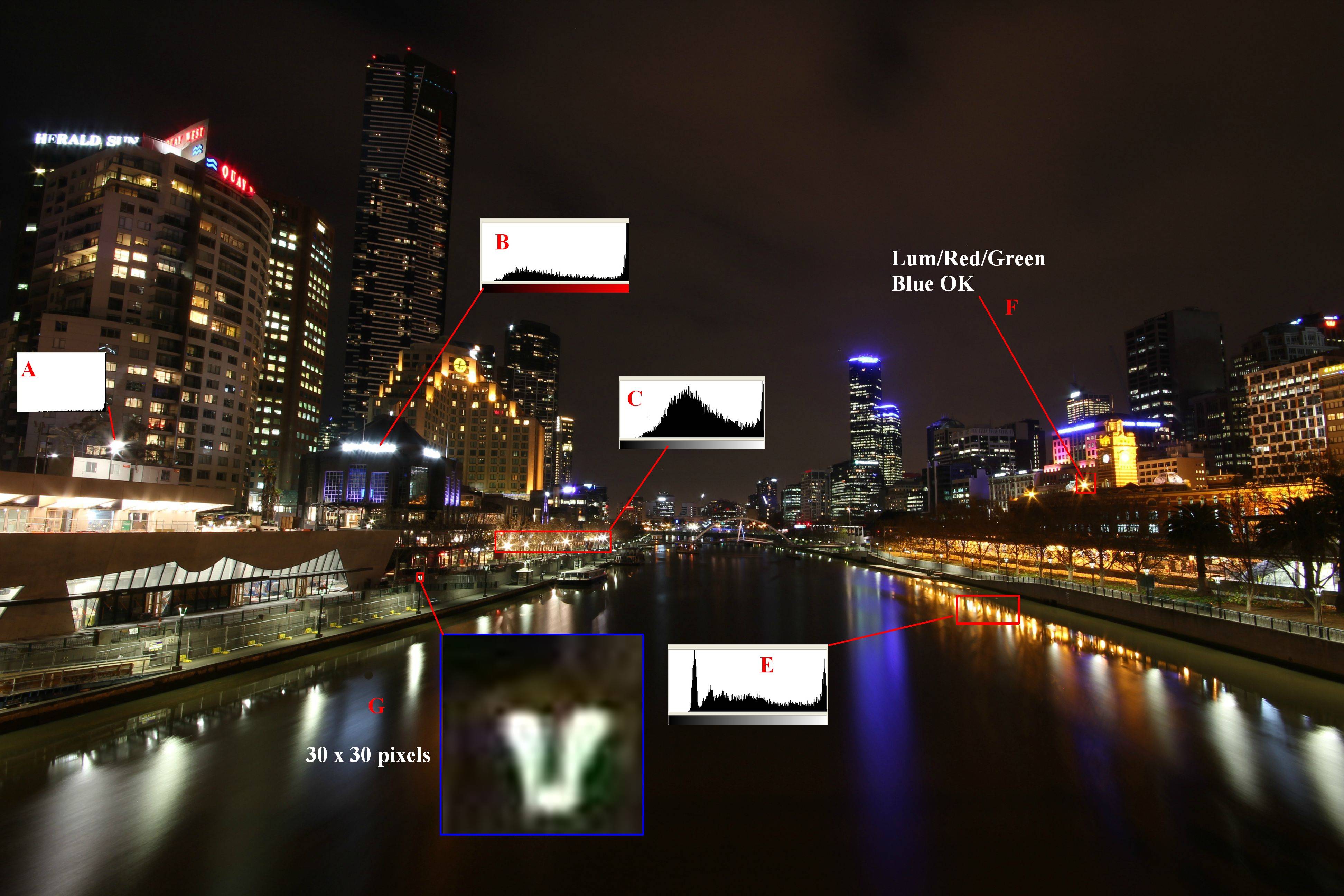 Camera needs to be set to produce max-everything. RAW if using RAW. Best possible jpg if not. EXIF or at least core data for this particular image would be useful.

See note G on image - the streetlight has been blown up to show the detail. That's a 30 x 30 pixel original as it came to me. There is not enough detail there for the light to be expected to be much sharper than it is.

You cannot expect "genuine focusing" of original material if the highlights are fully saturated and detail is destroyed.

This is an unavoidable result if you want to render a picture with such wide dynamic range and achieve an eye pleasing result without resorting to HDR, tone mapping or magic in general. Notes A. B. C, E show histograms of small areas.

The light at A has a nicely blown spot of 100% white ijn place of the light. The brain accepts that without much complaint.

The light at B also has it's max level fully saturated - red channel shown here - but has a very large component of output across the range. (What the histogram shows depends on how much surrounding dark gets included - but it's clear that "tone mapping" or HDR or in camera local contrast management (DLighting etc) would render this better if violently enough applied.

I included C to show that a line of lights with surrounding moderately lit areas has much full saturation even though this is not necessarily obvious at a glance.

E is on the river reflections - the brightest spots are saturated.

I looked at F to see if some sort of filtering might help the lights. Blue is well down but red and green are well saturated in the centre.

Overall it's a nice image.
It would arguably tolerate a somewhat reduction in total exposure and this will help some of the more blown highlights - but only somewhat.

This is an example what HDR is made for (an opinion, feel free to disagree :-) )- tastefully used, possibly with manual control, it will probably add much - but the effort may be severe and many will not notice.

Selective contrast or brightness control would also probably help - depending on how the camera was set, more aggressive treatment may be available.

Playing with aperture will confirm or reject the thought that you are getting some perceptible diffraction effects on point lights.

In the days of film, some serious dodging and burning might be invited.

How good is your tripod?
Have you trialed the tripod / camera / timer setup on known perfect point sources with perfect focusing and time delays of the same magnitude? In recent tests at extreme settings and using a focus magnifier I was somewhat surprised at how un-solid and apparently solid tripod mount was and how long it took to settle down after last being touched or knocked . That was extreme (1275mm equivalent focal length - the orbital motion of the Moon at the fl means it takes about 20 seconds for its edge to transit the frame!) but still applicable to your situation and the focus magnifier gives you insight into vibration that the standard viewfinder will never give you.

I haven't mentioned lens quality as it's something of an unknowable and there is enough above to explain what you are seeing (or are not seeing) that really needs addressing before a lens improvement will help vastly. I think! Lens experts by all means disagree.

I haven't mentioned atmospherics, which are also a variable feast and not easily knowable. Evening when cool and calm (or cooler and calmer) is generally a good time in that respect.

I weight down my tripod by hanging my backpack on it when shooting long exposures to stop any extra movement. I find this greatly helps keep the shots sharp and minimize the blur I used to see.

What seems to be a major case of residual "unsharpness" seems to be halos around eg the neon signs in the upper right corner. Since these are overexposed severely (see right of histogram), even the slightest lens flaw artifact (flares, coma, spherical aberration) will be very visible since it will be exposed correctly. Nothing you can do about point light sources like that being overposed without underexposing the background and lit but not luminous object. These lens flaws will be much more a problem at f/6 (try doing handheld at f/1.4 and you will see them in all their glory) than at f/16 - however, at f/16 diffraction could indeed start to be a problem given there are sharp point sources agogo in that scene.

Magazine-perfect urban nightscapes likely use a lot of postprocessing to get rid of halos, or very specific lens choices (ultra-contrast, very low coma primes come to mind), or both.

Oh, and: In case you are using a UV filter, please don't drop it in the river, but do DROP IT!! In nightscapes like that: UV filter schtonk. Fingerprints on rear lens schtonk. Really, fingerprints, nicotine or other stuff on any optical surface schtonk.

Not the answer you're looking for? Browse other questions tagged low-light sharpness cityscape or ask your own question.

9
Why are my night photographs always blurry?
12
Why aren't my night shots sharp even when I shot at ISO 100 on a tripod?
6
Reducing ambient color while preserving sharpness with a flash in concert photos
1
Difference between long exposure in a dim room Vs. short exposure in a well-lit room (using a tripod, ISO 100)
2
Unable to get crisp lights on buildings during pictures of cityscapes at night
4
How can I keep illuminated buildings names from being blown out in night city shots?
4
Why are test images from my Fujifilm X100F softer than I expect?
7
Why can't I shoot with a fast shutter speed with my continuous light at max power?