What is the difference between a soft and sharp image?

I have seen several questions talking about images being soft or sharp. What is the difference? Is soft simply the opposite of sharp in this context, or is there something more to it?

terminology sharpness softness
Share
Improve this question
edited May 29 '12 at 17:02

Sharpness is the opposite of softness but there is a whole spectrum between them. In a soft image, details are less pronounced which means that the difference between adjacent pixels is smaller. Conversely, when an image is sharper there is more contrast between pixels which is sometimes referred to as micro-contrast as opposed to overall image contrast.

The level of sharpness depends on the entire system, not just the lens but also the anti-alias filter all the way to the method used to interpolate colors from sensors which use a color-filter array (Non-Foveon sensors basically).

Check out this demo from the Pentax K-5 review. The K-5 and K-7 have the most sophisticated sharpness control of any digital camera. Sharpness is controlled in 9 steps on one of 3 scales. The default position is 0 but if you select -4 at the bottom scale you will see a very soft image. If you select +4 you will see a sharp image. Note that the setting of +4 is what people call over-sharpened which means the contrast between adjacent pixels was increased so much that artifacts are introduced (just look at the edge of the parenthesis on the left).

What is really interesting is that this is the same image which you can see with different levels of sharpness. Only one shot was taken and it was developped in-camera from DNG to JPEG uses all possible sharpness settings. Of course, the sharpness you start with and how much you get out of it depends on the quality of the lens used. Some lenses inherently produce softer results which you can sharpen by software but limits to how far you can go without introducing nasty artifacts. Even worse is that the sharpness of a lens is not uniform so will usually by highest in the center and also changes with the selected aperture.

Since an image is basically a 2-dimensional matrix of numbers (3rd dimension for colors: RGB[A]), it's possible to define a "sharpness" parameter for it, though the perception of it will be subjective.

Sharpness is related to amount and "quickness" of the changes in colour, and can be evaluated executing the Fourier transform (the Fast Fourier Transform is used because it's quicker) over the image.

So you can define the sharpness as the presence of high-frequency content and its intensity. A way to have an indicative evaluation is to pick an horizontal line of pixel and execute the Fourier transform on it.

For instance, if you pick an uncompressed image with only black and white vertical stripes (maximum sharpness):

and pick just an horizontal line, you'll have something like this:

This is the equivalent of a square wave, which transformed looks like: 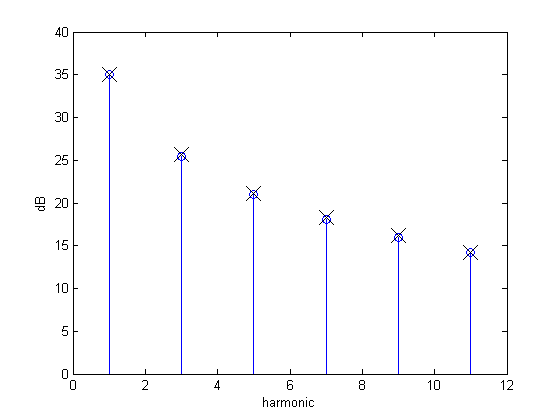 (image the peaks extending to the infinite, as the edge is virtually instantaneous).

If you smooth the edges, the result will be something like (very approximately):

And the spectrum (again, just indicatively): 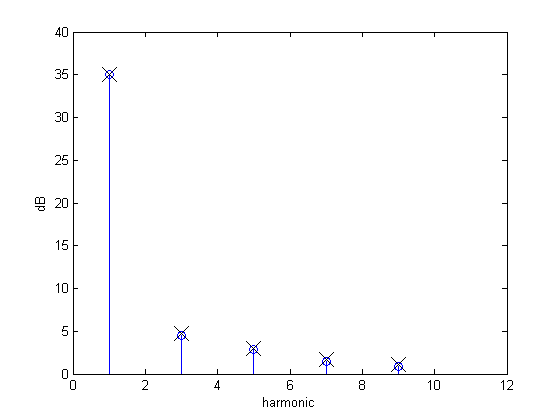 As you can see, only the first harmonic (defining the dark and bright areas) has remained equal, while the higher frequency content has strongly decreased. This is the result of smoothing the image, and you can see how a smoother image has less high frequency content. The same applies for "normal" pictures, where increasing the contrast also increases the frequency of changes.

As an evidence, it's also used in JPEG compression to remove the highest frequency content (depending on the quality factor) to reduce the image size.

If I manage to have Matlab working, more detailed examples are coming.

Softness - in its most basic sense, is a lack of (or less) edge definition (edge contrast) and/or fine detail, when compared with a "sharp" image.

It is not possible for a single coloured image (eg an image containing only a red fill) , or an image with very little detail, such as a gentle fade, to be classed as either soft or sharp, as there is no defined contract area or fine detail to base "sharpness" on.

Anti-aliasing softens edges by fading one colour into another, thereby reducing "sharpness"

@paolo - it would be technically possible to create a mathematical scale rating sharpness - imagine an image of black squares on a white background - if the image was pixel-perfect there would only be 2 colours of pixel - black and white, giving you a sharpness rating of, lets say 2 (lower is sharper) - if this image were anti-aliased, the edged would be slightly blurred, giving you a few extra colours (greys) giving it a sharpness rating of lets say 5 (black, white and 3 greys).

In practical terms it is how narrowly a point is rendered on the image (circle of confusion is one term), more narrow is sharp, less is soft. So in effect, sharp is a synonym for focus. There are software techniques for trying to improve or degrade sharpness but the sharpening is rarely as convincing as the effect produced by a properly focused good lens.

Not the answer you're looking for? Browse other questions tagged terminology sharpness softness or ask your own question.

12
Why buy an intentionally soft lens?

18
What is the difference between luminance and illuminance?
2
Why doesn't pixel peeping with magnified Live View give the sharpest possible image?
10
How sharp of an image should I expect at night?
1
What kind of lighting do I need for a halo portrait?
2
What kind of lens to use to get sharp images of people from a distance?
3
Why are some photos sharp in the center, but soft on the edges?
7
Can using a high resolution sensor and downsampling compensate for a soft lens?
1
What does make a vintage lens not sharp and can we fix it?